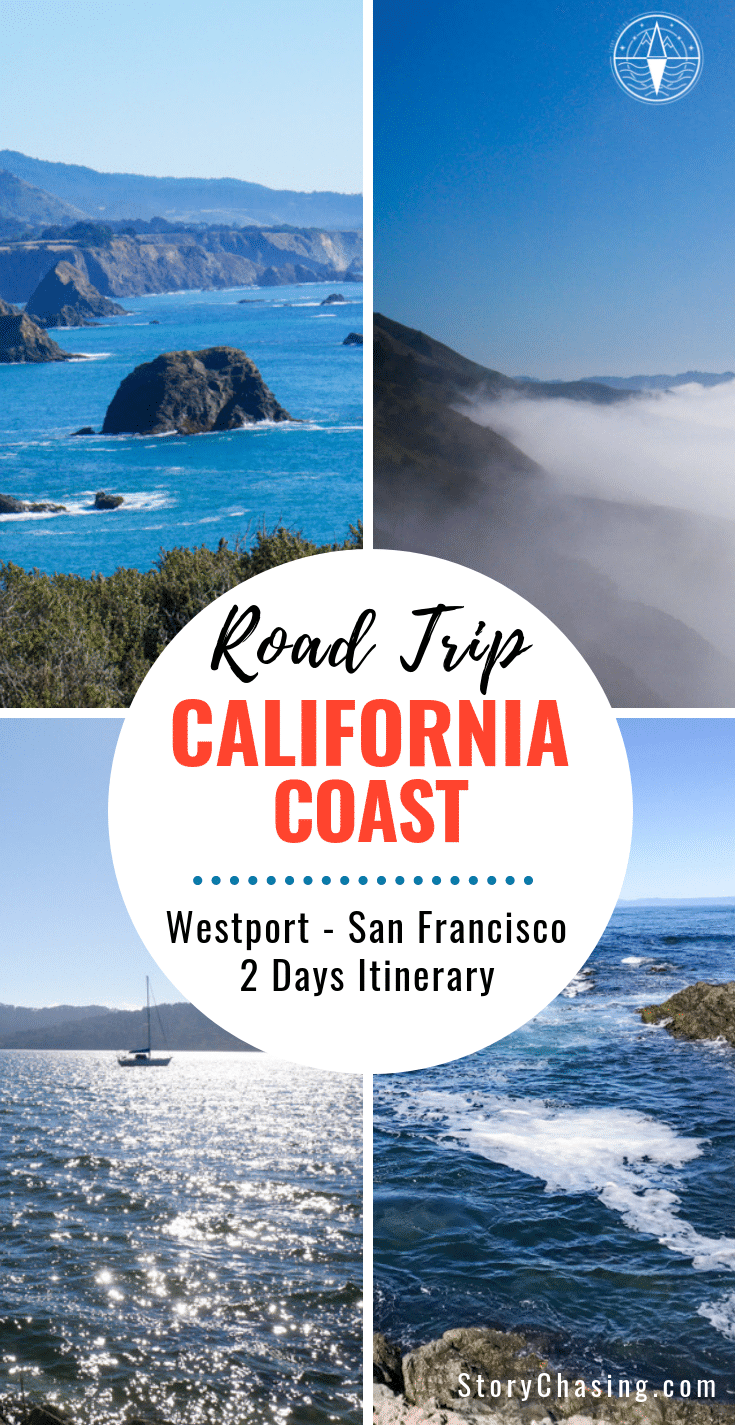 I've loved every minute of it and I'll be sad when I start to turn inland and away from the ocean and her coastal beauty.

Being near the water and her dynamic energy is soothing and energizing at the same time. I enjoy how I feel around her and the colors she displays from one boondocking spot to the next.

After finishing up that crazy drive through California's Lost Coast – I found this incredible boondocking spot just off of Highway 1 on the Pacific Coast Highway.

I lucked out on this spot. It was the only overlook that had a cell signal strong enough for me to work (only if I was using the weBoost cell booster) and even upload videos. It was a large overlook and not close to the highway, so I didn't feel each vehicle pass me by.

The sunsets were incredible every night. 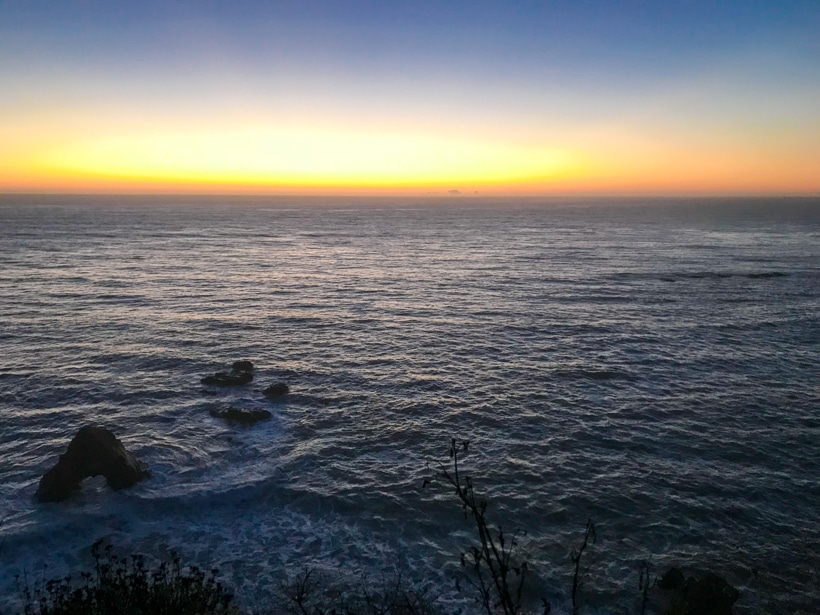 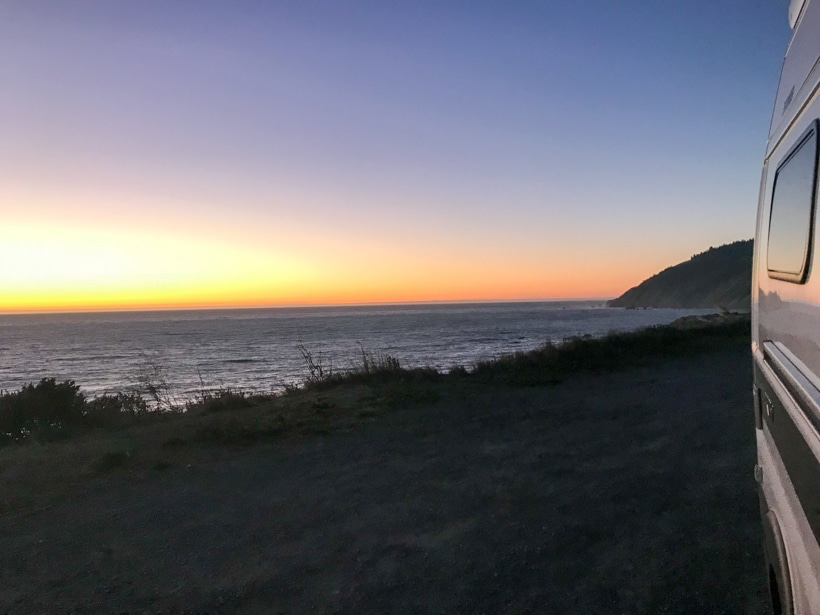 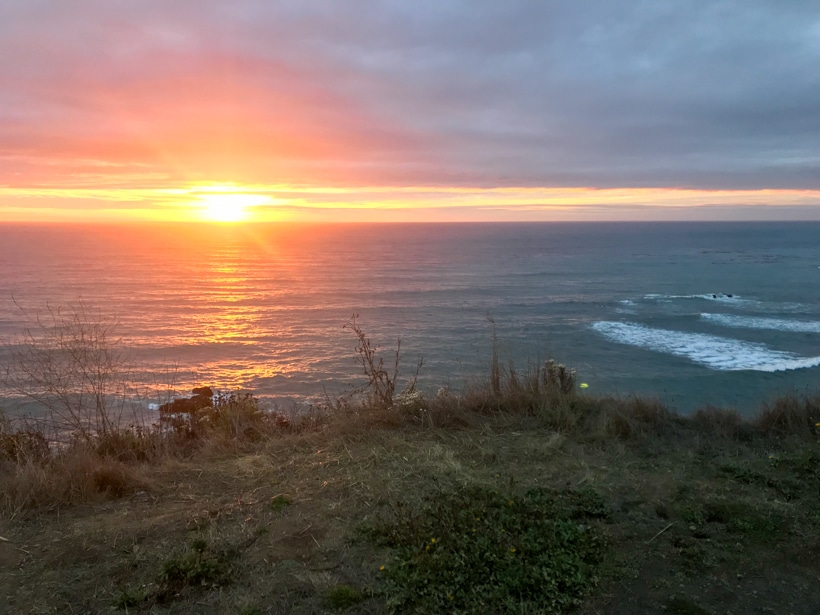 I was relaxed and enjoying the beauty of my surroundings and the night sky lit up with bright stars.

Sometimes I have to pinch myself knowing that this is my life – a life that I've actively created and one where I've fulfilled my biggest dreams! I guess I need to get some more dreams and goals too. 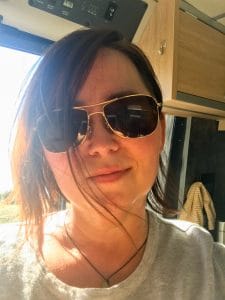 Just down the highway is public restrooms by the beach, so I utilized that to dump my cassette toilet a couple of times. There was also trash bins that I made use of as well. Those are the two main concerns when boondocking in my van. My fresh water tank and grey water tank are large enough that I only need to fill and dump every three weeks roughly.

I know how to conserve very well though and am careful with my water consumption.

After a couple of weeks of enjoying this beautiful area, I left to meet up with Maury from Traveling Solo and caravan down the Pacific Coast Highway with him for several days. He also owns a Hymer Akitv van that happens also to be white like mine.

Once I got into Fort Bragg; about 30 minutes from my boondocking spot, it was time for errands.

I dumped the tanks.

Filled up with fresh water.

Gave Atti (my Hymer and short for “attraversiamo”) a much-needed bath as I could barely see out of the side windows. I may or may not have almost taken the skin off my hand while washing the van. There was a spot on the van that wouldn't come clean, and I went to rub it with my fingers at the same time I was spraying water on it. I thought I had messed up my hand. It hurt pretty bad!

Note to self, keep hands and limbs away from high-pressure water unless I'd like to give myself a “peel” for free – or the cost of a car wash!

…and I stocked up on some groceries. 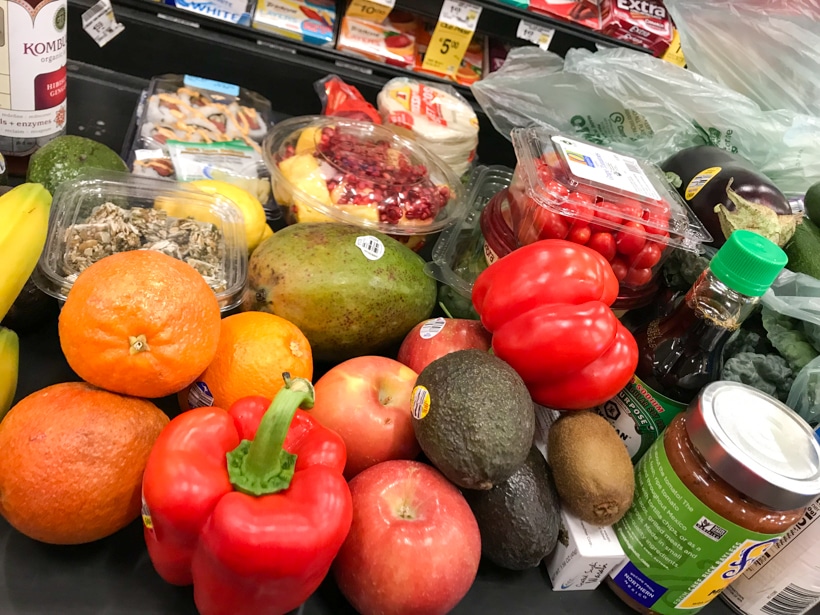 Then headed to the local recreation center for a much-desired shower. Standing under hot water is something I miss that I don't get in the van. Oh well. It's a small price to pay for having everything else be amazing.

Maury and I met over at Glass Beach to see if we could find some of these bright, water tumbled glass that's supposed to be all over the beach. 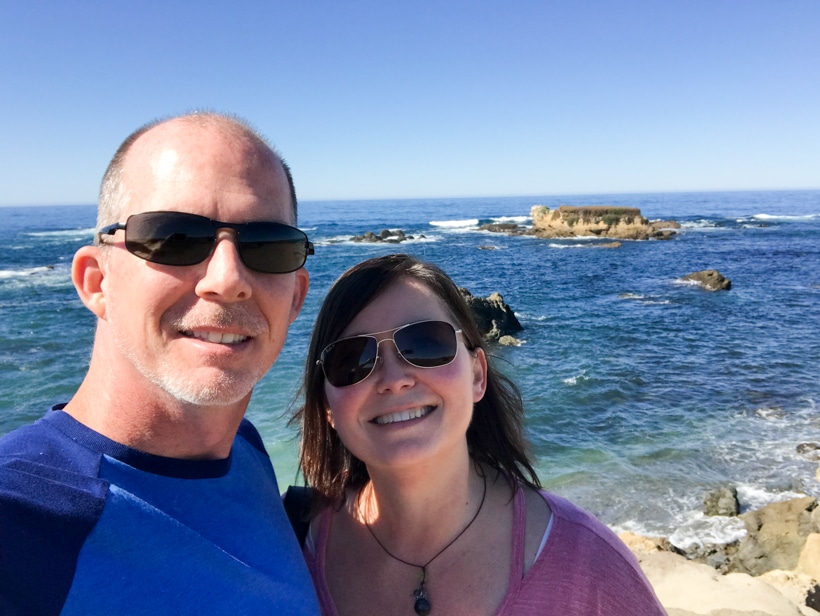 Glass Beach came to be from it being a former dumping ground. The glass would break from being thrown about by water against the rocks and over time turned into these glass pebbles that were smooth and looked like little gemstone rocks. 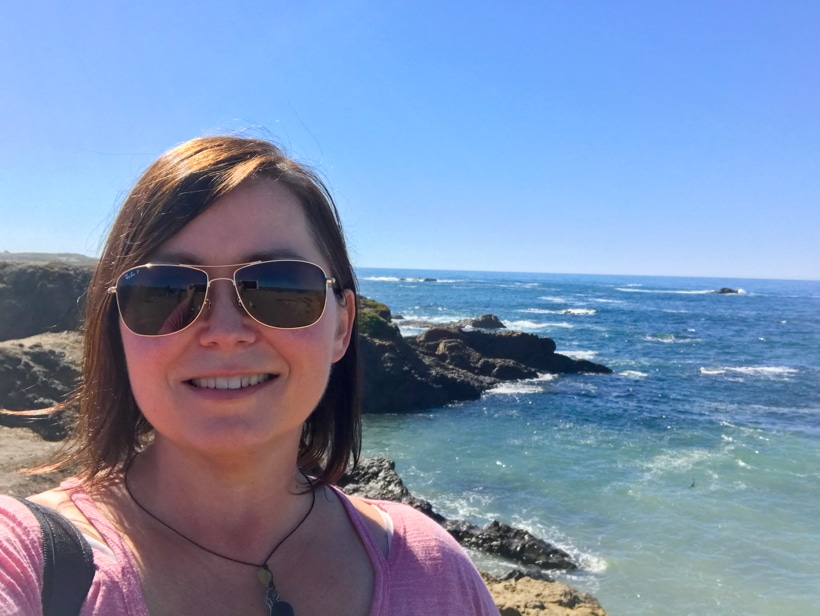 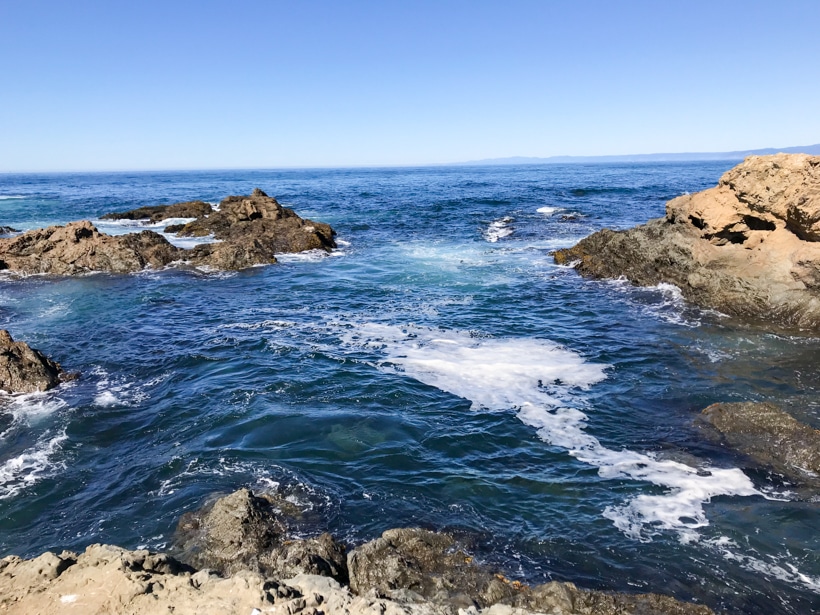 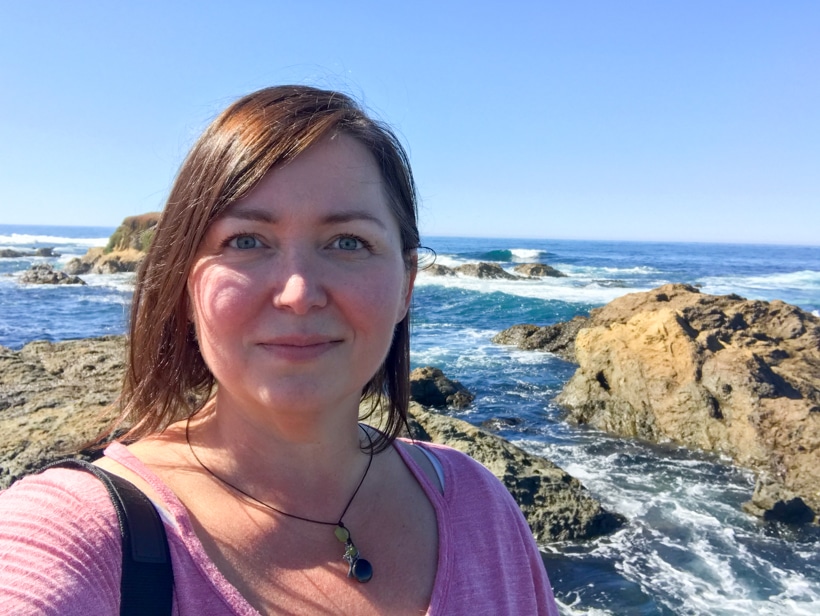 After scouring around the beaches and traversing over rocks, we, unfortunately, didn't seem to find much of this glass on the beach after all. We saw a few little pieces every once and a while, but it didn't look like the pictures we've seen online.

To make matters worse, I somehow lost my Joby Gorillapod when I had my camera slung over my shoulder. I tried to go back and find it, but it was gone.

Continuing down the Pacific Coast Highway, we headed over to Mendocino State Park. What a beautiful sight with the jagged edge rock formations and the water was this blue and green color, almost like what I've seen in the Bahamas. 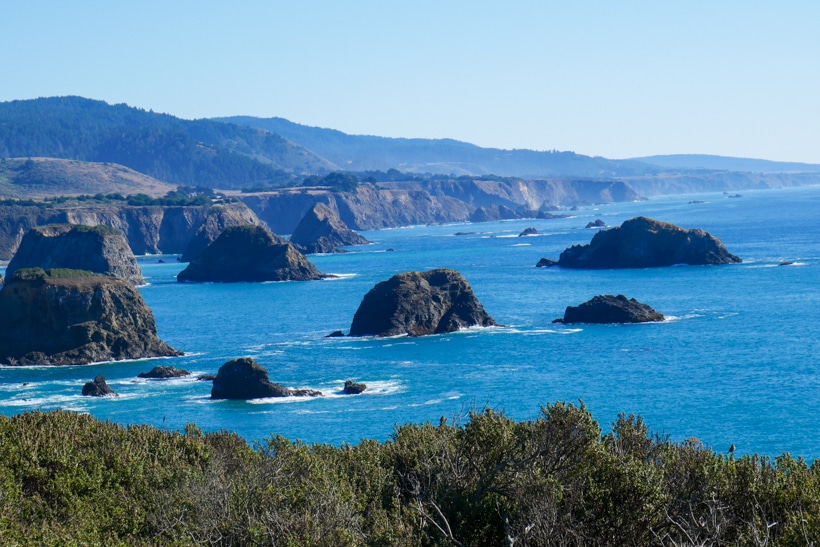 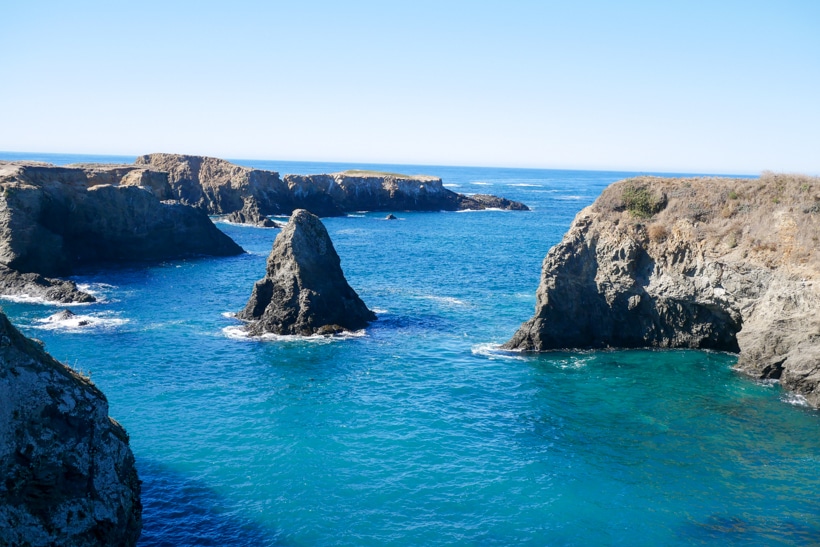 We watched the waves crash against the rocks, and the ocean water follow the path as far as she could go in between rocks, over rocks, until she came crashing into the cliffs.

California condors were flying overhead, and I'm pretty sure one had his sights on Lily. He was flying in fast and low. I was shocked at how low he was. We were walking back to the vans when it happened so I scooped her up, even though she was on a leash, in case that bird thought he could get close enough, even with us there, to attack her.

We didn't stay in Mendocino too long. We had a pretty long travel day and kept pushing forward. It was starting to get a little chilly up north, especially at nights and the fog was starting to stay around a little longer, so time to head even further south. We also needed to make sure we found a place to overnight before dark.

The goal with trying to find overnight spots is for it to be off of the ocean somewhere. It's pretty easy to do, for the most part, around the Pacific Coast Highway until you get closer to larger cities.

After driving the California Coast and stopping at local beaches and overlooks, we settled on Point Arena Lighthouse as our overnight spot. There's a winding road that takes you from Highway One to the lighthouse with several parking areas overlooking the Pacific Ocean.

We immediately found a great spot and made sure the lighthouse was closed before we claimed a gravel parking area for our overnight camping spot.

Again, I feel so fortunate to be in this area and have these lands available to us to gaze in wonder and allow us to camp overnight.

Point Arena was especially interesting for its unique strata, sandstone rock formations, some of which tilt slightly in towards the coast with this almost symmetrical pattern. 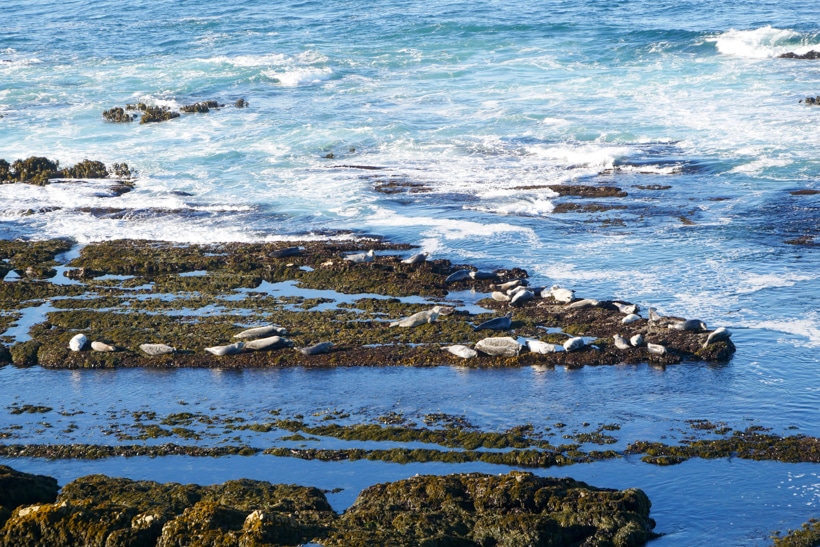 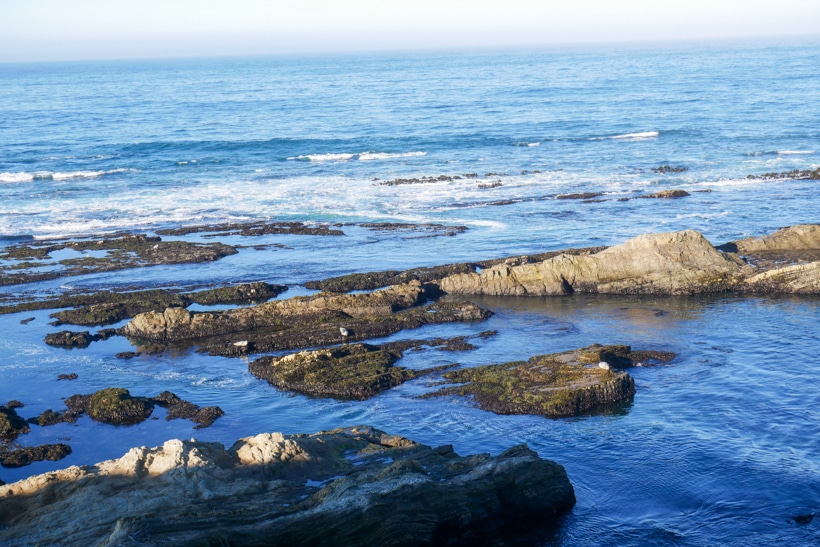 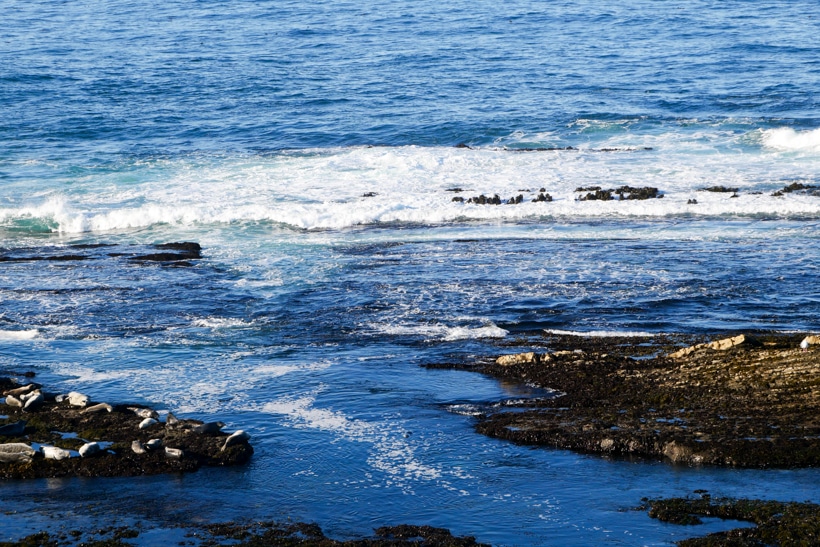 I made some split pea soup for dinner and watched the sun go down and create this picturesque glow off of the ocean. I seem never to get tired of a sunset or how it shapes itself onto the water. It's different every night yet comfortable in the way you know you can count on it to amaze you with its wonder. 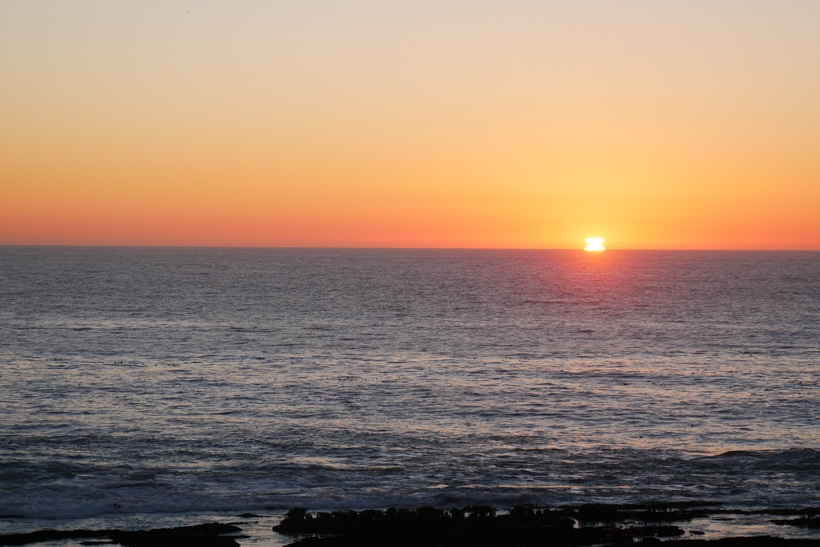 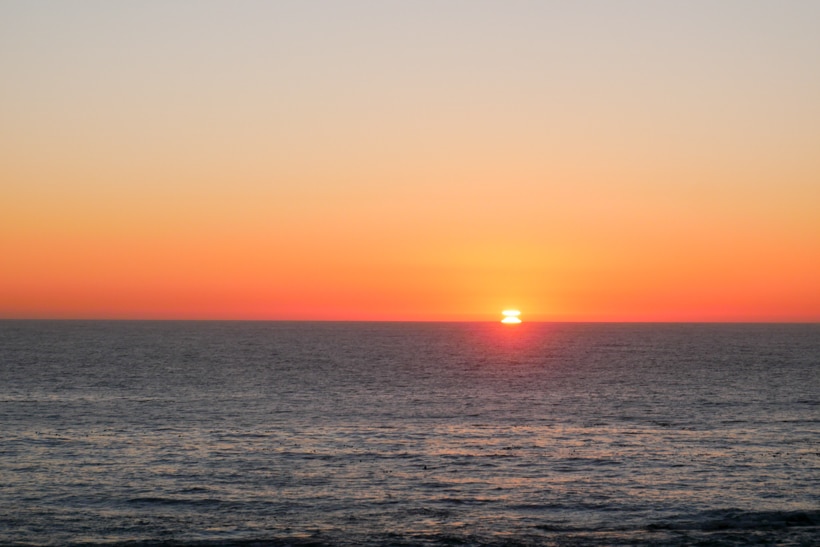 We only stayed here one night so we could keep traveling south. The goal was to make it to San Francisco today and do some sightseeing there. It's been a while since I'd been in the city, so I was looking forward to exploring.

We came across this interesting regional park in Sonoma County where there were large wooden carvings dedicated to Siberian ancestors during the Summer Solistace of 2014. 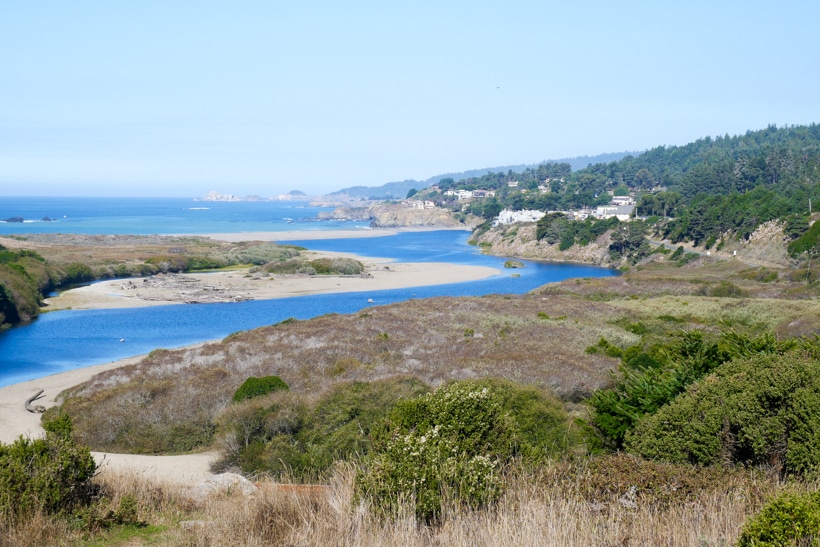 The logs were brought onsite and then carved there into ceremonial hitching posts in this sacred site by Master Carvers from Yakutsk, the capital city of the Sakha Republic in Siberia. 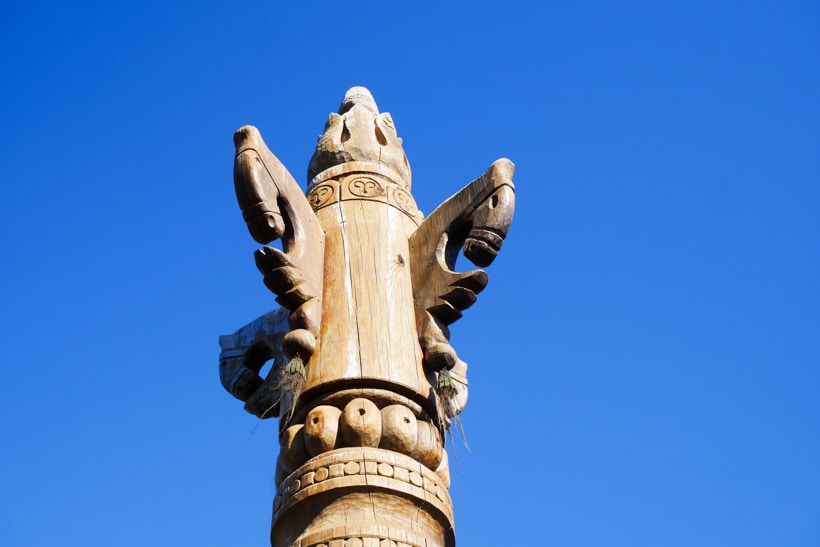 These posts are called Sergeh's and are typically placed near homes as a way to ward off the harsh winters in Siberia.

What a treat to witness the beauty of these Master Carvers and skills and the intricacies of the Sergeh posts.

Pushing on we kept heading south down Highway 1 where we encountered everything from winding roads, beautiful forested areas inland, coastline roads, and lots of marine layers.

Signs suggest that no vehicles over 40 feet should be traveling along this coastline and suggest that all vehicles be under 35 feet. I couldn't imagine doing anything much bigger than my 20-foot van. We even saw deep scratches in the roads on some of the switchbacks turns where RVs or trucks trying to take the turn bottomed out. I imagine the hitch was what was hitting – I hope.

The fog and marine layer at the top of some of the Pacific Coast Highway peaks were just breathtaking. It was like this blanket of clouds, and we were actually above it in some areas. I could see the clouds float by quickly just over my head where I could reach out and touch it. 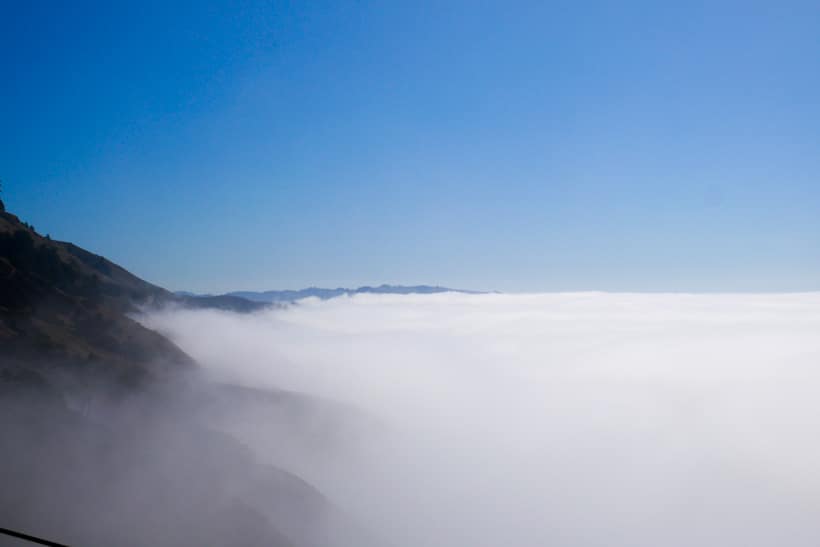 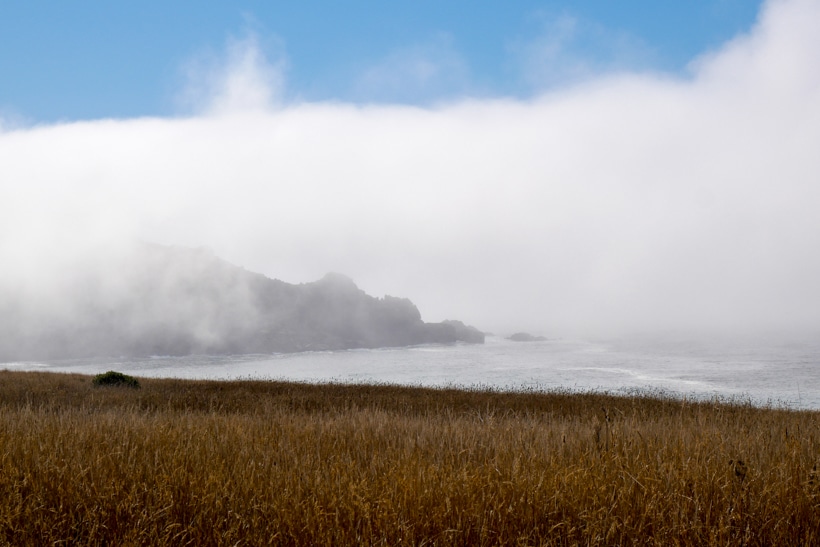 We attempted to see Goat Rock State Park, but there was so much fog we could barely even see down to the ocean. So onward we went further south through Bodega Bay and other small little towns off of Tomales Bay.

It wasn't long before we headed back inland and on into San Francisco where we stopped for the night to rest. We found a visitor center on the southwest side of the Golden Gate Bridge to overnight. Unfortunately, you couldn't access it until you traveled over the bridge, so we had to turn around and go back over and then head into the visitor center. It's $8 one way so in all we paid $16 since we had to travel back over it the next morning to continue south.

It was worth the $16 considering we didn't have many overnight options for parking unless we tried to find some stealth parking. By that time though my arms and shoulders weren't feeling so great from navigating around all the winding roads.

The visitor center was quite the experience. It was full when we arrived during daylight with a lot of cars and people visiting the Golden Gate Bridge.

What a hot mess!

It did quiet down, around midnight, and the parking lot cleared, except for maybe 5 or 6 other campervans. I didn't see anything bigger than a campervan, and it would have been hard to park in that area.

It was free, so it worked out well.

What has your experience been traveling along the Pacific Coast Highway? Have you tried boondocking in any of the overlooks? 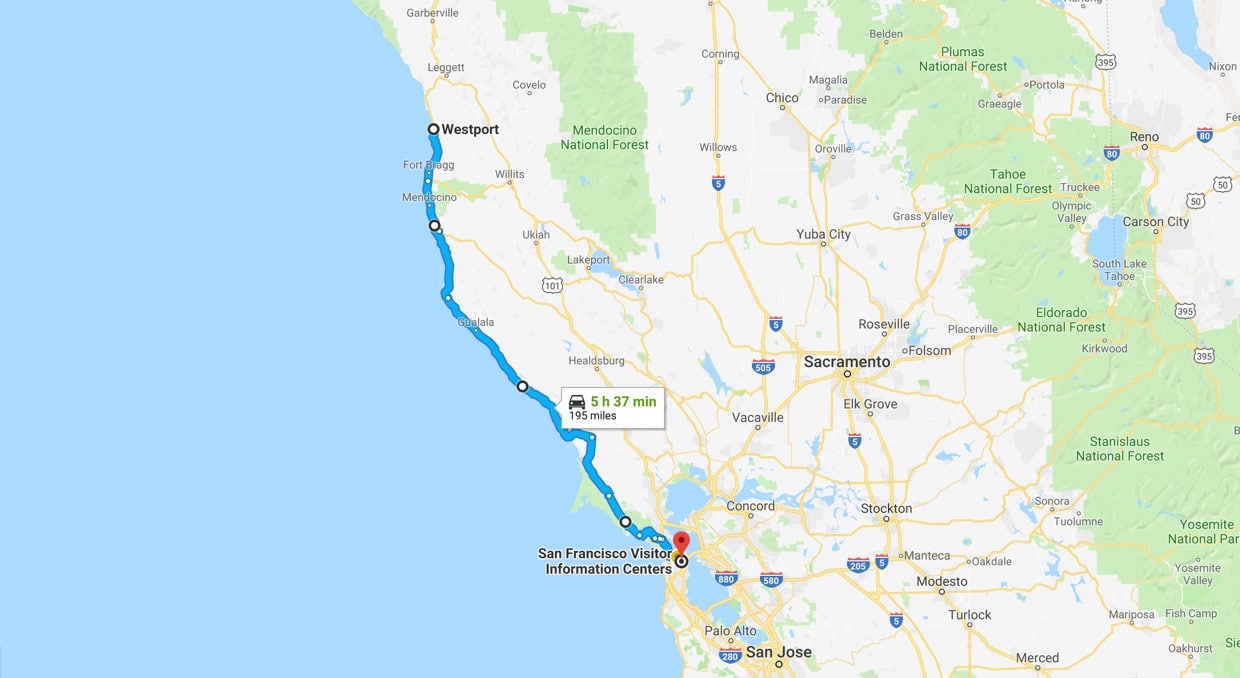 Road Conditions: Roads were clear, but really windy, with switchbacks, and narrow areas.

Weather Conditions: Chilly at night, sunny during the day with some marine layer/fog.

Cell Phone Signal Strength:  Some areas were great and some had no cell signal. It was very spotty, but there were enough small towns in between that it wasn't an issue. AT&T was stronger than Verizon and you'll definitely need a cell booster, like the weBoost that I use, to get a better signal if you'll be working or watching movies.