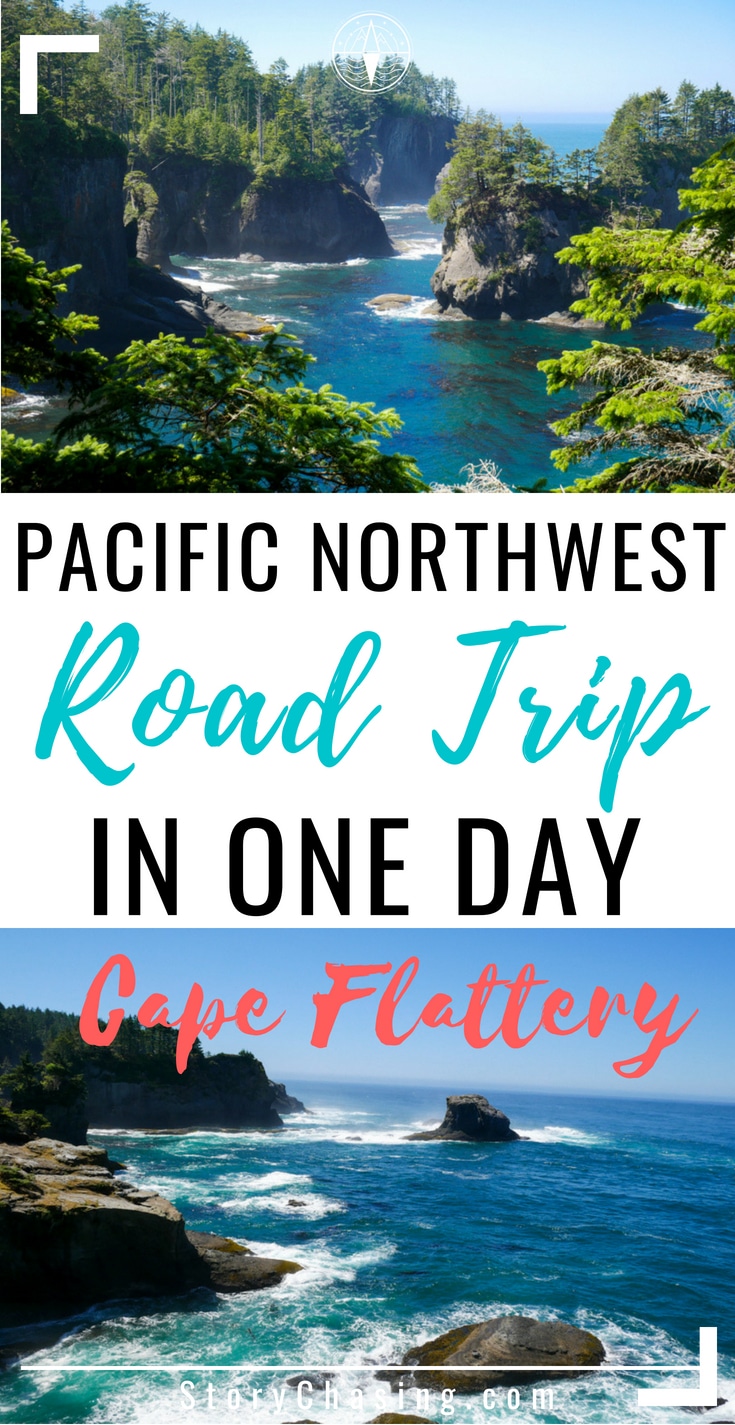 I couldn’t come all the way out here and not travel over to the farthest Northwest corner of the lower 48 states which is Cape Flattery at Neah Bay on the the Makah Indian Reservation. This is my first time in all my 15 years of living in Washington state that I've traveled to Western Washington and to Cape Flattery.

I know – I can't believe it either!

Since it’s the end of the day, and I did quite a bit of sightseeing on the Olympic Peninsula drive, I’ve decided to stop for the night at a place I found online for some free camping, called Lyre River Campground. You only need a Washington State annual Discover Pass in order to camp there for free.

There’s very limited spots, but I thought I’d just try to see if there was anything available. It’s the middle of the week and not a holiday so my chances are better, but there’s not much out here for free so it could have turned out that it was completely full.

I snagged the last open spot and feel so fortunate there was one left; else I would have driven all the way to Neah Bay and had to, most likely, pay for a dispersed sight at an RV park.

While there I met another couple who actually built out their Mercedes Sprinter van and started on this full-time nomadic journey just 6 months after I did. We all have similar stories of having some wanderlust in us and this idea of living more simple and seeing these beautiful lands.

They also work from the road and just roam where they want. They told me this story of how they found a place in Oregon to have lunch and then they were going to keep traveling north, but ended up staying three weeks.

We do that sometimes.

We get to a place, fall in love, wander around and explore, and then move on.

I guess that’s one of the perks of having your house with you all the time.

Preparing the Camper Van for Travel

Well, I thought I was going to get up early and drive to Neah Bay and Cape Flattery; however I must have been really tired because I woke up and it was 8 am. Of course I was trying to work last night, but the Internet connection at my spot was awful. Even the cell booster wasn’t boosting enough.

After walking Lily and making a strong cup of coffee I prepared the van for travel, you know like:

Oh wait, I forgot to eat breakfast. It’s one of those mornings where I’ll just eat on the go, so I grab a banana and some more freshly picked raspberries that I picked at a berry farm in Sequim, Washington.

You’ll see that in the upcoming video. I realize it’s a bit out-of-order. I started the Olympic Peninsula quest drive, but then part way through there is a different quest drive, this one, the strait of Juan de Fuca that you’re reading about now that would require me to travel back over 200 miles if I didn’t do it now.

So I did it now. Anyways, I picked the berries in the next episode which, historically is before this episode in real-time, but after in blog and YouTube time. Hope that makes sense. 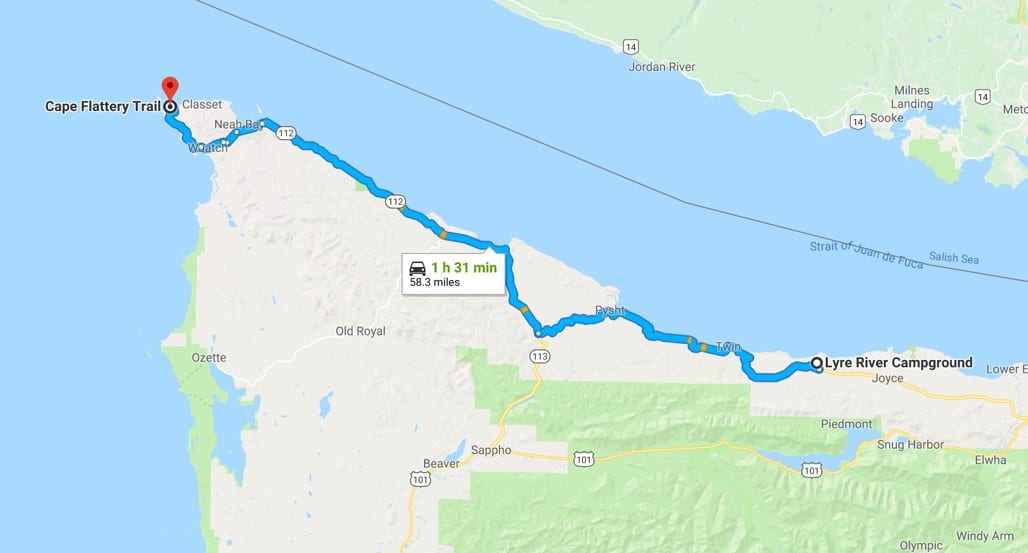 I’ve been on some incredible drives over the last year, but this one is right up there with:

…and well… I’ve never said this one before –

At least for me. I’ve never gotten car sick driving myself, but wow – this one really got to me. I don’t know if it’s for the lack of eating something more substantial and having a triple shot of espresso in my coffee, coupled with the excitement of hiking to Cape Flattery.

I had to pull over a couple of times and just breathe and that was no easy thing either, because there are warning signs everywhere, for approximately 40 miles of these winding roads that are between 15-40 mph (25 mph being about the average speed) that this area has slides and washouts. 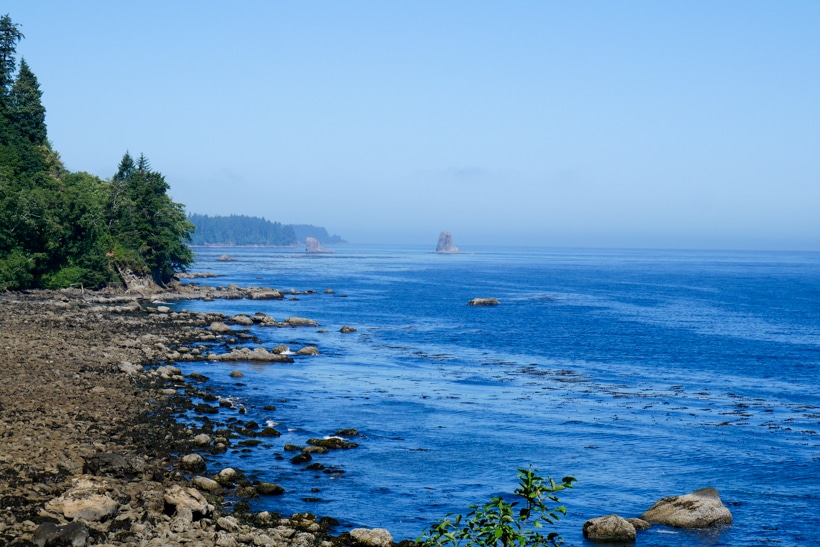 The last thing I wanted was to feel sick, pull over and have a slide take me out.

Despite the sickness and the ever-present notion that there could be a slide or a road washed out down the cliff side and into the ocean waters, it was still a fantastic drive and I’d do it again.

The roads were somewhat rough in a couple of areas and signs giving you plenty of warning for bumps, but most of the road was pretty smooth. 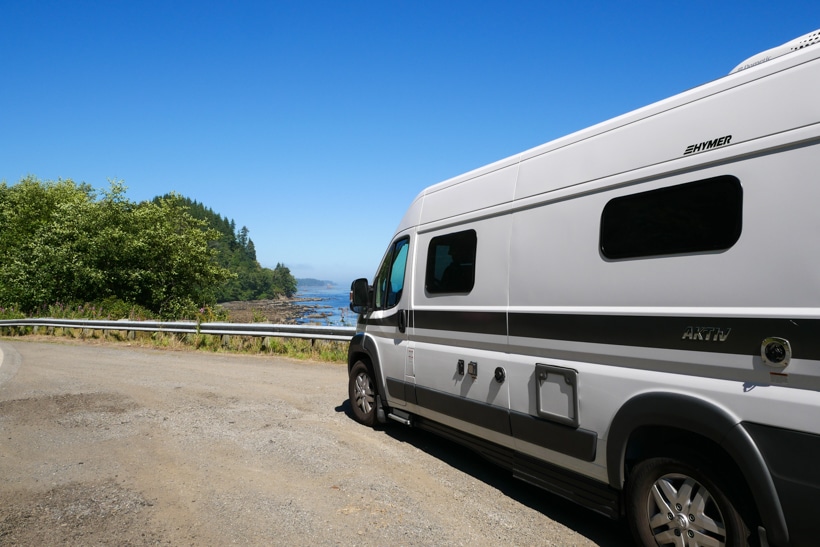 In order to actually get to the most Northwest tip of the continental United States, you have to actually hike out there for 1.5 miles from the trailhead.  Since Cape Flattery is on the Makah Indian Reservation, they require you to have a $10 recreational permit, which you can obtain from several locations in order to park and hike the trail. These locations can provide you with the permit in Neah Bay:

So before heading out to Cape Flattery for the hike I stopped by the Makah Mini Mart to pick up my permit and hang from the rearview mirror.

Then it was another 8 miles of winding roads, so about 20 minutes, until the trail head of Cape Flattery. 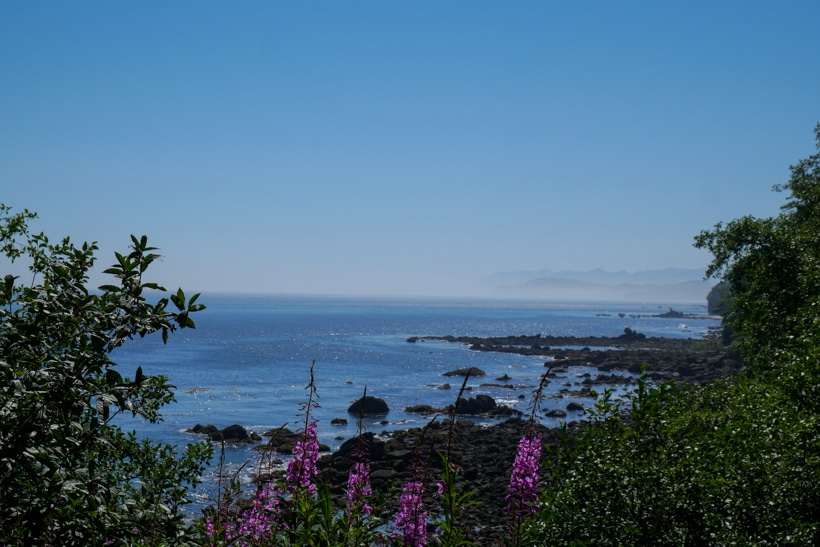 Once I arrived at the trailhead to Cape Flattery, I geared up with my Camelbak backpack and water supply, another banana, some sesame crackers, walking poles, camera, and dug out my hiking shoes since it’s supposed to be a little muddy in some areas.

Lily was geared up to with her walking harness – and well that’s it – except for the leash attached to her harness.

I was so glad to see they allowed dogs. Since this on an Indian reservation they seem to be a little more lenient as National Parks would never allow it.

The trail immediately starts off in the forest where you can hear water trickling through small streams and water falls somewhere deep in the forest.

Sometimes there was just nothing but stillness and quiet, save for the occasional hiker walking as well. People of all ages were hiking. Some with dogs. Some with kids. Some solo.

What I loved was to see their faces as they rounded each turn and marveled at the beauty as well. People were quiet and seemed at peace on this land. Maybe we were all just looking forward to the reward at the end.

The hike is 1.5 miles and all downhill with all different types of terrain from hardpacked dirt, mud, carefully planted walking stones, large tree roots to be navigated over, wooden planks rising above the muddy ground, and stone steps that gradually allowed us to peek around trees and see blue ocean beyond.

And then – there it was.

The beauty at the end of the trail. The reward for driving over 60 miles (at least from where I started that day), paying a $10 permit, walking the 1.5 miles downhill knowing it’s another 1.5 miles back uphill all the way, the motion sickness from the winding roads, and defying death from washed out roads or landslides. 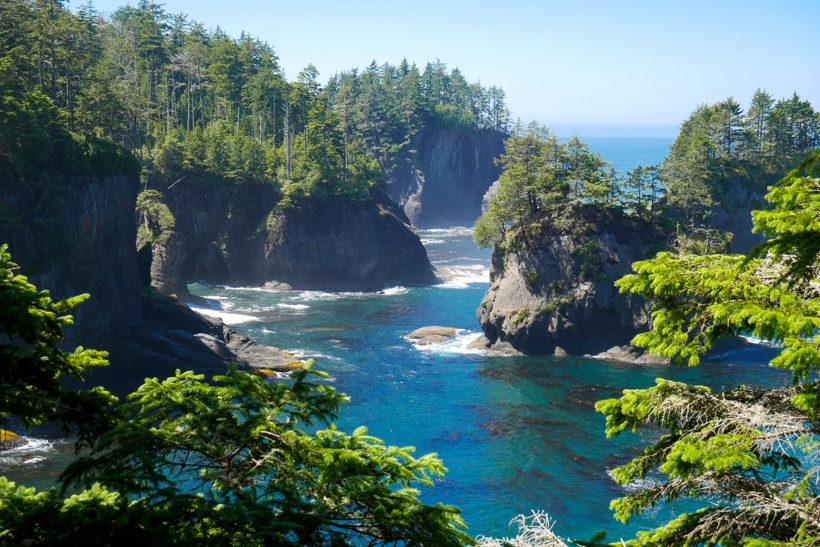 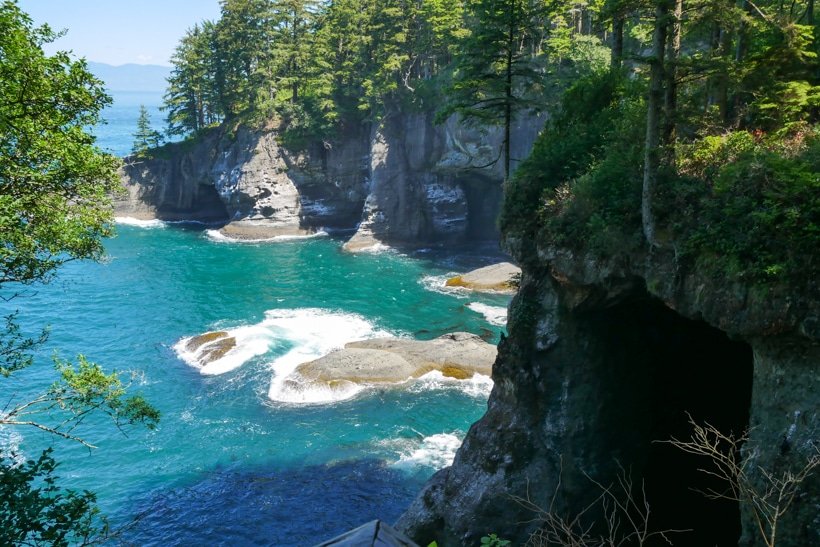 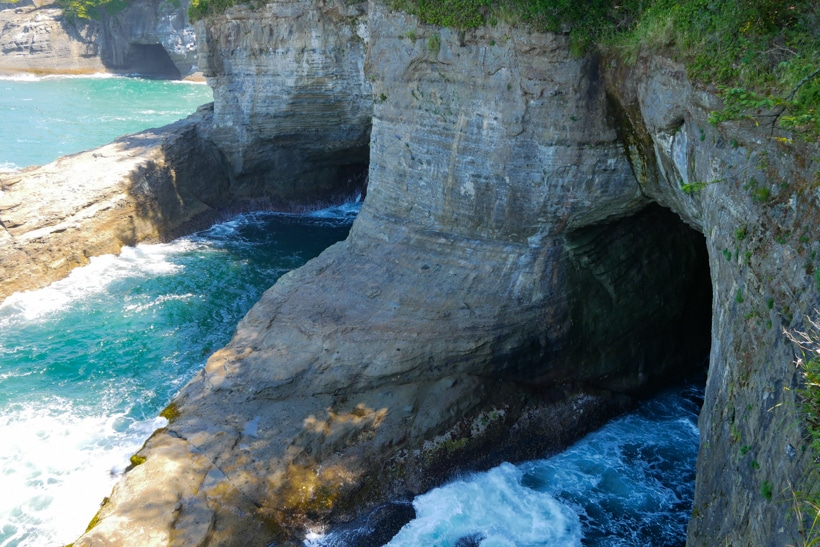 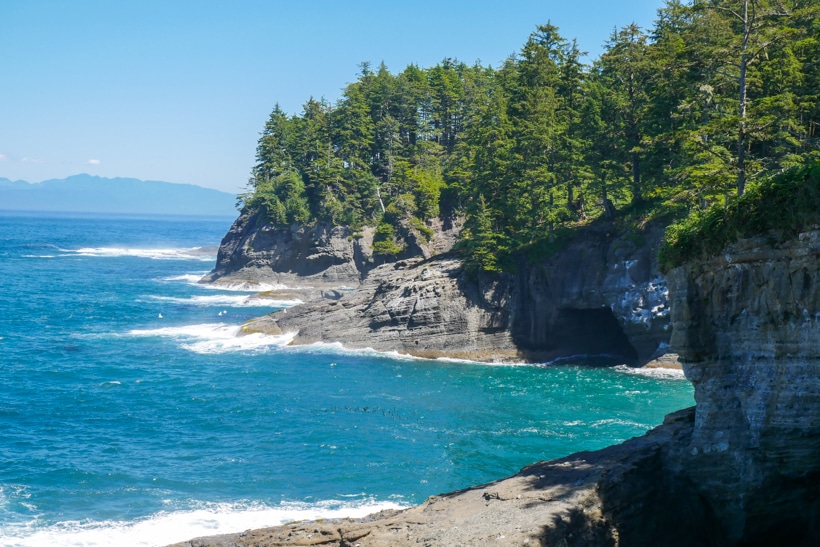 Was it worth it?

I would do it all over again in a heartbeat.

The raw beauty of the blue Pacific ocean water tossed against the cliffs and rocks. Waves turning into giant, foamy splashes as it crashes against magnanimous rock formations and hollowed out caves in the cliff side. 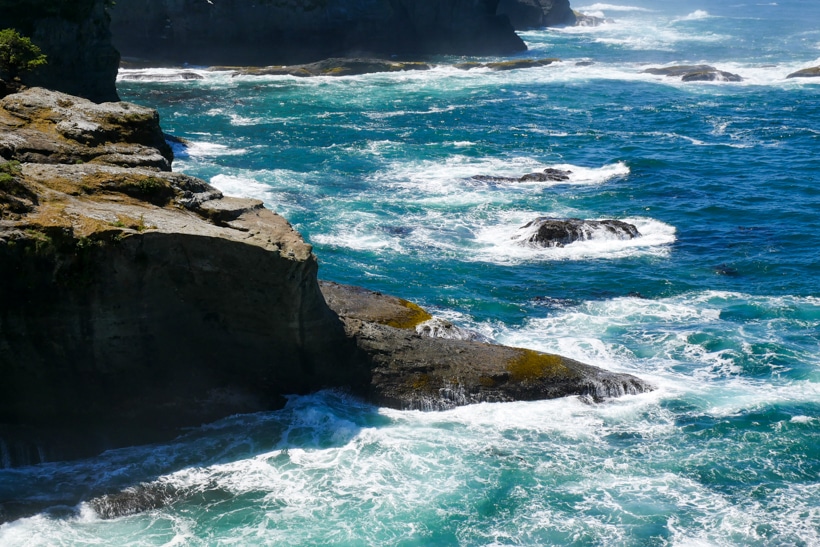 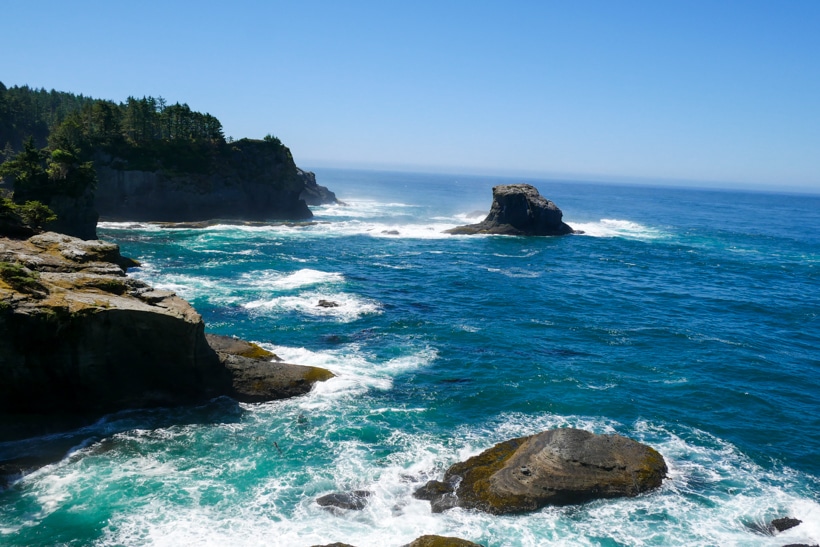 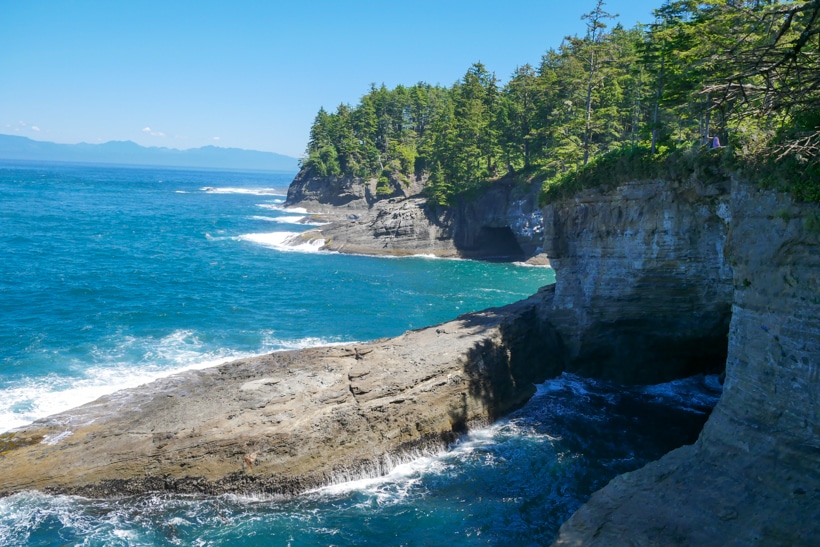 What is it about water that seems so calming? Even with its angry waves that can cause so much destruction?

It’s calming presence creates this meditative state that relaxes me. Her waters make me feel free and alive. Just breathing in the saltwater fills me with such happiness.

Listening to the water flowing back and forth, crashing against the beach, and going back out to sea soothes me. 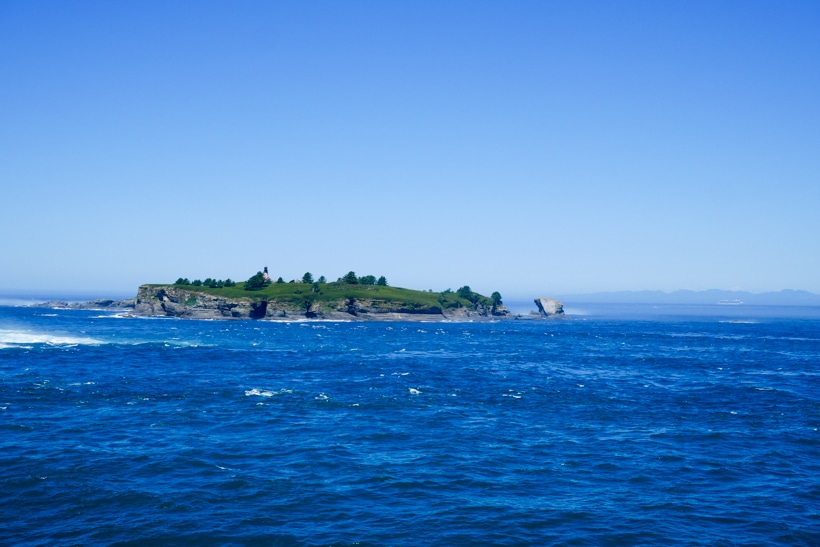 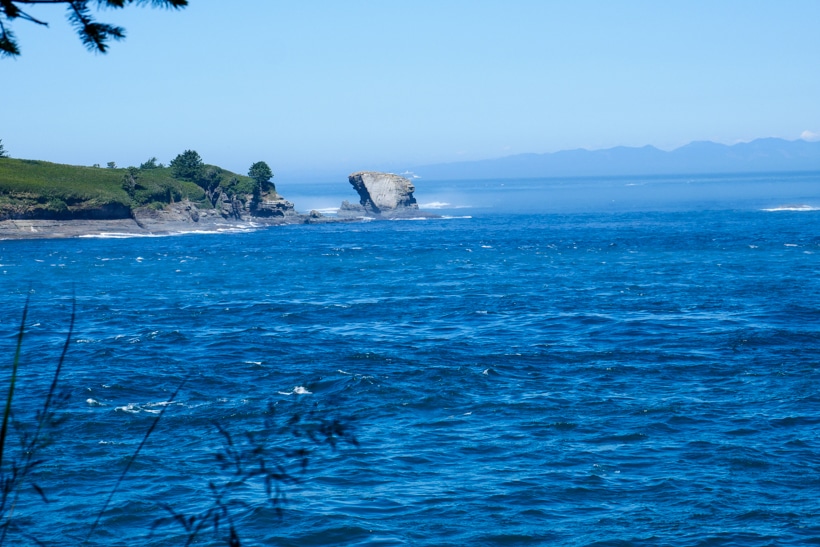 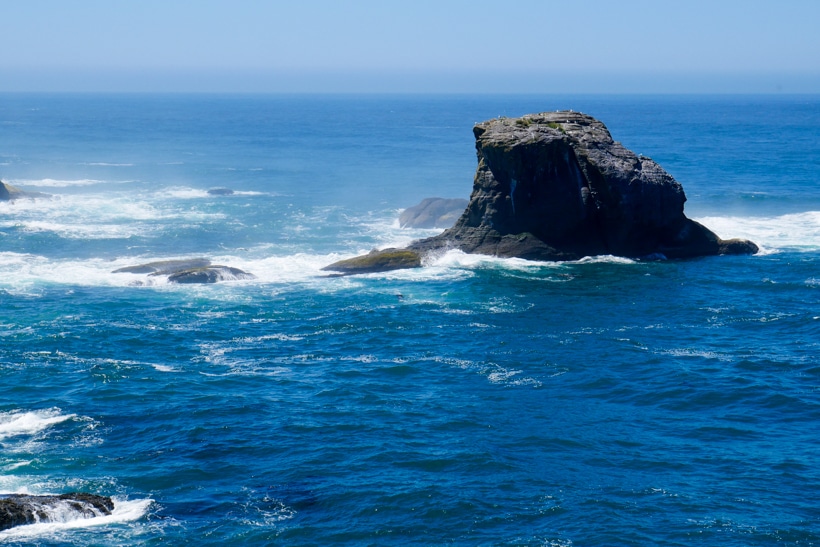 I didn’t grow up around the ocean, but something pulls me towards her.

Lily and I hung out for a while just gazing at the blue water and chatting with others over the incredible sight, then we started back up the hillside and back to the camper van.

Finally – a Name for My Hymer Aktiv

It just hit me.

As I was writing what the blue ocean waters means to me and how she makes me feel, then how Lily and I were headed back to the camper van, and it clicked. A name for my Hymer Aktiv van!

Her name is Oceane which represents the feminine word for ocean.

She personifies all the things that calm me about the actual blue ocean waters, running rivers, and glacier lakes:

Yes, this is her name. Oceane!

Now I can always have the “ocean” with me! Okay corny, but yes it’s true.

What a great day.

I ended the day with the drive back to Port Angeles, Washington to continue on the Olympic Peninsula quest drive.

See you on the road my friends. 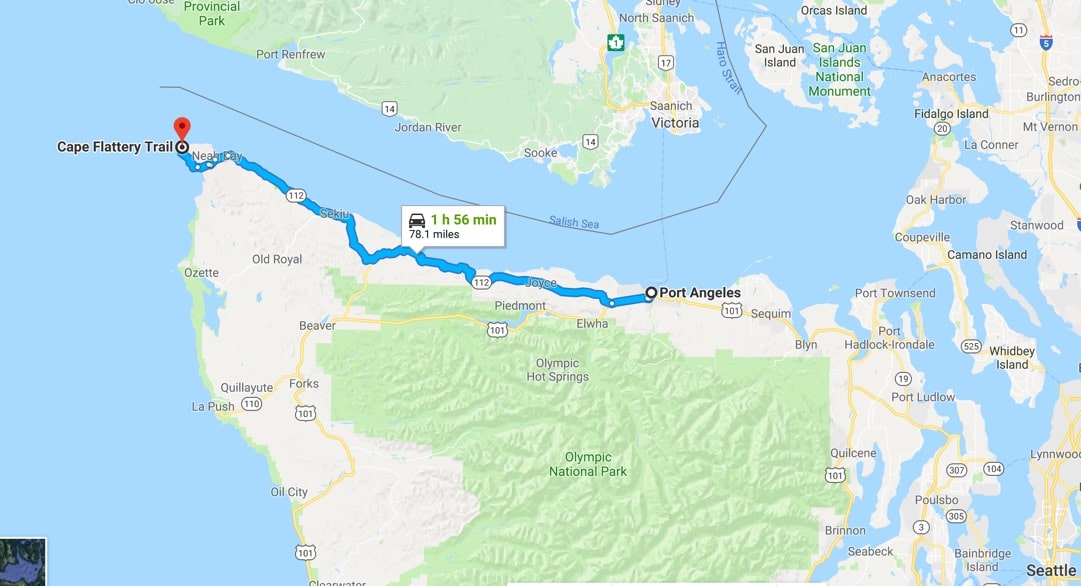 Road Conditions: Roads were fairly smooth except in some areas that were clearly noted for bumps; however this scenic byway has 40 miles of warnings for slides and washouts. Roads are very winding with 15-45 mph limits with an average of 25 mph through that 40 mile stretch.

Weather Conditions: Temperatures were cool in early July between 58 – 75 degrees, full sun, and no clouds on this day.

Cell Phone Signal Strength:  0-1 bar at Lyre River on the AT&T network and the Verizon network even cell boosted I had issues. No service at Cape Flattery and very spotty 3G service on the drive to Cape Flattery and Neah Bay.