Lake Tahoe scenic loop was, so far, one of the best routes I've been on and also the scariest moments of my life.

This was a week of overcoming fears.

My first fear is going through the mountains with my new RV – Liz. I don't know how she'll handle with the climbing and descending. 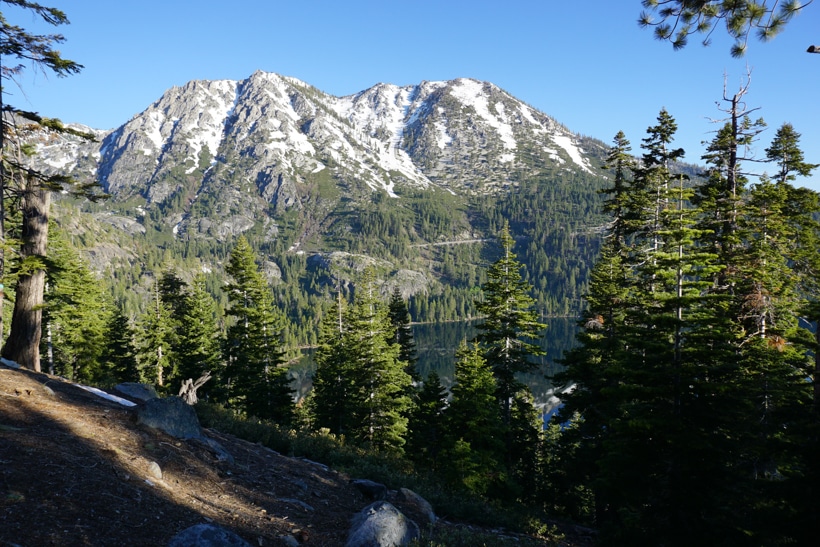 Going up is okay, but coming down – well – that's the fear. Liz is heavy and she'll push me down that mountain fast, so I need to make sure I understand how she handles to control the speed.

I can't just brake the entire way down or else I'll burn up the brakes. Thankfully, Liz came equipped with a tow/haul function so it gives me power as I climb and engine brakes on the way down.

I'm still getting accustomed to how she handles with the tow/haul function. If I don't time it just right, where I'm in tow/haul mode coming up over the hill to go down the hill and I need to make sure I'm slow enough, then I could speed out of control quickly.

The trick is having her in tow/haul all the time when in the mountains and breaking hard enough at the top of the hill that when you engage the brakes, the engine braking system kicks in and holds you at that speed. Not once did I have to brake going down hill – in fact a couple of times I pushed on the gas pedal to speed up just a bit.

Don't forget your hazards either as your going up and down the mountain sides so people traveling faster than you can see you. Trust me, these people speed past you quickly so I want to make sure they see me going slower.

My second fear was the narrow roads around the Lake Tahoe loop where there was no guard rail – just a cliff that dropped into the lake, but first bouncing through trees all the way down. 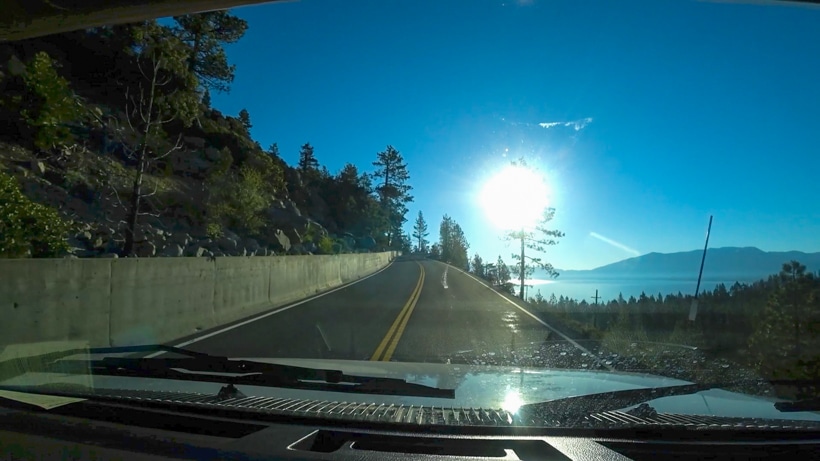 My heart was beating so fast – I think I even started to sweat – and I might have said something like, “Dear God get me through this, because I can't go out of this world at the start of my RV life!”

….and in case you're wondering…..  I'm pretty sure he replied with, “Well stay on the road and I won't see you so soon!” 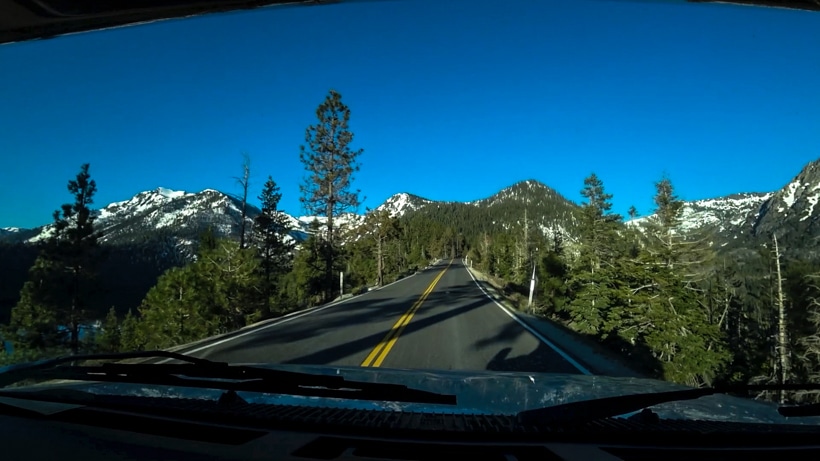 Needless to say, I made it through even though I wanted to turn around, but there was nowhere to turn around so whether I wanted to give up or not was pointless. I can laugh now, but I assure you, I wasn't laughing then.

Fear gripped me, but I conquered it.

On the other side of fear is the dream we've been chasing.

My dreams have come true. I'm happier than I've ever been.

I've noticed I look people in the eyes more and geniunely ask them how they are doing instead of using it as a greeting. The most interesting conversations have sparked with that one question, but delivered from the heart.

Before I set out on this scenic loop, I didn't research to find out more about the parking situations for RVs. The only thing I knew is that I had just arrived when they were opening everything for the season. With the late winter snows this region received, they were just opening before Memorial Day weekend.

The route literally takes a loop around Lake Tahoe, sometimes hugging the lake, other times looking down at the lake from steep cliffs while winding through narrow, curving roads amongst the mountains. 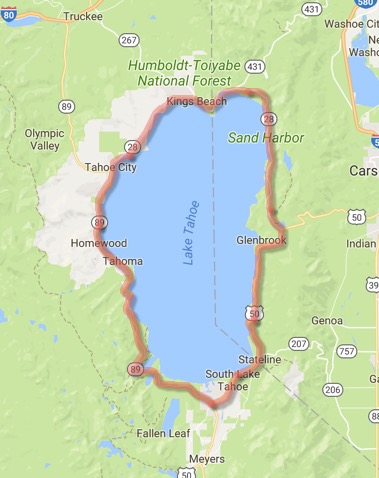 It took me almost 6 hours to complete, though National Geographic Scenic Highways and Byways shows 3 hours. However I stopped frequently and I was in a slow RV.

I did see some delivery trucks along the loop; however to stop and sightsee is difficult if not impossible due to spaces to park. The parking spaces are definitely made for normal size cars and not recreational vehicles. I started my trek very early in the morning when there were few travelers on the road so that I could squeeze in where possible, but I certainly couldn't do anything long term. 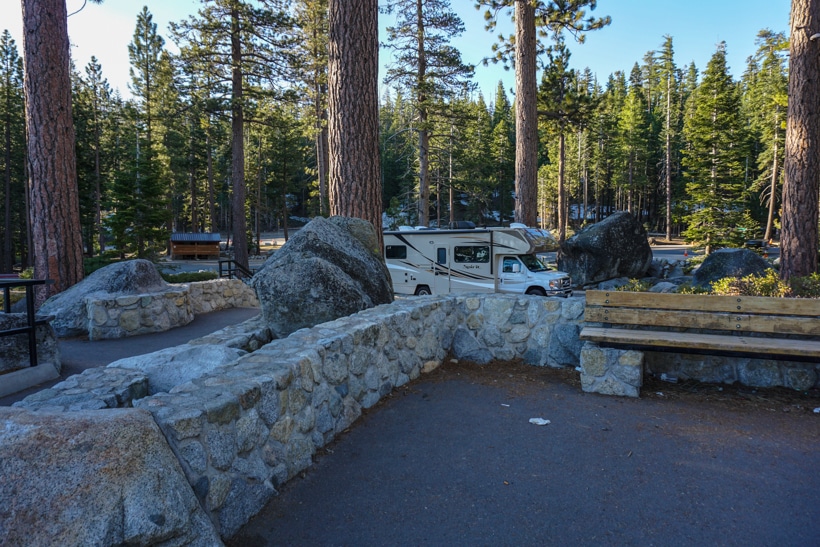 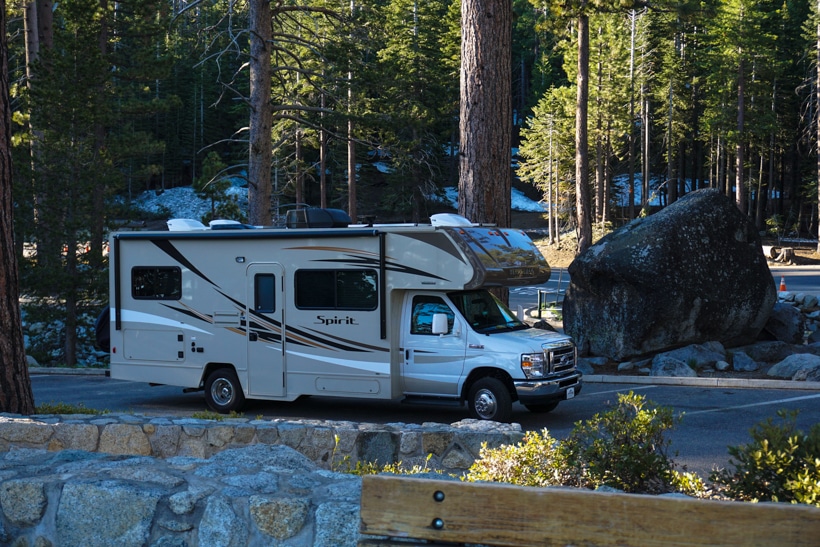 Also, dogs are not allowed on the trails on the California side, but it would be safer to not have them at all on any trails as there are definitely bears. I was cautious especially since it was early morning and was literally the only one out in certain areas.

I used my Passport America membership and found an RV Park called Tahoe Valley RV Resort for $32 per night.  That included a resort fee and was considered half off the normal rate. The staff was very friendly and helpful during my one week stay there. Though I came at the wrong time as the trolley into town wasn't working yet, the pool wasn't ready, and they were trying to get ready for the opening season that weekend.

So as they zoomed by in their carts, they would travel between camp sites kicking up dust everywhere. I did call them to ask if they could take an alternate route, but unfortunately my request was not accommodated.

Maybe that's normal at RV parks? I wouldn't know because I just don't choose to stay at them that often since I'm completely self contained with solar panels, black/grey water tanks, fresh water tanks, propane, and a generator in an emergency.

This was my first week back from vacation so I used the week at the RV park to get caught up on work, do laundry, and clean out the RV. Just a little light housekeeping.

So far, Lake Tahoe has been my favorite scenic route mostly due to the variety of beauty with the mountains, lake, woods, and the peacefulness of it all. 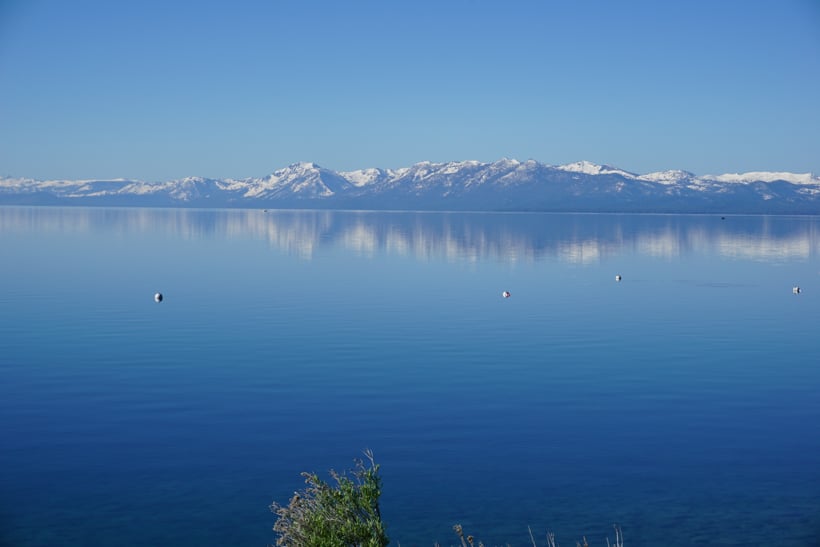 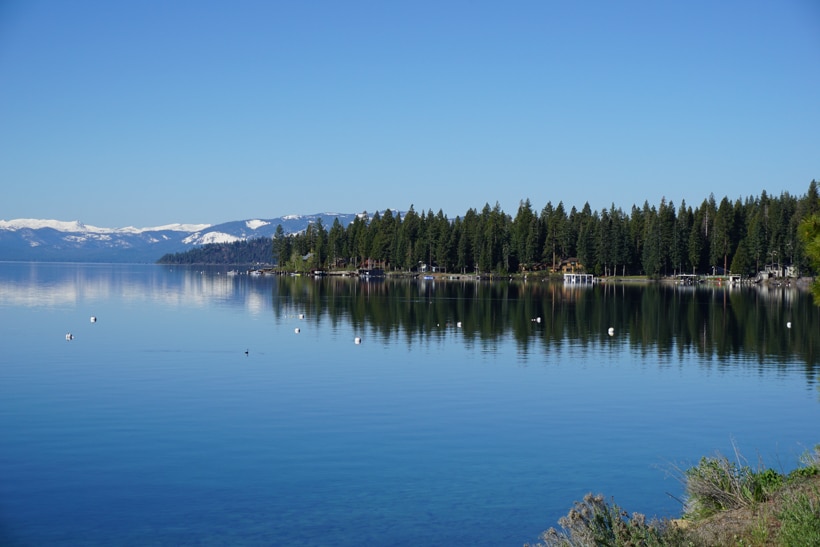 When I saw Lake Tahoe, early in the morning, at Tallac Museum, I couldn't believe how still the water was. It looked like glass. Birds were singing. I stood there and meditated as I looked out over the water – but not for too long because I didn't want bears to sneak up on me.

I would love to hear from you if you've ever complete the Lake Tahoe loop in an RV so leave me a comment below.

RV Accessibility:  RV park can accommodate any size; however the loop around Lake Tahoe has narrow roads. Large trucks were coming through so I imagine larger RVs could pass through as well, however there is no parking at the pull-offs or park areas for recreational vehicles.

Cell Phone Signal Strength:  Spotty and no service at all as I went through the North East area of Nevada on then loop

Cost:  $32 per night at RV park with the Passport America membership. $0 for the scenic route

Zero Gravity Reclining Camping Chair – Two things I love about this chair – the small side table for a drink and food and the canopy to keep the sun out of your eyes.