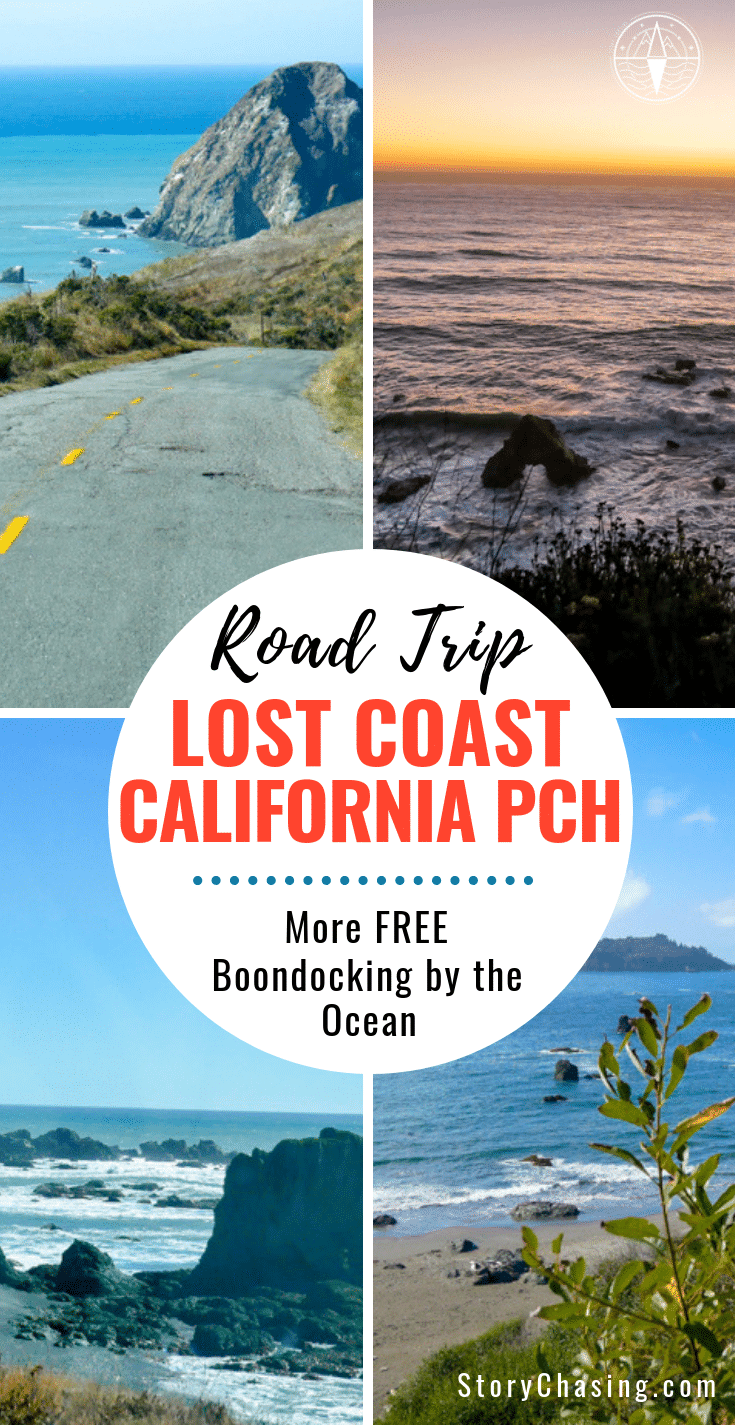 Traveling on the Lost Coast Trail in California was one of the most challenging roads I've ever driven since starting my RV journey – even more challenging than the Lake Tahoe Loop without guardrails in a 26 foot RV.

This trip all started in Crescent City, California just after you pass over the Oregon and California border on Highway 101.

It's one of my favorite places to travel with a plethora of boondocking spots right near the ocean.

Crescent City wasn't one of my favorite places to hang out, though the coastline is pretty with some beautiful scenery.

I just wasn't thoroughly impressed with the city. Maybe it's because I was expecting more from the first city you see when entering California. 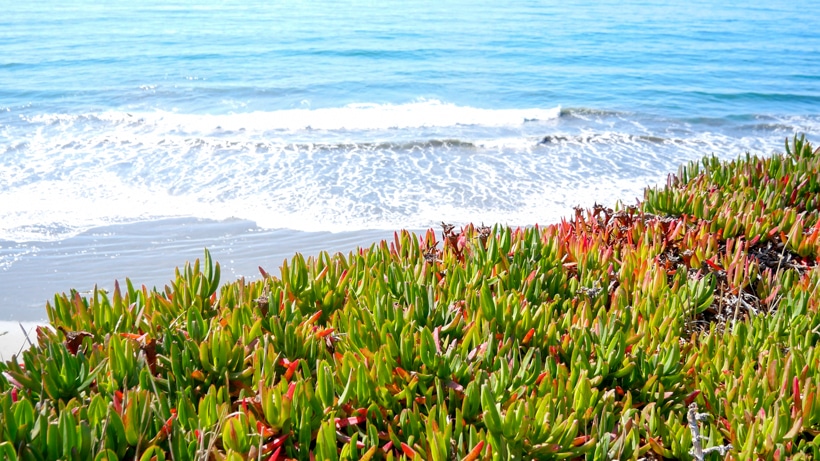 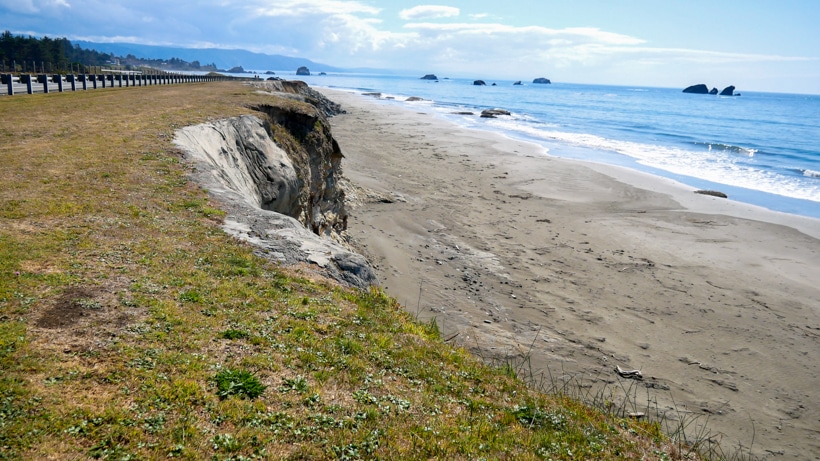 It was pretty run down in the areas I saw and I didn't see a place just in town to overnight, so I stayed at a free casino just north of Crescent City for a couple of days before making the trek south, but not before capturing some beautiful scenery around Point Saint George.

I was hoping to find an overnight spot by the ocean before getting to Eureka, California, but no such luck.

I stopped in Trinidad at a place that was on one of my apps, but it was a bit sketchy and very tiny place with too many other people around, so I skipped it and kept going.

The view was pretty incredible though from Moonstone Bay which is popular for surfers. 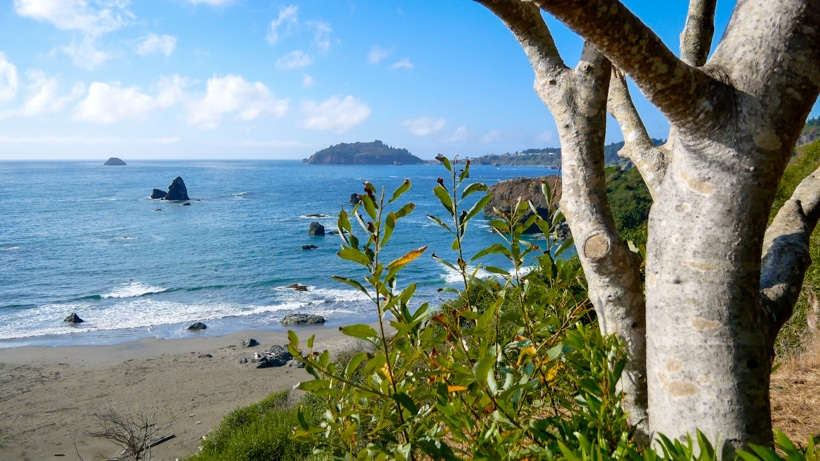 Lily and I stopped at Trees of Mystery to visit the massive statue of Paul Bunyon and Babe, so Lily could get her picture taken with all his furry friends.

Then off we went again where we landed in McKinleyville for three days to work before going to the Lost Coast. I figured I wouldn't have a cell signal there in the Lost Coast and wasn't sure how long I might be on the trail.

Sheriff Knocks on My Door

I ended up just on the outskirts of this neighborhood where I could park for free, and that's where I stayed for three days.

I would walk around the coastal trails for exercise and then get back to work and keep repeating.

On the third day I was there, I was just waking up when there was a knock on my door.

It was the sheriff.

Apparently one of the neighbors had called to report a suspicious van in the neighborhood. I usually wouldn't stay in neighborhoods that long but it was right on the cusp of the community and next to a parking area for people wanting to walk the coastal trail. So I figured it was ok.

Anyway, he was very friendly and chatted with me about what I was doing in the area and how long I intended to stay. He also told me that in that area it was okay to stay for ten days without moving and that in all of California, it's not illegal to live in your vehicle.

I let him that I was actually leaving that morning and was just getting up, but he invited me to stay longer. I got a bit of a kick out of the whole thing because it was my first time somebody turning me into the cops and the cops were super chill about it.

The Lost Coast trail starts in Ferndale, California and travels along Mattole Road, winding, twisting, turning, through forest, pastures, along with the coastline, and back to Highway 101.

The two-lane road was one of the worst roads I've ever driven on with potholes and severe rough terrain.

Lost Coast gets its name from being the coastline in California that isn't explored frequently from travelers due to its rough, rugged, and steep terrain where major roads have yet to conquer. It's one of the reasons Highway 101 cuts inland and by-passes this area altogether.

I should have known how bad it was going to be just by the name, but I didn't expect the 2-lane road to be so rough throughout. What You'll Find on the Lost Coast Trail

The Lost Coast is indeed a spectacular place despite the rough ride in and out. It's an experience like no other and one you won't forget for a long time.

Would I do this drive again?

If I had a Jeep, I would travel it again, and the experience might be much different. It took me over four hours to drive the 67 miles due to how bad the roads were, and the steep inclines and declines and extreme switchback turns. 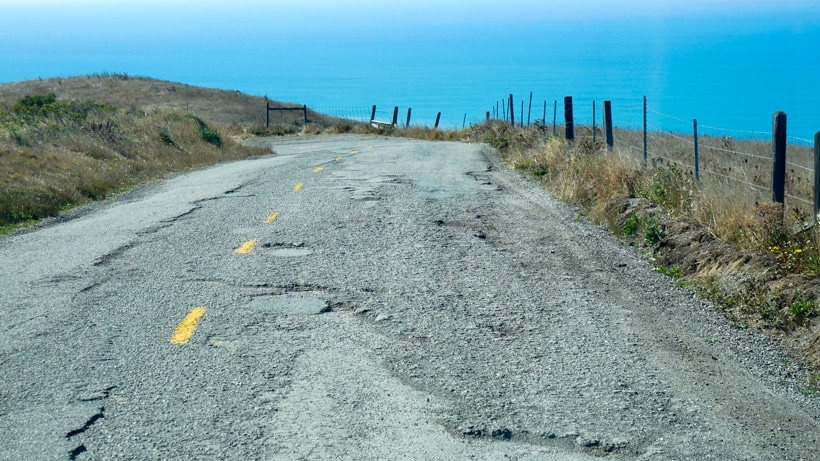 There's no cell service out there and very few people you see on the road – so if you pop a tire be prepared to wait for help or change it yourself if you have a spare.

I, of course, was thinking of how I decided to get rid of my spare tire because it's such a pain to open up the back doors with it on the hitch. Then so many people gave me a hard time doing that.

All I could think was, “Please don't let this be the moment where I get a flat without being able to call for help!”

That would have been highly unfortunate.

Thankfully nothing like that happened, and I got through it, but the whole event rattled me a bit. Most of my nervousness was due to dodging potholes 95% of the time I was on the road, the steep declines where I was in second gear and still having to apply the brake the entire way down and not being able to let up because the aging road was twisting and turning all the way down. I just kept hoping that the brakes would burn up.

I also saw cows grazing along the hillside and we had this moment of me looking at him and him looking at me. I think we locked eyes and pretty sure he was wondering what I was doing there on this crazy ride. 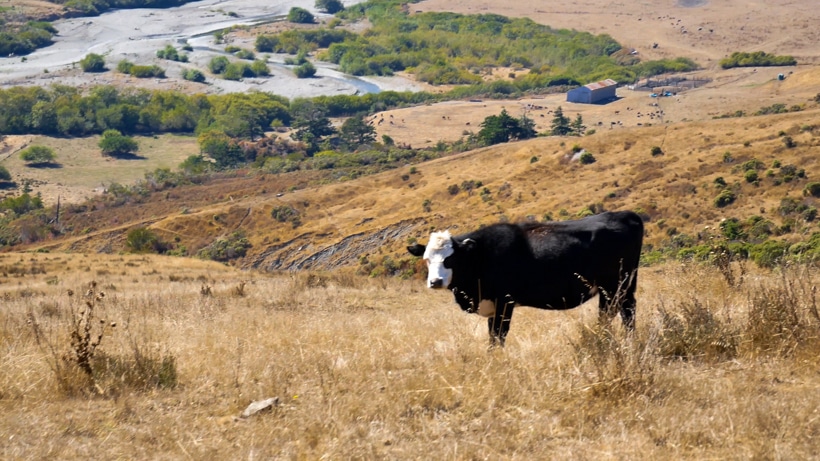 At the very top of the peak, at about 1,250 feet in elevation, you could see the expanse of the hills, cliffs, and then the beautiful ocean. It was rather cold up there as well, especially with the wind. 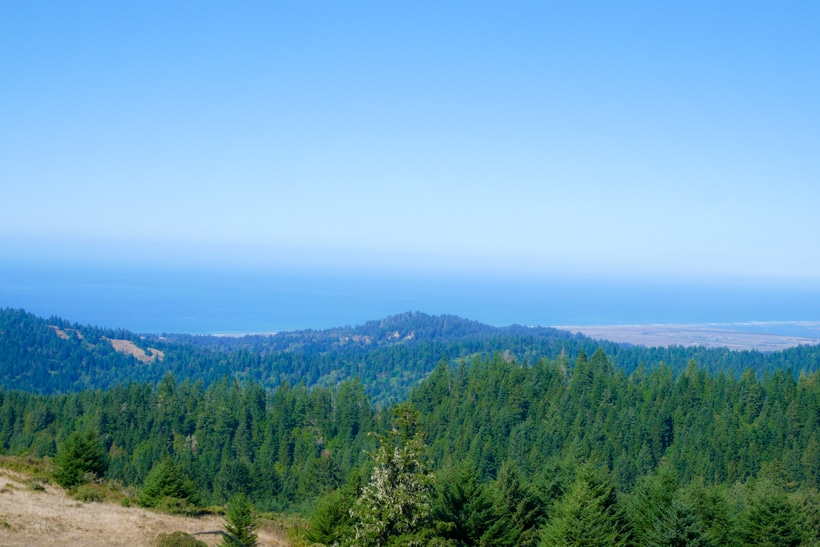 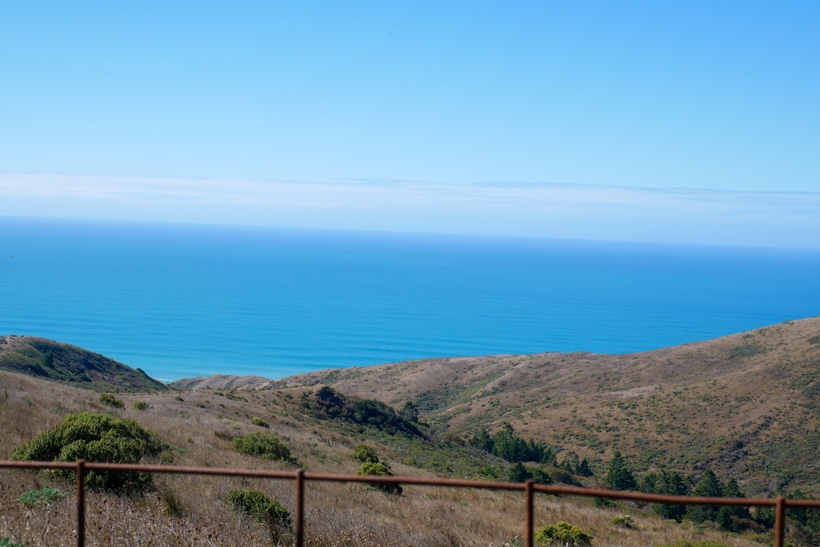 Once I arrived on the actual Lost Coast overlooking the ocean and the craggy rocks below, it was breathtaking and felt so amazing to sit and take in the beauty and nature around. The wind was pretty fierce that day and, if you saw my video, my hair was a hot mess! 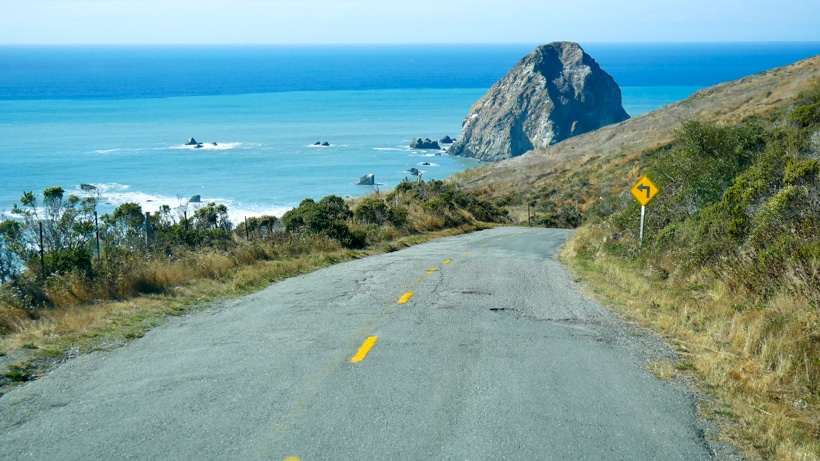 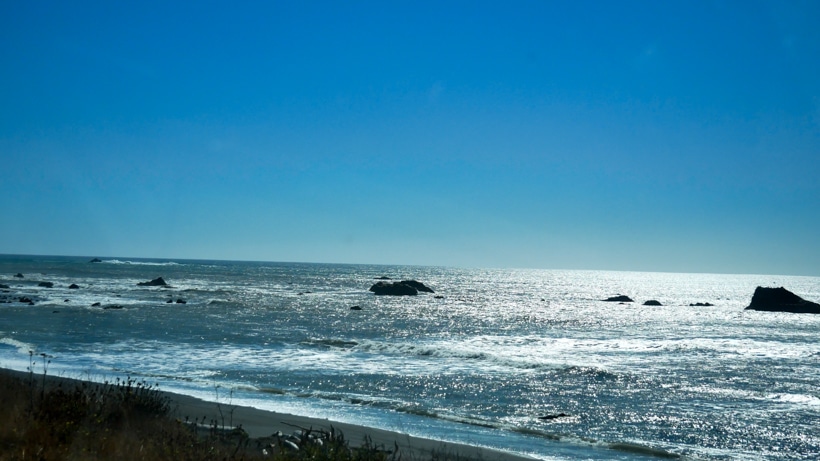 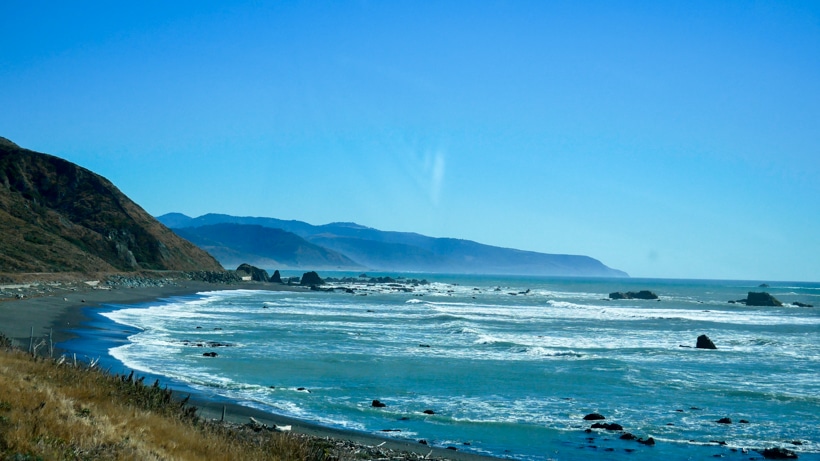 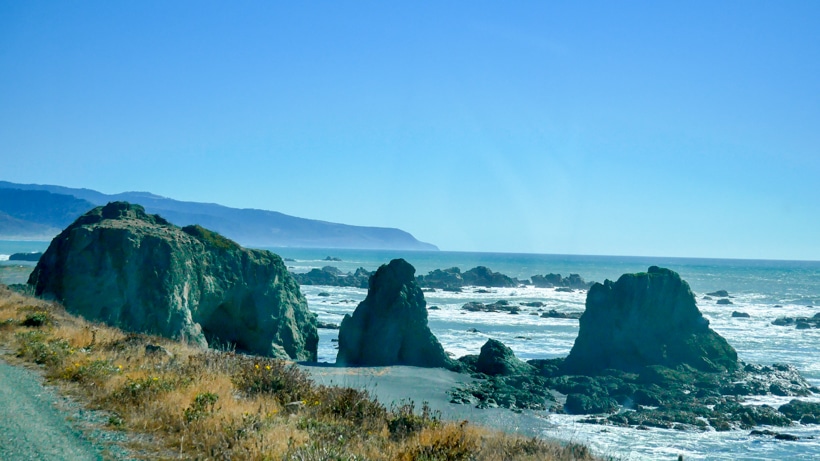 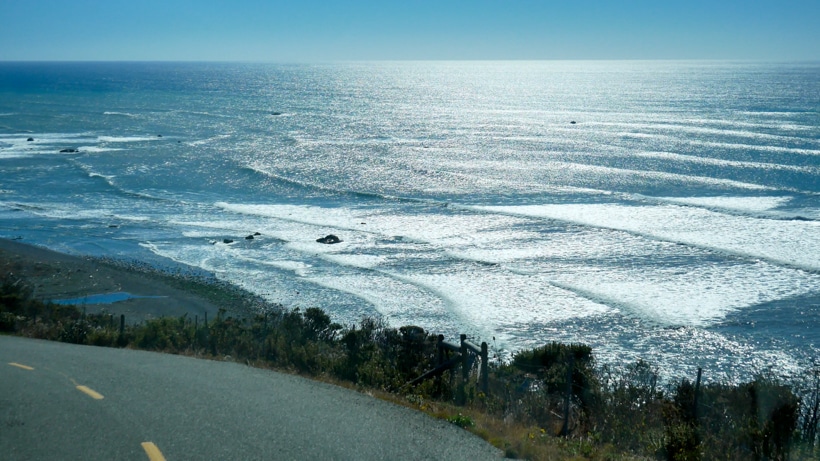 There was even a bridge with wooden planks laid out to cross the bridge – which of course frightened me especially after my nerves were already shot from the crazy drive from before with the van rattling all over the place, dodging potholes and rough roads. 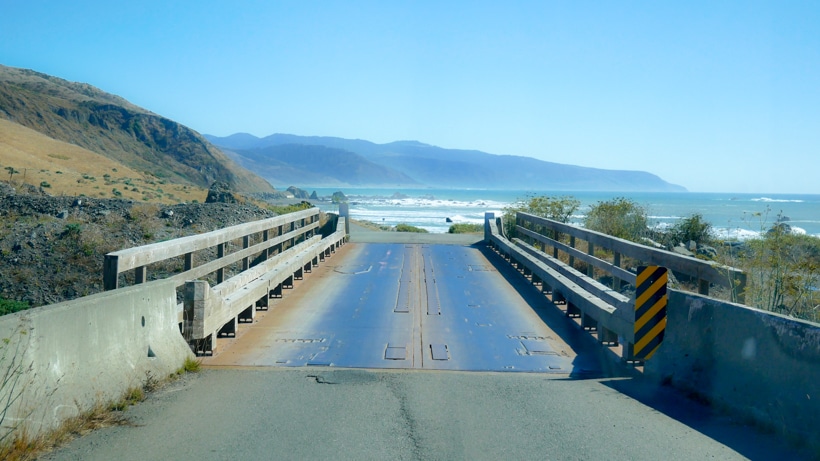 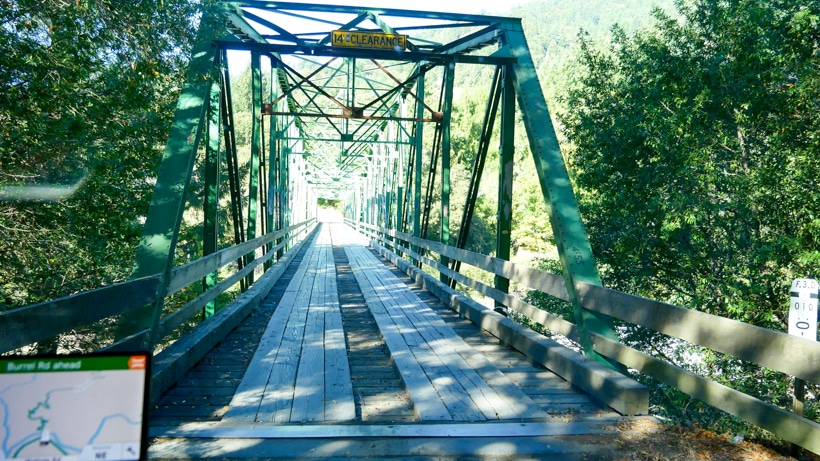 The Surprise at the End

After driving for four hours, I was rewarded at the end with this breathtaking drive through a redwoods forest where the trees loomed high over the street, and it suddenly seemed like it dusk at night in the forest.

I was so glad to see the Redwoods – not only for the gorgeous view, but I knew Highway 101 was near.

My GPS had stopped working because it couldn't get a signal and the cell phone didn't work either so a majority of the time I had no idea how much further I had before civilization again. It was like being in part of the country that was untouched, without mansions hovering along the coastline. There's not shops, no restaurants, no grocery, or gas. It's just you, the rough road, and nature.

I'm so glad I had the SumoSprings bumpstops installed prior to this drive. The SumoSprings helped to prevent the sway when tackling these tight turns and corners – I didn't feel like I was tilting to one side during the turn anymore.

Searching for a Boondocking Spot

After that long day of driving and my shoulders and back hurting from the constant active driving, I wanted nothing more to rest and stop driving. However, I had a difficult time finding a place to boondock in the area I was in so I decided to push forward another hour and 40 minutes, down Highway 101, turn west onto Highway 1, go through another Redwoods forest for 40 minutes, and then hit the coastline again.

So that's what I did.

All I wanted was to see the sunset that night over the ocean, wake up the next morning to the ocean, and just relax. No driving for a couple of days at least.

Finally, just before sunset, I arrived on the Pacific Coast of Highway 1 and was met with a glorious sunset and almost immediately found a great boondocking spot with cell coverage.

Oh, what I sight to see!

I couldn't believe when the ocean started to appear, and I was getting closer and closer. My heart was beating a little faster, and I was thrilled in anticipation of being able to rest next to the ocean for the night.

My happy place! It was a perfect end to a crazy day.

Have you traveled the Lost Coast Trail? What's the worst road you've ever traveled and would never do again? 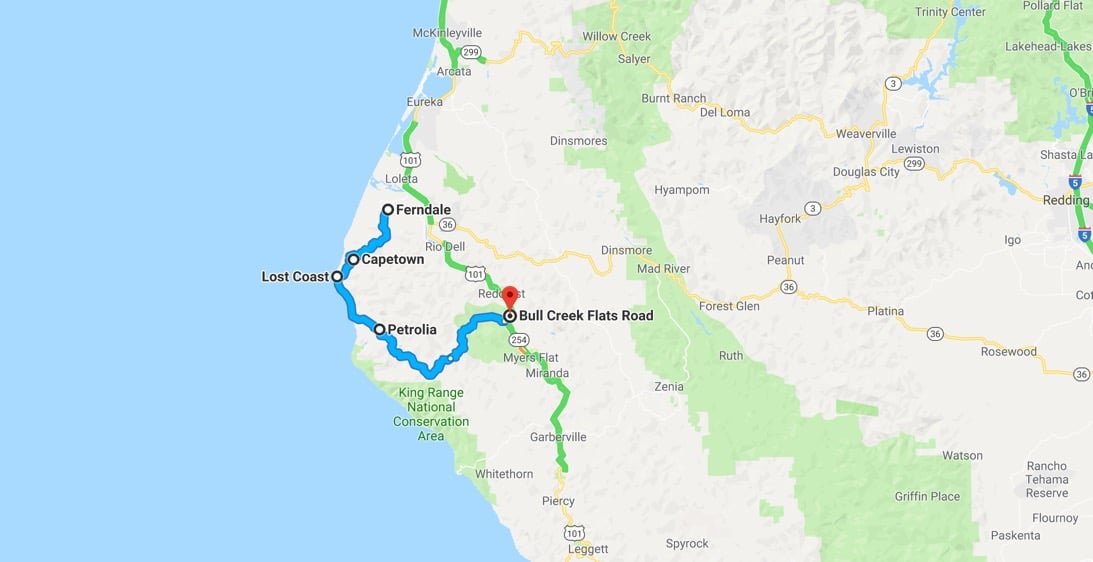 Road Conditions: Roads aggressively rough, filled with potholes, bumps. I had to constantly go into the other lane to avoid.

Weather Conditions: A bit chilly at the highest elevation of 1,250 feet, but otherwise warm, but windy.

Cell Phone Signal Strength:  Cell signal was very sporadic throughout and I had no signal on the Lost Coast nor going through the Redwoods. Verizon was stronger than AT&T and you'll definitely need a cell booster, like the weBoost that I use, to get a better signal if you'll be working or watching movies.

SumoSpring Bumpstops: Bumpstops for the rear of the Hymer to get that one-inch lift and to reduce sway.