We're off on an epic adventure today on the North Shore Scenic Drive out of the National Geographic 300 Scenic Higways and Byways. This is #8 of my quest to visit all 300 drives, that has landed me here in Duluth, Minnesota, the starting point for the drive.

Lily and I got an early start and headed out from our infamous Walmart parking. Hey it's free and when you're working all week in the RV, sometimes free and easy is what's needed. Plus they have free wifi when I'm in a pinch – like Verizon throttling my unlimited wifi. Yes, that's a whole other story to come later.

The North Shore Scenic drive starts in Duluth, Minnesota and ends at the Canadian border hugging the west side of Lake Superior and is about 154 miles depending on your starting point in Duluth, Minnesota. Before heading out, I had checked out the route, via Google Maps satelitte view, and scoped out the area for cute little shops, restaurants, and things to do along the way.

This morning I opted out of my usual coffee with my Aeropress and decided to visit a seriously cute shop just outside of Duluth called Mocha Moose Coffee Cafe in Two Harbors, Minnesota.

It took me some diversions to get there as they had their annual marathon along the beginning part of the scenic route on Minnesota 61. I had looked the night before to see if there was anything going on, i.e. construction, etc before leaving, but somehow I missed this HUGE marathon!

Anyways, so now that we're on the old Minnesota 61. Ok wait. I need to explain that there are two 61s.

The old meandering 61 and the new four lane 61.

The two eventually meet up, but start off on the the meandering Minnesota 61. That's the one that was blocked off for miles until I found a place I could finally hop on to it.

Thankfully it was just a mile south of Mocha Moose because I was seriously craving some coffee by this time.

I'm so glad I stopped here at Mocha Moose for a plain ole latte made with steamed coconut milk. Micki, one of the cafe owners, didn't miss a beat. Seriously one of the best lattes I've ever had. No sugar needed either. Smooth and rich and the coconut milk has its own natural sweetness. 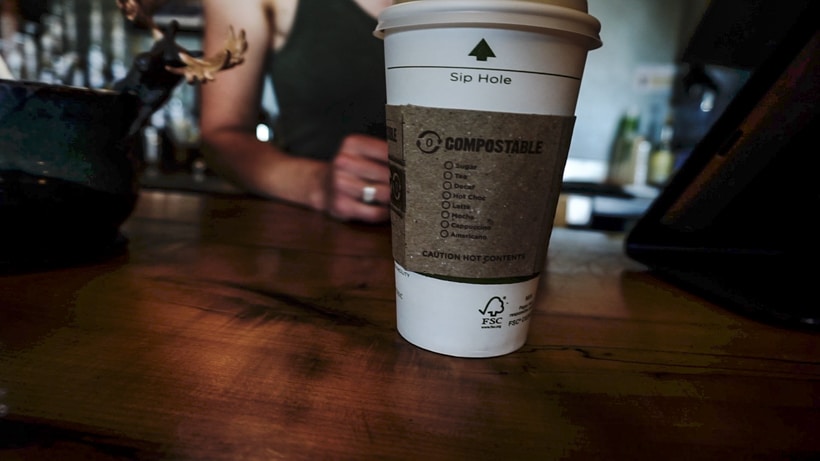 Micki was such a delight and a breath of fresh air. Her and her mom purchased the coffee shop together, 5 years ago, after both of them quitting their jobs to pursue their dream and travel in the off seasons.

One of the coolest things about this eccentric cafe – they use organic incredients and even have vegan cookies! Micki gave me one of the chocolate vegan cookies that was out of this world amazing. Again, not a ton of sugar and so so yummy!

If you're on this drive, please stop by. It's one of the only coffee shops for miles and miles and delivers the wow factor.

Next we headed up the road to Breakwater & Lighthouse and enjoyed the cool breeze coming off the water and witnessed the calm, stillness of the water with a slight tinge of fog in the distance. 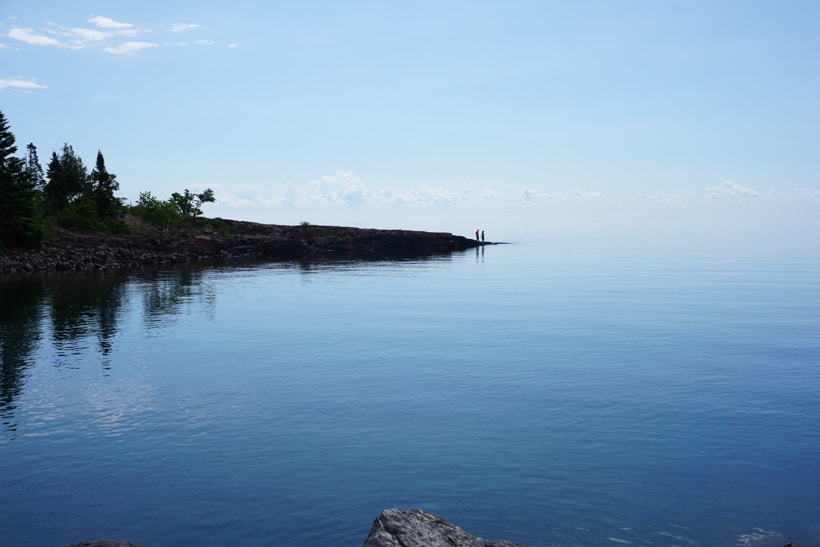 You could see the reflection of the clouds off of the water – that's how still it was. 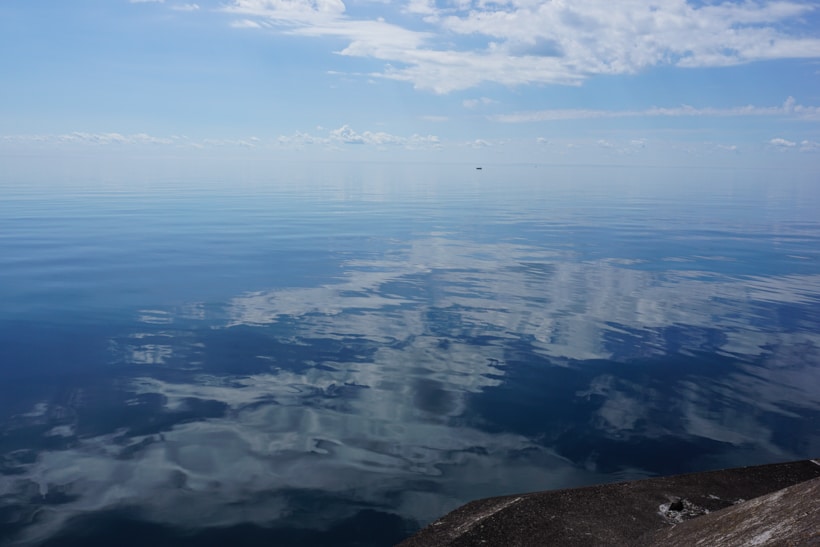 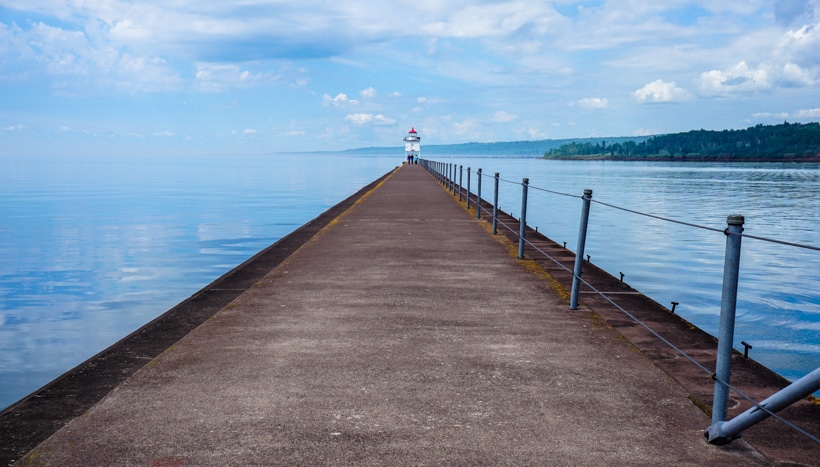 The breakwater, built by the Army of Corp of Engineers, led you all the way out to the lighthouse at the very end. Given how calm the water was, it was a nice walk on a beautiful day and there were picnic tables dotted throughout the park to relax and enjoy the view. 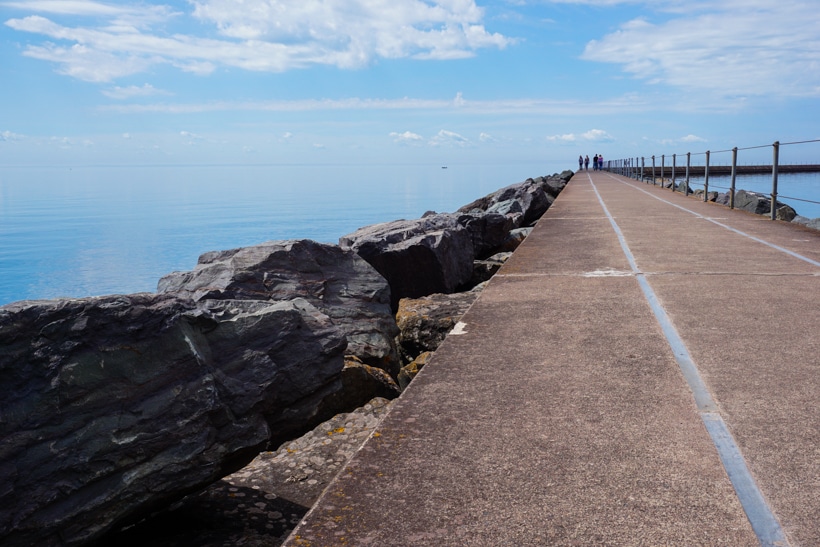 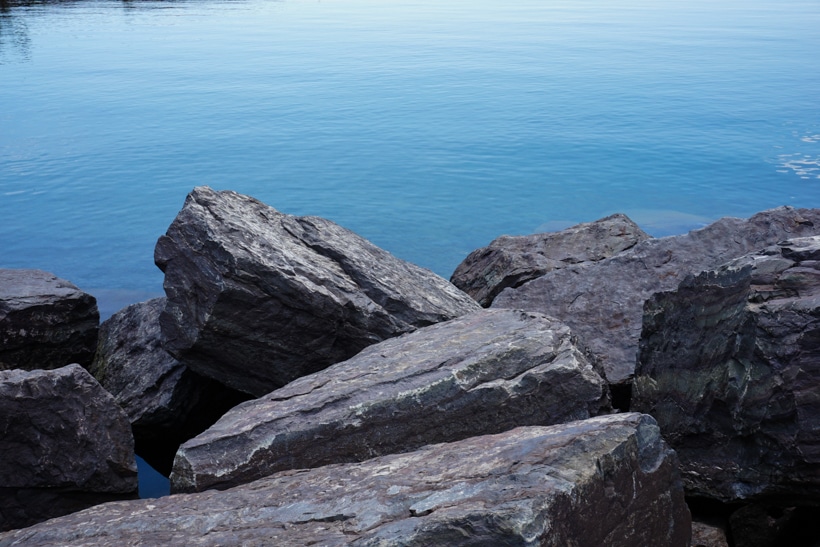 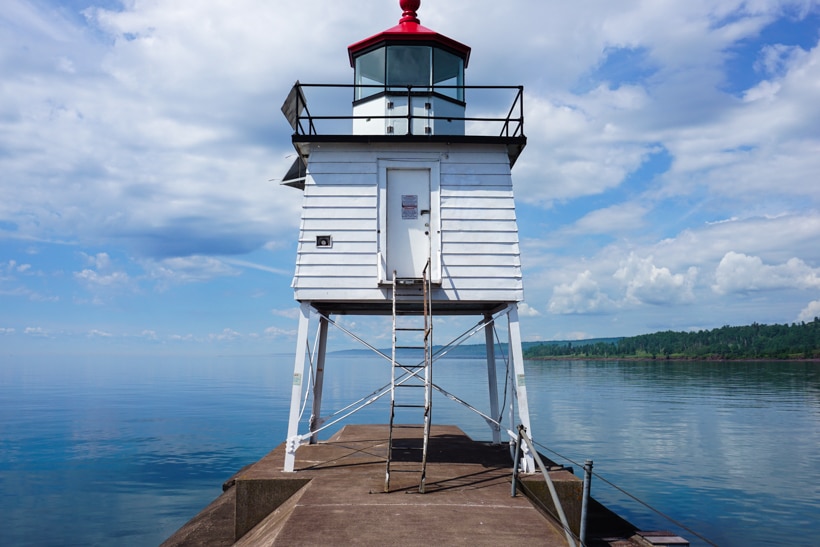 As we traveled further north we came across another lighthouse called Split Rock Lighthouse. There is a $10 admission fee, but well worth the history lesson and view.

I got there just in time for the guided tour to start and Jen, our tour guide, gave us quite the history lesson about the lighthouse, its keepers and the heroics of one man to save his crew from a drowning ship.

Watch my video for Jen's story on his heroics. 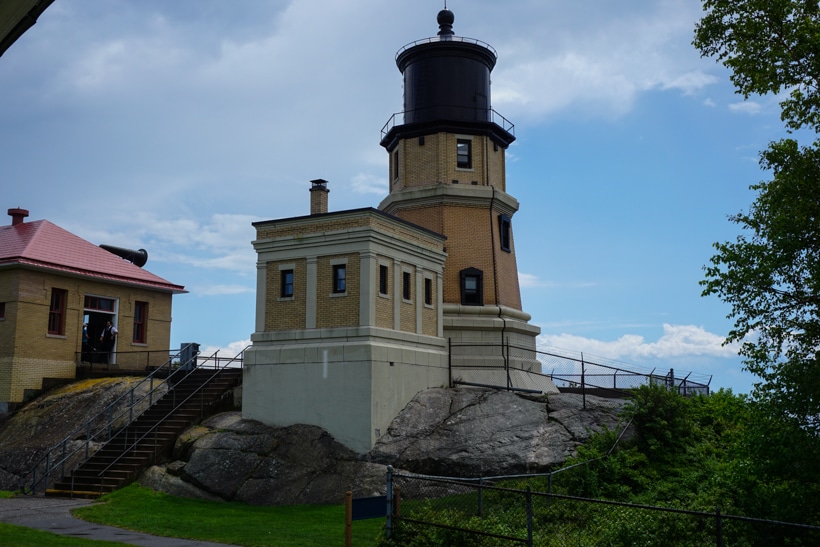 I started to climb the steel stairs that circled up towards the light in the lighthouse, but was overcome with anxiety. Something about being able to see through things as I climb higher grips me with fear for some reason.

I have no idea why and can't think of an incident that happened to create this fear. I've only ever experienced this on elevators before, so this is the first with stairs. The other couples on the tour helped me through it because I was not going to miss seeing the light in the lighthouse.

The old lighthouse keeper homes had been renovated and there were people dressed for the period to explain the house and the various rooms. 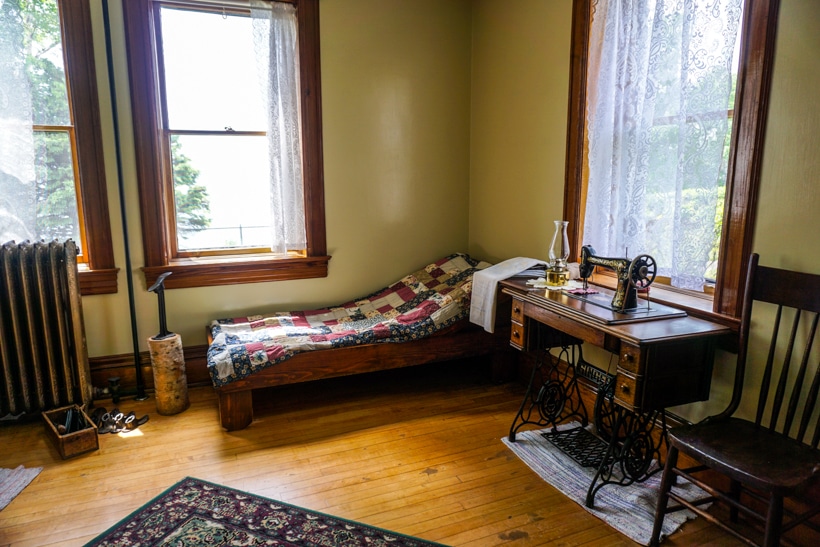 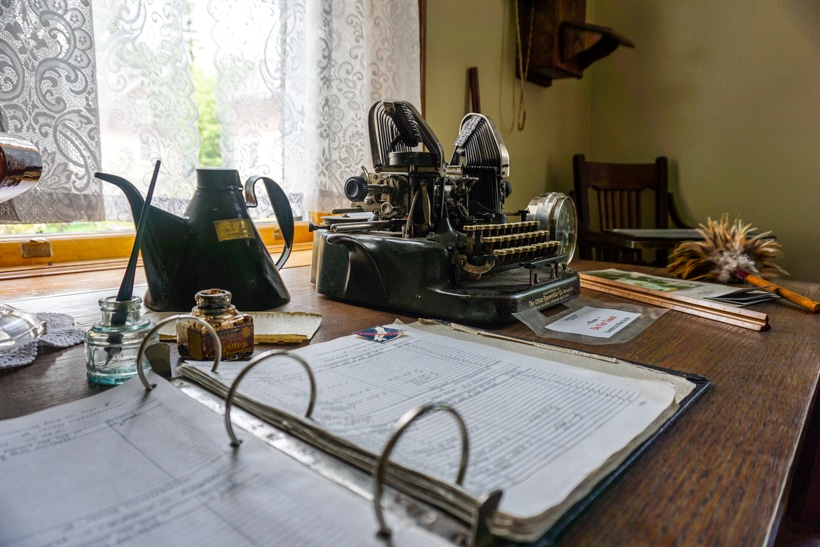 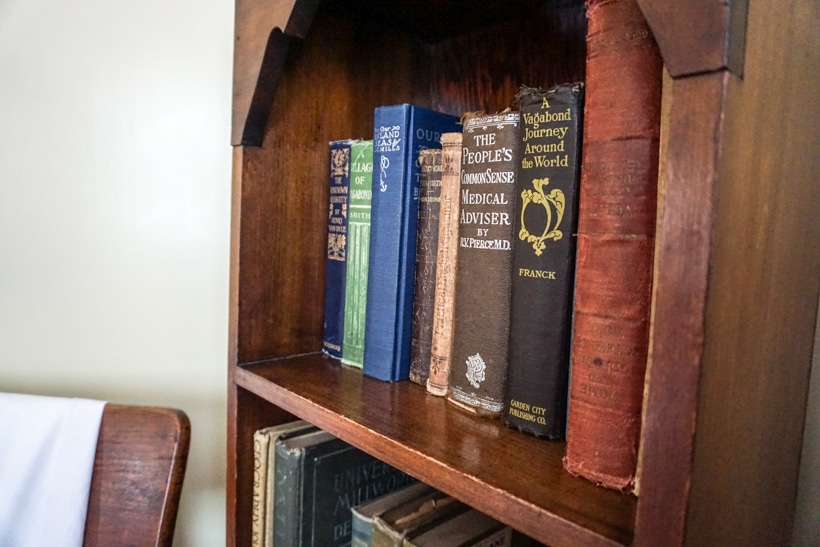 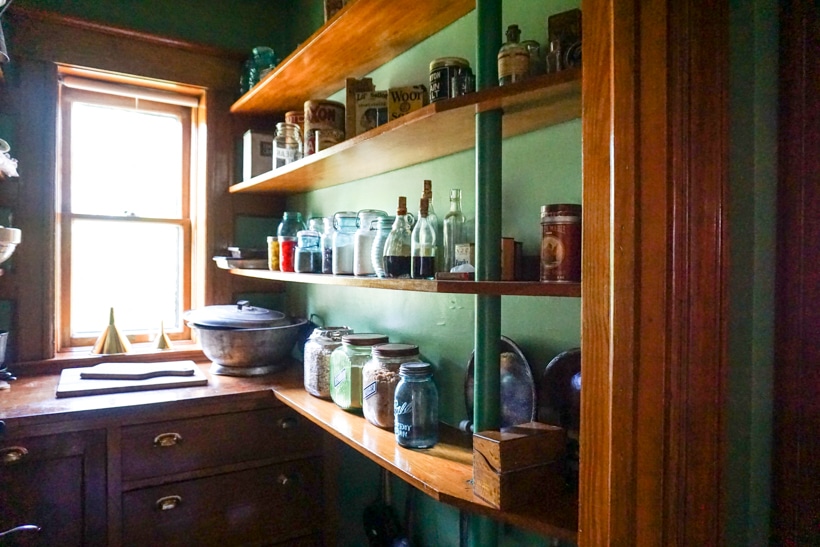 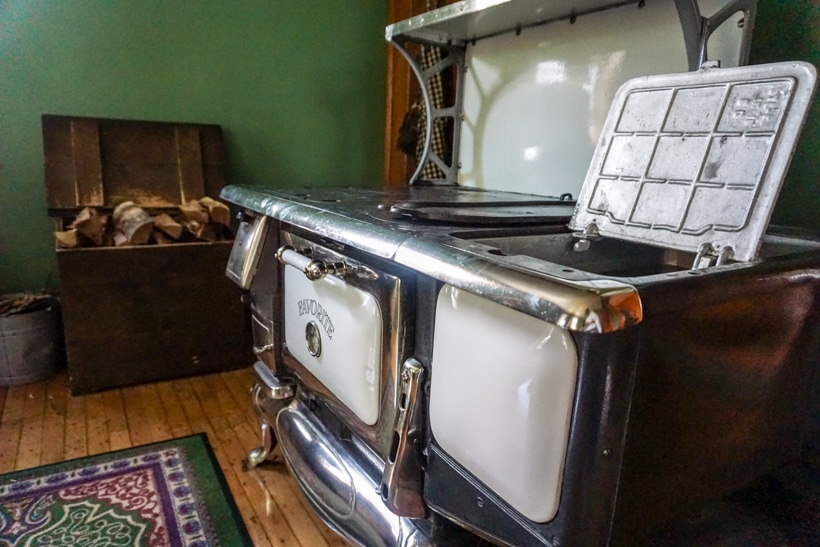 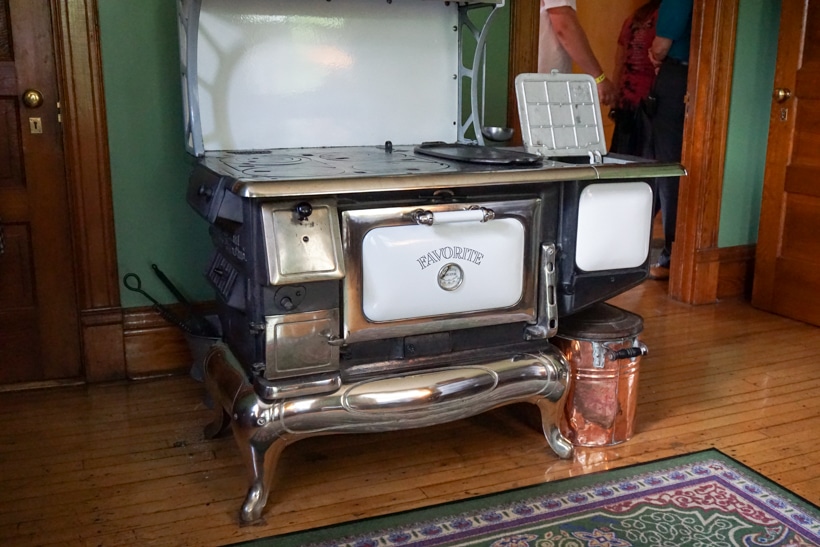 It rained pretty hard while I was on the tour – just enough to make the air humid and muggy! Not such a great feeling, but at least it wasn't 100 degrees outside like in North Dakota.

I kept traveling north along the North Shore Scenic route and discovered little gems along the way where I could pull off and enjoy the view. 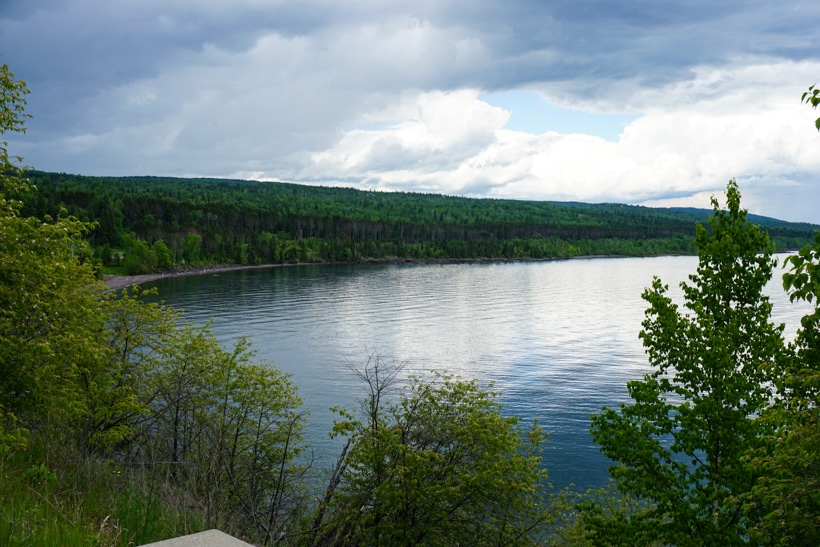 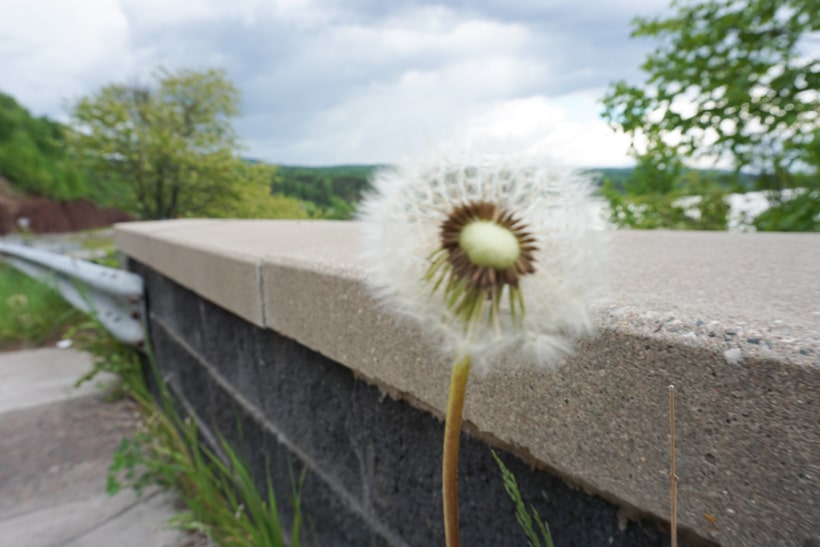 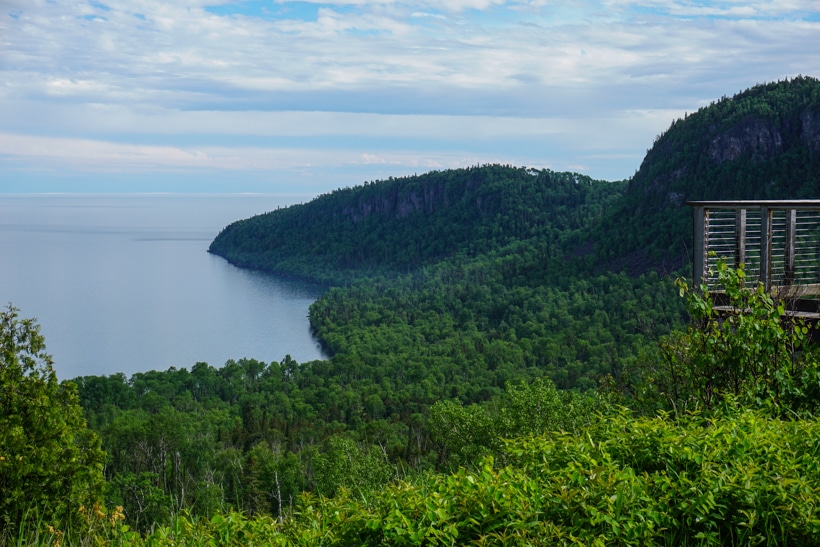 Grand Marais is a cute, little, happening town full of neat shops and restaurants. Micki had recommended a great restaurant called The Angry Trout which I was going to stop for lunch/dinner. However as I arrived, the place was hopping and there wasn't a place to park the RV nearby.

Once I found a place just on the outskirts of the town, I was going to unload the bicycle and ride over. Then it started to rain – and rained hard – so I ended up not eating or venturing off into the town which was a real bummer.

Wasting My Money at a Casino

Instead I kept driving north and ended up at Grand Portage Casino to have a quick little bite of french fries. The place is not vegan friendly so french fries, while not all that great for you, is vegan so that's what I ate. It's certainly not what I was hoping for, like the Angry Trout, but this was a casino after all.

Then I proceeded to lose $20 in gambling on the slot machines. I'm not a gambler and usually steer clear of casinos, because of the cigarette smoke, but I thought I'd just try my hand.

I knew there was a reason I didn't like gambling.

Grand Portage Casino is only 6 miles from the Canadian border so I kept driving through the rain to the border area and then turned around. There's not a loop on this drive so your option is to turn around and go back or keep driving into Canada. I would have preferred the later; however I have to be back in Minneapolis to fly out for work in a week.

So I turned around and headed back.

It was a beautiful drive and I met some really great people along the way. Who says Rving is lonely? It's not! You get to meet people, connect, exchange information, have incredible conversations about traveling, and discover places only the locals know about.

The one downside to this scenic drive is the road conditions.

I'm sure because of the nature of winter, with heavy snow and using salt on the roads, it leads to the conditions that can be quite bumpy along the way. Everything rattled, my curtains fell off, my cushions were in the floor, and I had to slowly open all cabinets to make sure items didn't go tumbling out.

You get used to the bumpiness after awhile and some sections are better than others, just watch for pot holes that tend to be closer into Duluth rather than actually on the scenic road.

This shouldn't stop you from going. My RV was fine and handled the bumps well, even with everything falling in the RV. It's worth the drive for sure.

Cell Phone Signal Strength:  Verizon: 1-2 bars until you're in the Grand Marais and Two Harbors then it's 4 bars. No service at all on the reservation by the casino.