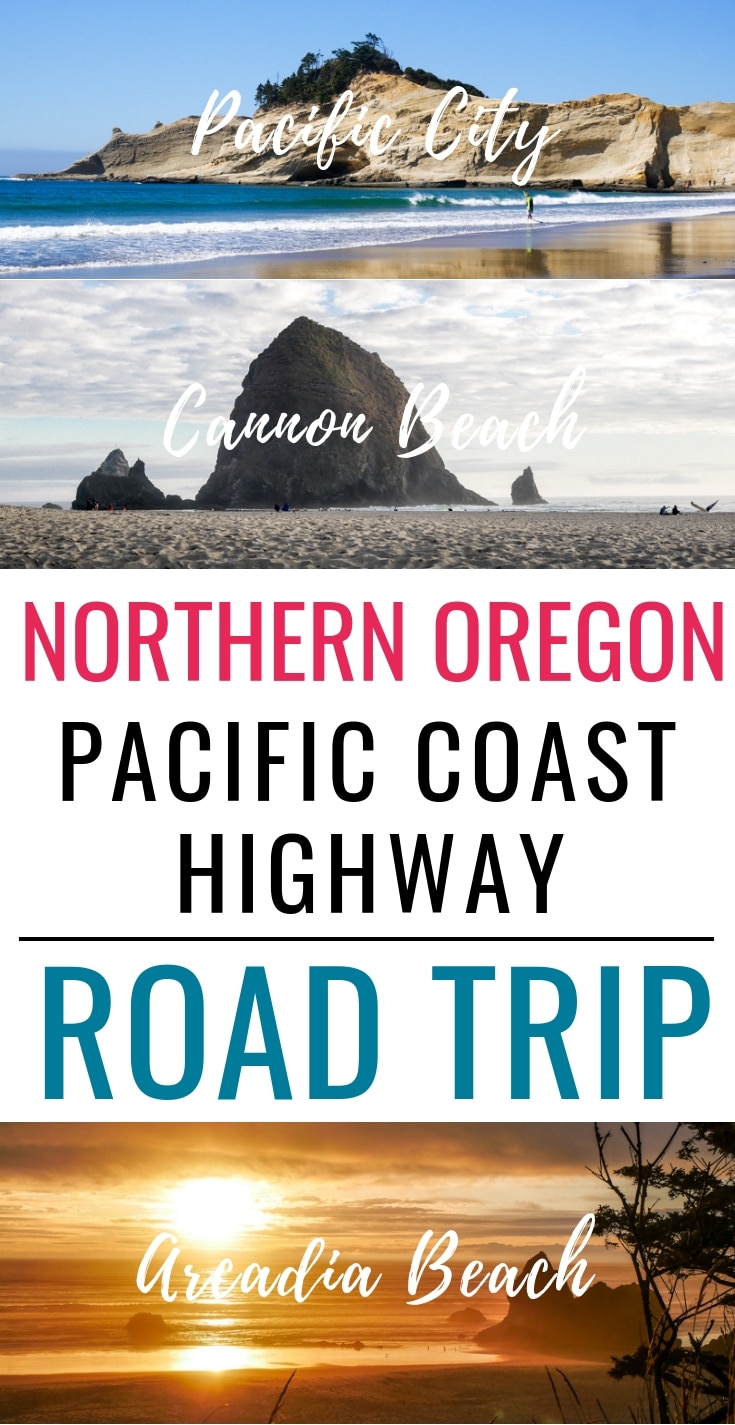 The best way to describe the Northern Oregon Pacific Coast Highway drive is beaches, sand, and haystack rocks everywhere. That may sound weird to say “beaches everywhere” when you're on a coast, but let me explain. Sometimes coastal areas aren't always accessible and have been overrun with tourist attractions, that, in my opinion, take away from the natural beauty of the area. This isn't the case with the Northern Oregon coast. Sure, there are a few tourist spots along the coast, but not many. I love being able to pull off to the side of the road and gaze at the ocean below or hike down to the beach where Lily runs like crazy through the sand. I've enjoyed every minute of my time on this quest drive and had so much fun exploring the towns, the beaches, and meeting people along the way. Related Post/Video All of Oregon Coastline:

Due to rain in the morning, I got a late start leaving Astoria, Oregon – which was Part 1 of this quest drive on the Northern Oregon Pacific Coast Highway. Since I would be filming the coastline, I wanted more sunshine, preferably, to take pictures and document my travels, which is why I waited. So I didn't leave Astoria until about 5:00 pm to start the drive south. I stopped off at the Fort Stevens State Park to empty all the tanks and fill up on fresh water then continued down Highway 101 with the first stop being Seaside, Oregon.

Seaside is right off the Oregon Pacific Coast Highway and just minutes from the beach. It's a fairly populated area with quite a few touristy things like bike rentals, four-wheel cart rentals, the boardwalk along the beach dotted with shops, restaurants, and condos. 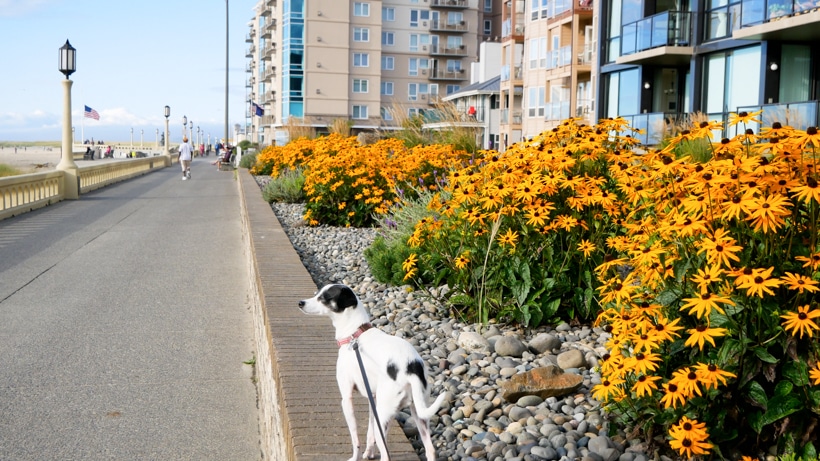 One of the things I love about Oregon is the ability to bring your dog with you on the beach. I haven't seen a beach yet that didn't allow dogs on leash. That's a huge plus in my opinion because though I love the coastal parts of California too, many times you aren't allowed to have dogs on the beaches or even in some parks. When I was in Washington along the coast, you were allowed to bring dogs there as well so huge props to Oregon and Washington for being dog-friendly! 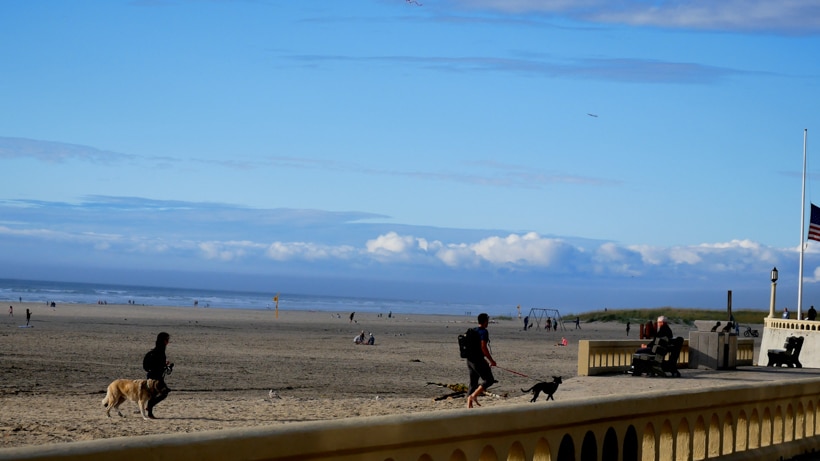 A noticeable difference between Washington and Oregon is the coastal topography is changing quickly. In Washington there are evergreens and trees almost up to the very edge of the cliffs overlooking the beaches; however in Oregon, you do see trees in some areas, but it's the dunes – sometimes covered in tall grass – that make up the topography by the shoreline. 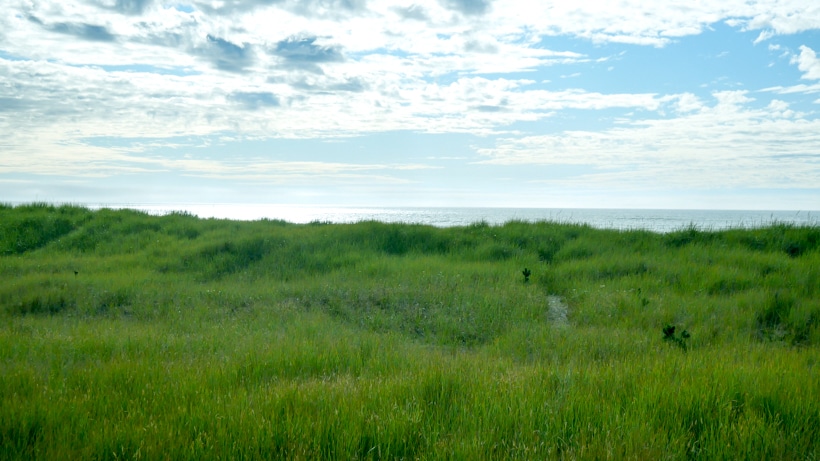 Next stop is Cannon Beach to visit the infamous haystack rocks which were also made famous in the Goonies movie. For those who gave me so much crap about not watching the Goonies before actually filming Astoria – I finally watched it. I can check that off my bucket list now. Haha… After Google Maps sent me down a very narrow residential street that did put me right in front of the main haystack rock, I had to turn around and find the beach to access the haystack rock. There wasn't an access point on that street, but I tell you those people who owned homes right there must have paid a fortune for their houses with that view. It's pretty fantastic. There's RV parking in town as well, and then you can walk over to the beach. I didn't want to take an RV spot since I can fit my Hymer Aktiv into standard parking spaces, so I circled around onto another street and found a great place fairly close the entrance of the beach. The sun was starting to get lower in the sky which made for an incredibly beautiful view of the beach, the ocean, and the haystack rocks. 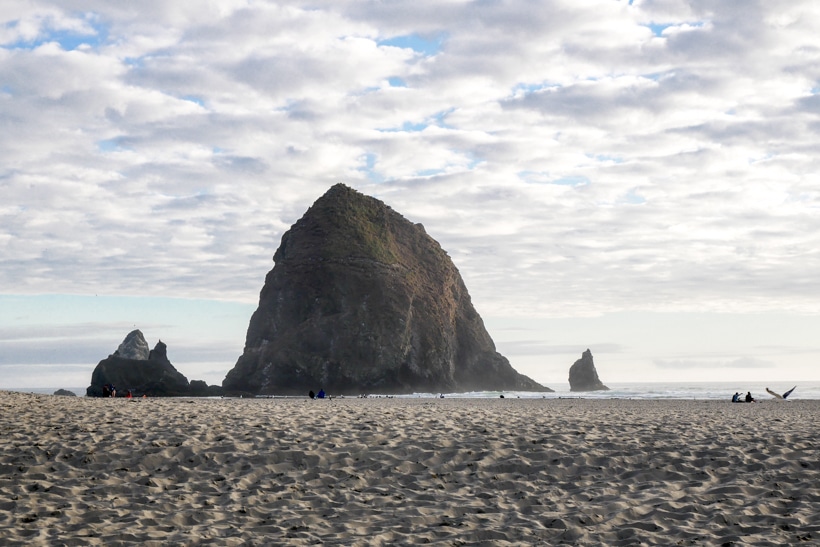 It was pretty windy, so my hair was all over the place as I tried to snap a selfie with the haystack rock in the background. This was the best I could do. 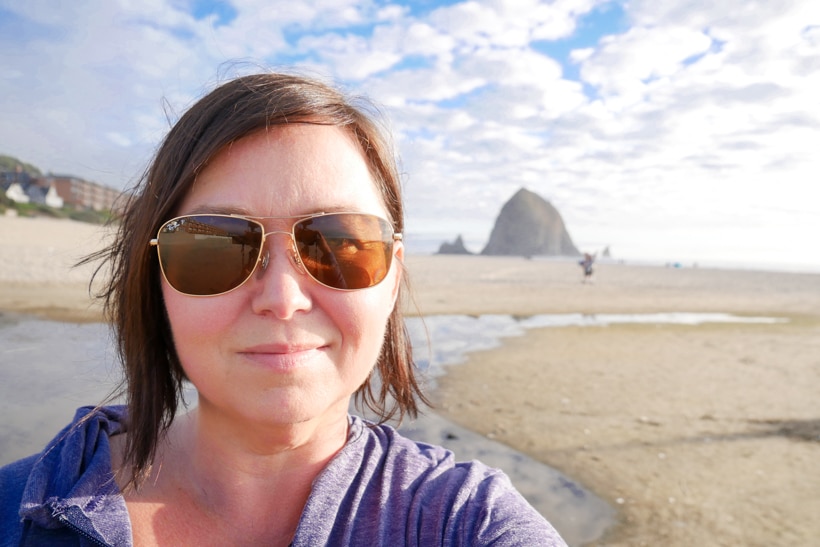 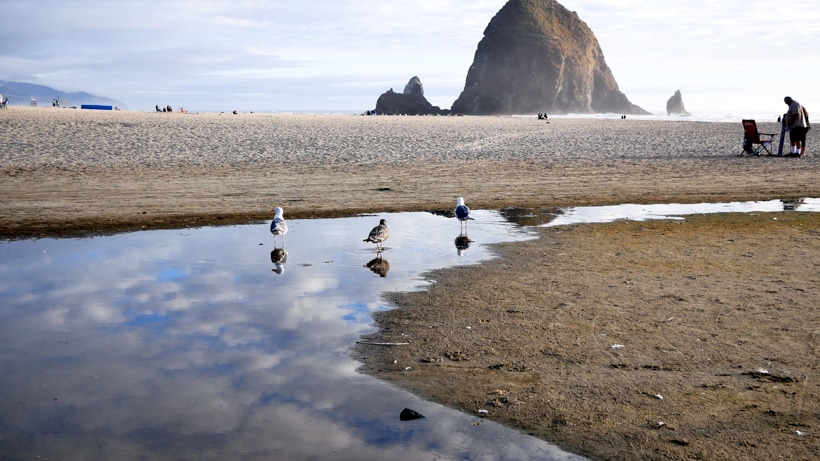 I didn't stay for too long as Lily, and I needed to keep moving so we could find a spot to sleep overnight.

I met up with friends from the Xscapers Convergence who just happened to be on the Oregon Pacific Coast Highway as well. Heather, Nick, and their sweet dog Miles live in a converted school bus, affectionately called Vicaribus that they custom-built on the inside. I might have a van tour with them soon. Hint hint.

We were all headed the same direction, so we ended up hanging out down the Oregon Coast sporadically as our schedules matched up. This is one of the things I love about RVing. You seem to find friends everywhere, and you already have so much in common with RVing that it's easy to make friends along the way. Arcadia Beach is just super incredible with the wood plank stairs down the side of the cliff to the beach, haystack rocks, tons of sand for Lily to run on (you have to watch the video of her running), and another spectacular sunset. 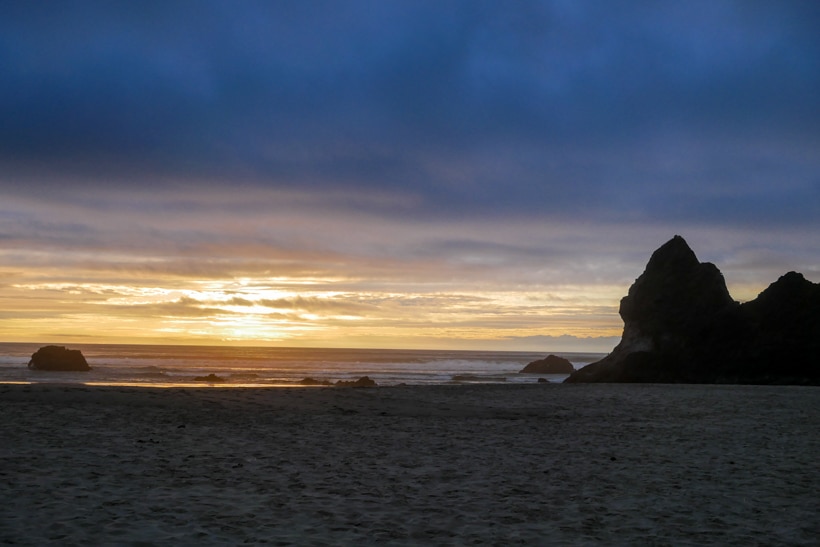 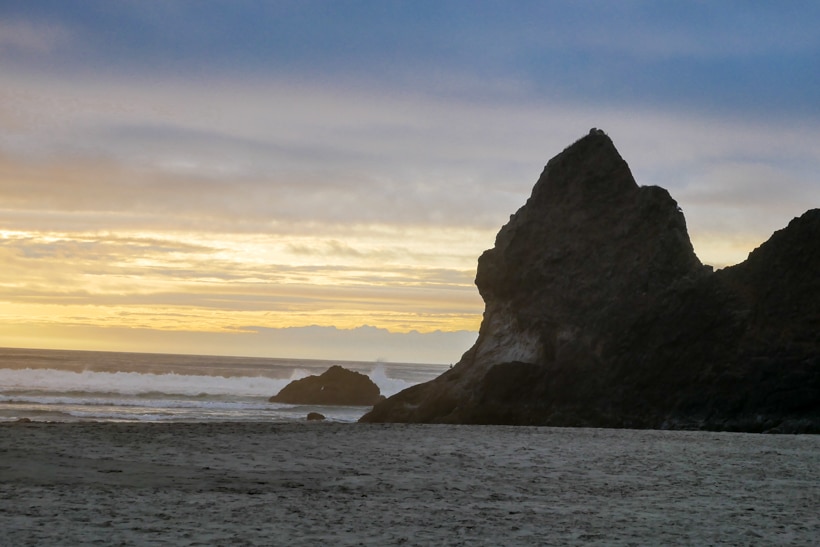 The beach was pretty deserted too. Only the 3 of us and we saw one other couple later. 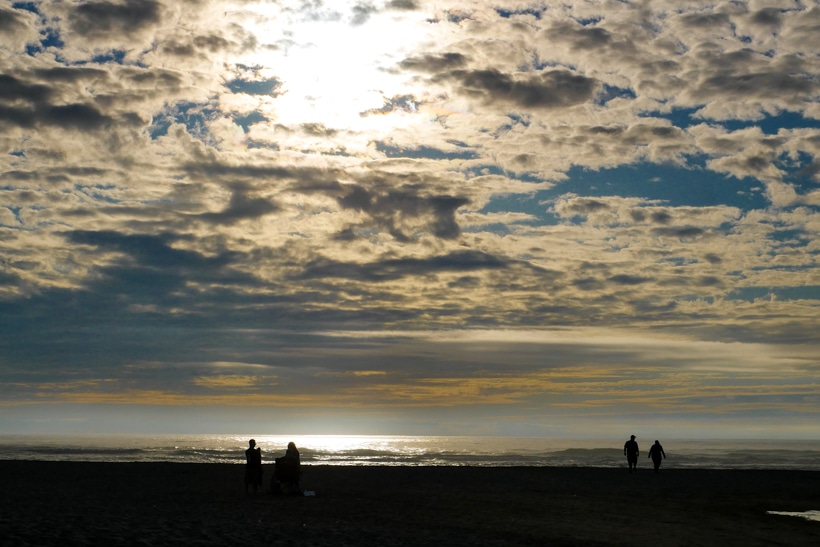 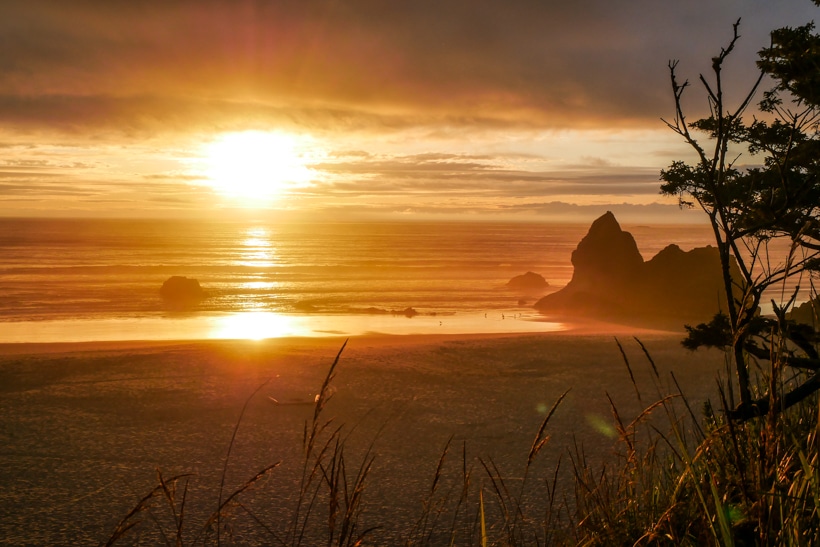 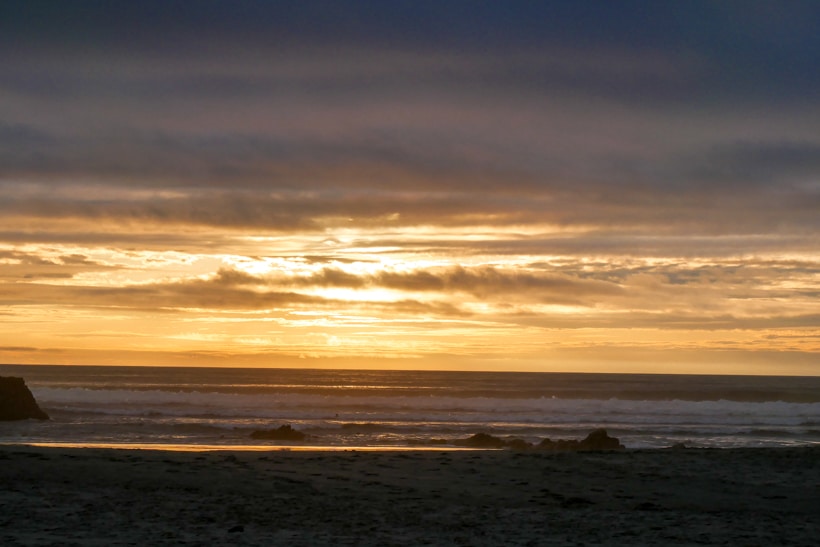 Lily was all over the beach. I had such a great time just watching her run all over the place and enjoy being off leash so she could run everywhere and kick up sand behind her. She makes me smile as I see her have so much joy from this playground of sand. 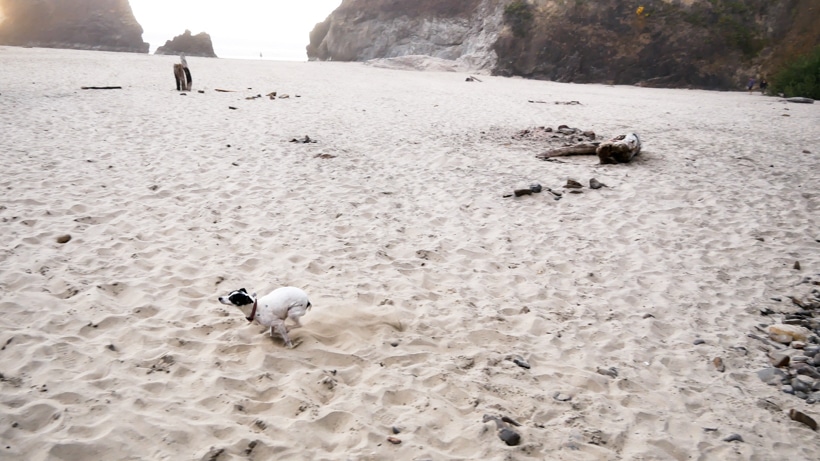 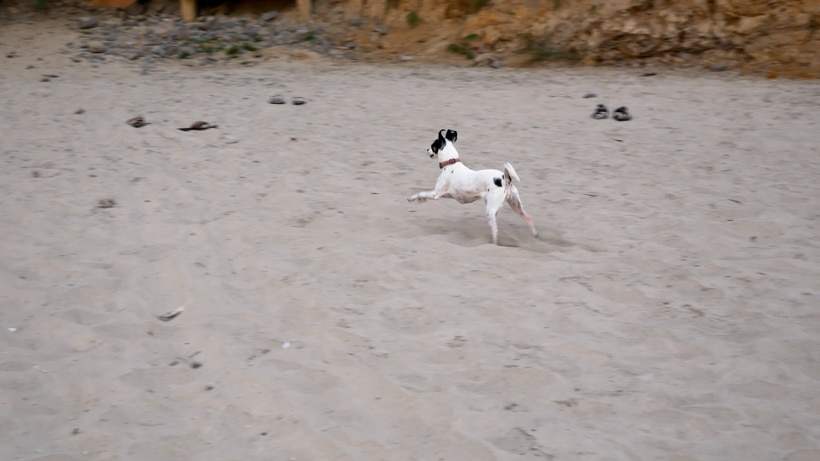 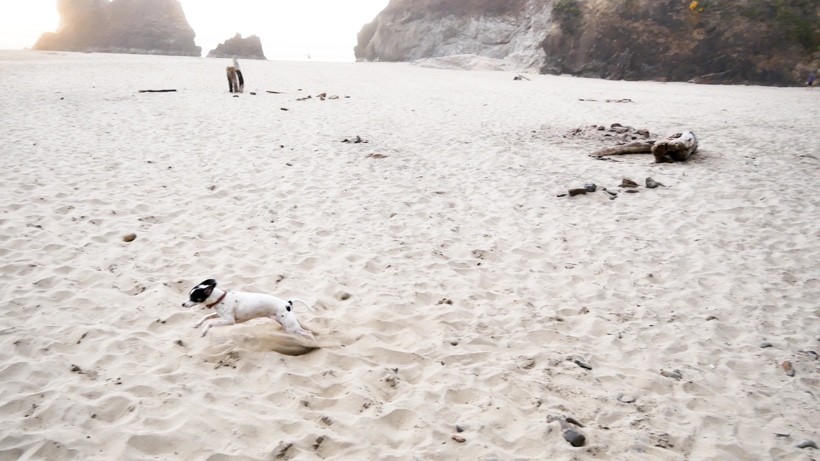 Finding a Place to Overnight

The sun was setting fast, and the marine layer started to roll in pretty quickly so I figured I should start looking for an overlook to spend the night. That was my initial plan, to find an overlook that didn't have a sign stating “no overnight camping.” All through the Manzanita area of the Oregon Coast, there were these overlooks I could have stayed, but I got cold feet because I thought highway patrol would show up and knock on my door. I could have had this view, but no, I chickened out and kept moving. 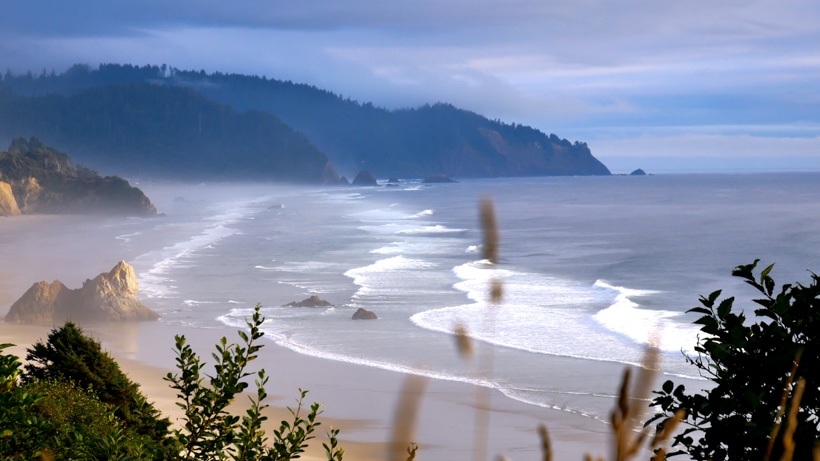 I did find out later from an Oregon State Park ranger that it's okay to stay there and police wouldn't bother us. Now I know for the future! I ended up finding a place a the Blue Herron Cheese Company in Tillamook, Oregon. They are part of Harvest Hosts, but also allow overnights even if you aren't a member of Harvest Hosts. 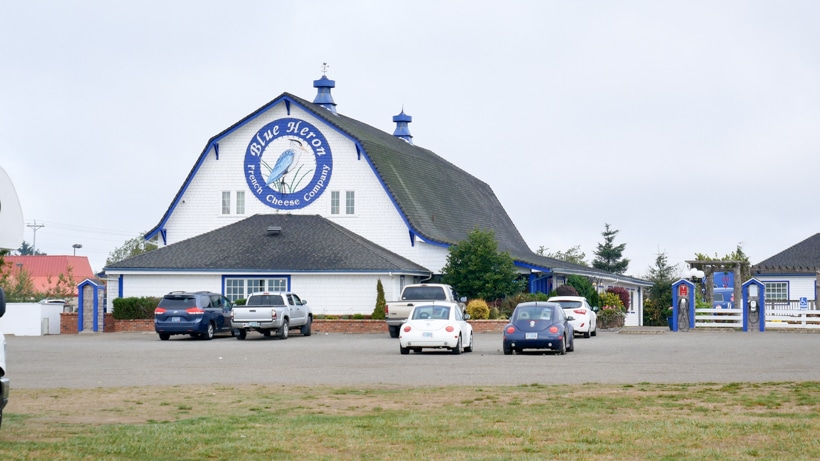 Blue Herron Cheese Company sits on some land off of Highway 101 on a farm with an extensive pasture area for you to park your RV. At one point in time, I think I saw about 15 different rigs and most nights were 2-5 rigs. I ended up staying several nights so I could work and also host my first live stream video on YouTube. It was important for the live stream to have a good Internet connection and this place did. 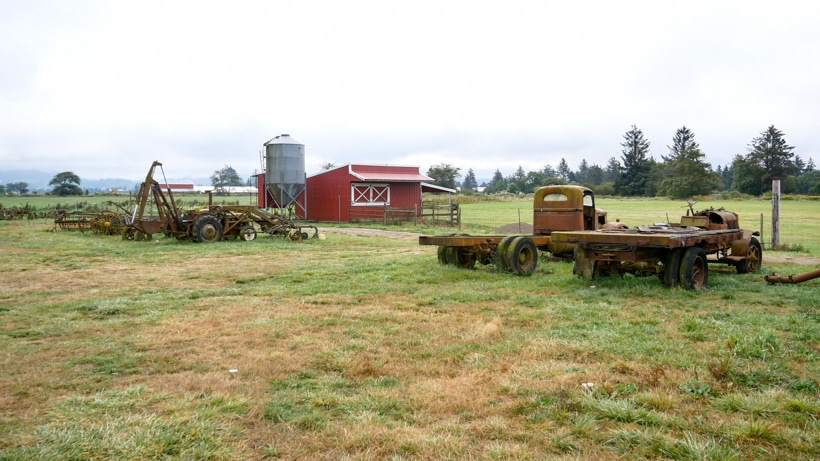 I also ended up purchasing about $50 worth of items in their store and cafe like sparkling wine in a can (never even knew this existed and it was pretty tasty) which is perfect for the van, rosemary sea salt, a few decorations, and a salad from their cafe. It's a neat place with chickens, goats, lamas, and other farm life running around. I recommend this place if you're ever on the Oregon Pacific Coast Highway. It's free too and also nice if you partake of their goodies inside.

After staying several days in Tillamook, Oregon – I headed towards the last stop on the Northern Oregon Pacific Coast Highway, before continuing to the Central Oregon Pacific Coast Highway quest trail. Pacific City is a vibrant little beach town, and let me tell you, the sand was not very compact in many of the areas that they allowed you to drive onto to in order to access the beach. I saw multiple vehicles that were stuck in the sand and airing down their tires to get out, revving their engines to get through that thick layer of sand without stopping so they wouldn't get stuck again, and park rangers digging out sand from around car tires. Lily and I just walked down the path instead. I didn't even want to deal with that mess and take the chance of getting stuck again. We saw more haystacks and a huge dune – more prominent than I've ever seen on the coast – right there on the beach. 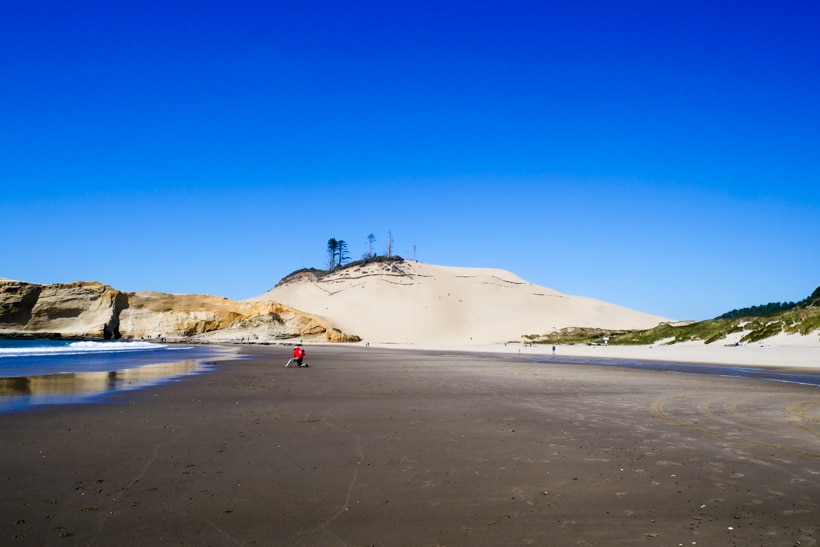 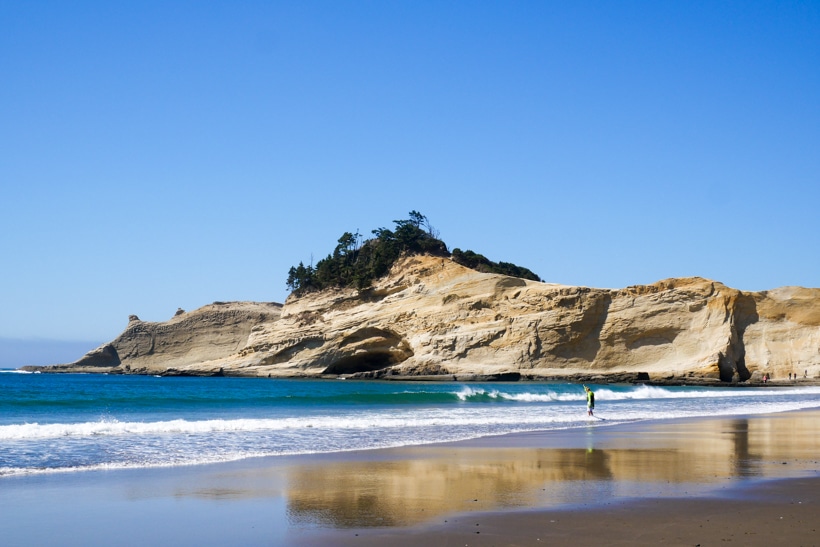 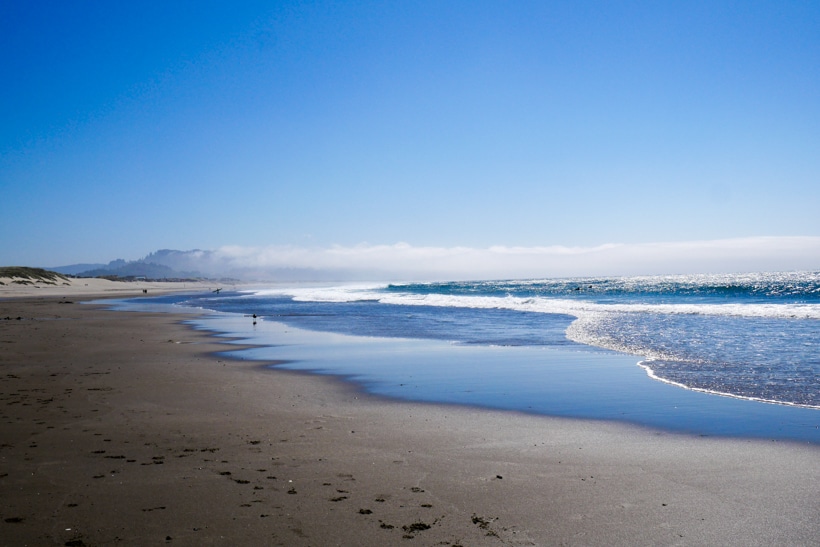 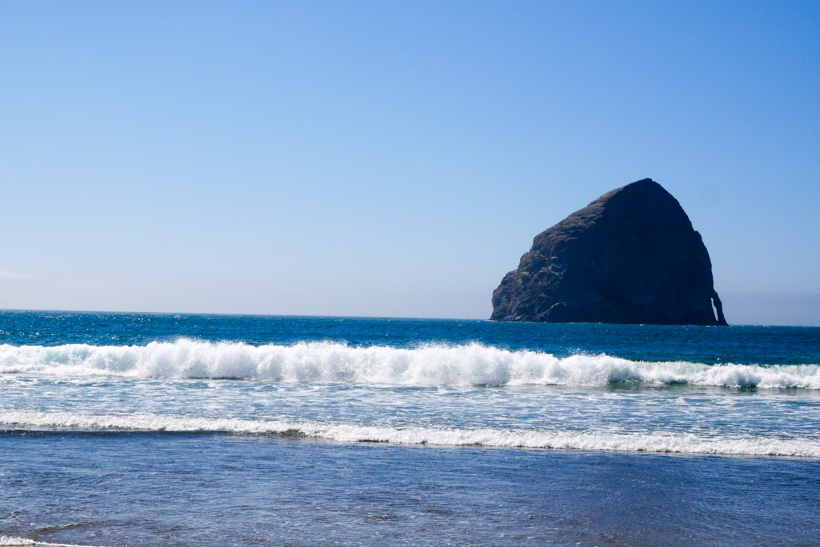 I caught this on video where a kayaker started on the beach and kept inching his way out into the water to catch a wave and thrust him further out into the ocean. I loved watching him maneuverer through the water and navigate his best route amongst the waves crashing onto the beach. 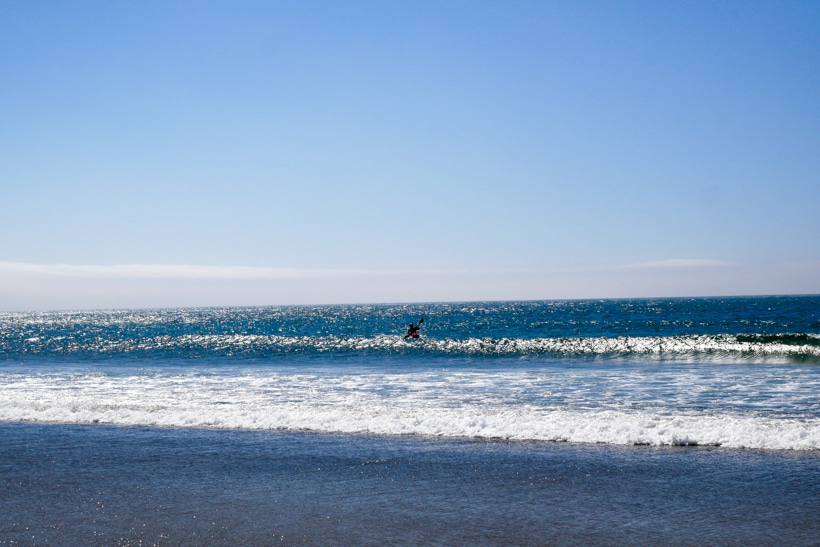 What a great end to our Northern Oregon Pacific Coast Highway quest drive! I've been able to watch sunsets across the ocean waters. I've watched people kayak out into the ocean. Dogs were running on the beaches. Waves were crashing against the rocks. Lily was kicking up dirt as she bounces and runs through the sand. Met up with friends along the road. Met new friends throughout the quest drive. I smelled the salty air from the ocean. What a great quest drive! I love the Oregon coast and am just taking my time traveling down it and enjoying the ride. Have you been on the Oregon coast? What places would you recommend to visit? Related Post/Video All of Oregon Coastline: 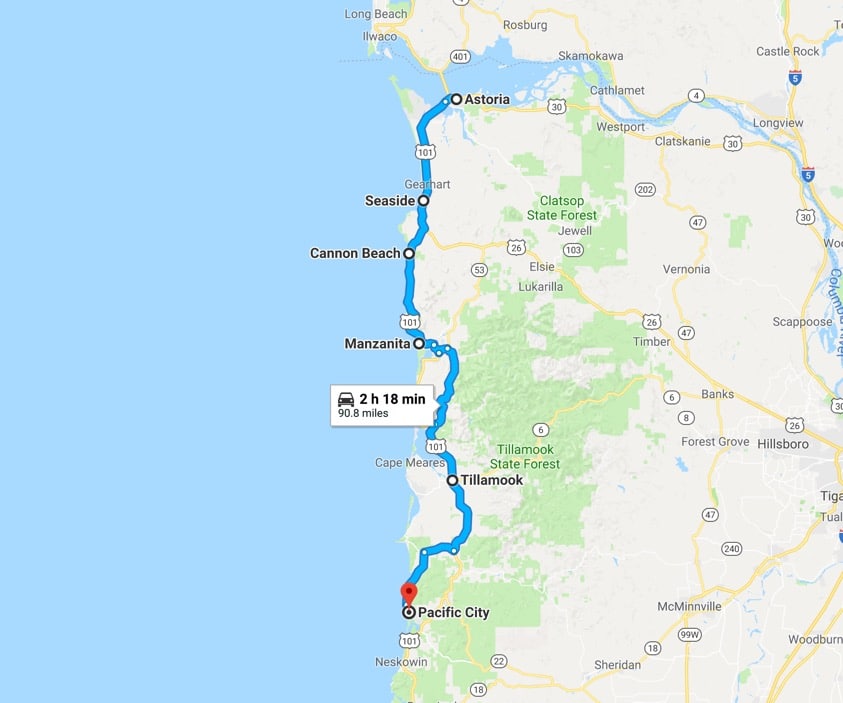 Take a look at all of the places I've been on: Full map of all my travels Miles: 95 Average Miles per Gallon: 15.5 Road Conditions: Roads were clear and well maintained. Weather Conditions: Cool at night around 40s and days were 60s-70s on average while I was there in the later part of August. Time of Year Visited: Late August

Panasonic Lumix G85 Camera – For most still images and vlogging Sony Action Cam FDRX3000 – For dash cam and walking/talking video Joby Gorillapod – Used for holding the cameras as a tripod or mounting to just about anything to capture a shot. Xenvo Iphone Wide Angle (and Macro) Lens – Clips onto your iPhone did give you a wide angle view of your surroundings. Ulanzi Metal Smart Phone Cold Shoe Mount – Attaches to a selfie stick, but allows you angle the camera and it has a mount for an external microphone. AllStays app – Use on phone or desktop for finding gas stations, RV parks, campgrounds, propane, and more on your travel route. Verizon Data Plan – Best nationwide coverage as of this post while traveling. SaveSave