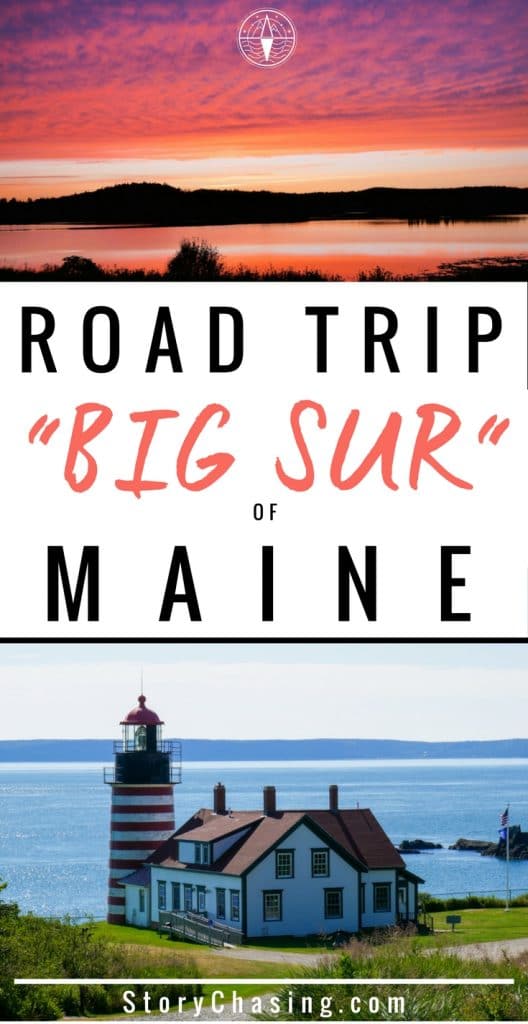 I wasn't sure if I would venture out so soon from my trip at Mt Desert Island, Maine for the “Big Sur” of Maine scenic route to the Easternmost point of Maine.

We packed in quiet a lot of adventure in three days so I was tired and I'm behind on editing videos. As of this moment, my posted videos show I'm in Yellowstone National Park, but here I am in Maine, almost two months later.

With the task of figuring out how to work, travel, and escape the heat – I was ambitious in my travels and drove more than my typical 50-60 miles per day.

The fact is that weather really does dictate much of my travel, but this is my first year and I'm still trying to figure all this out.

So, I decided to head out to Halifax, Nova Scotia in Canada and circle around to Old Quebec City, Quebec and then back into Maine. If I do this right, I can travel 50-60 miles per day, emerse myself in that area, like hiking and sightseeing, still work Monday through Friday, and get caught up on my videos (that didn't happen).

I'm technically on vacation until this coming Wednesday so I really want to enjoy this area of New England and enjoy the beauty and people. 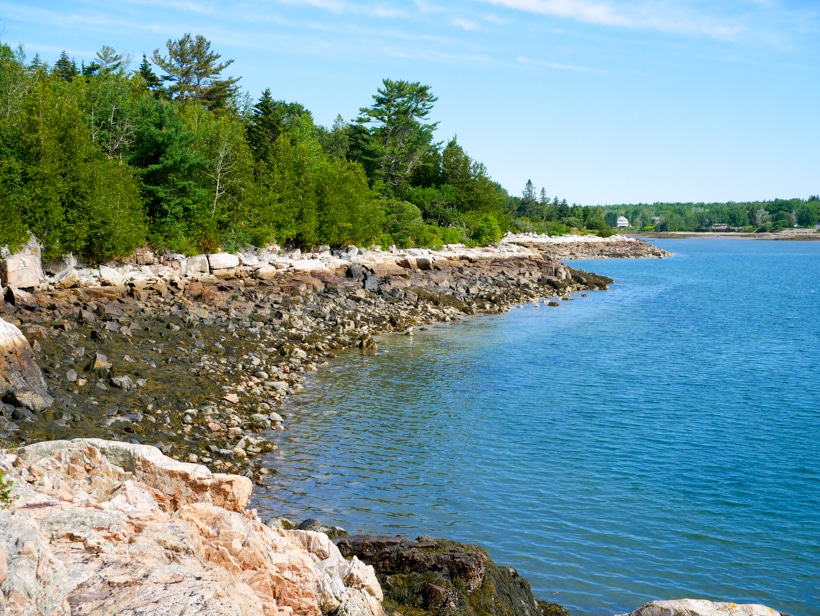 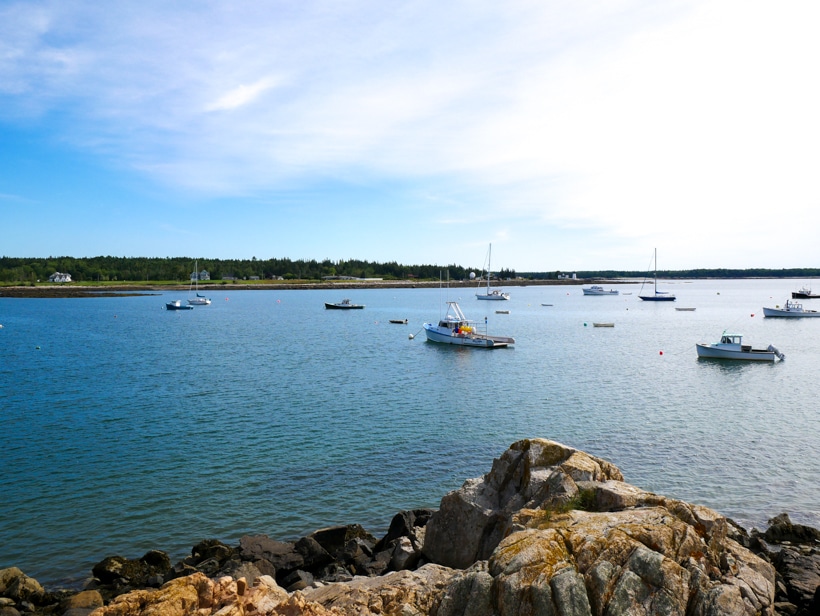 So here I sit, at Sunset Point RV Park in Lubec, Maine looking out over Johnson Bay. Lily and I have already explored down to the beach, looking for sea glass and enjoying the view; however Lily found something else.

I'm not sure what it was, but it was this dark, black gooey substance – and while I was taking pictures she decided to roll in it, which is what she does with dead animals sometimes. I don't get it.

The beach was just several feet from said rolling-in-animal-goo incident, so Lily got a bath in the sea water. She was none too happy and neither was I to see that the black goo was now turning her white fur green.

Great. Now I have a green dog.

Oh, but guess what?

I have Dawn dish detergent – that I use for the toilet (that's another story) – which supposedly cleans off oil from animals.

When we trudged back to the RV, Lily now sopping wet and covered in sand sticking to her wet legs and underbelly. She but on the breaks when I tried to put her in the shower.

You'd be surprised how persistent a 10 lb dog can be when she doesn't want to go somewhere.

I doused her with blue Dawn dish detergent and suds' her up from head to toe. That black goo was all over her legs, both sides of her face, her neck.

I finally got her all cleaned up and that nasty goo off of her. Yuck!

Easternmost Point of the US

The drive started out from Ellsworth, Maine where I had camped out at Walmart for the night and diverted down several southern inlets to the ocean. First was Schoodic Point and then to Jonesport.

The drive was so beautiful with few tourists in comparison to Portland all the way to Bar Harbor. There may not have been all the shops and restaurants like those areas, but it had plenty to offer with its own shores, fishing boats, scenic views, and cafes spread throughout the small coastal towns.

It was a pretty easy drive with only some narrowing roads that were a bit bumpy, but most were well paved and the RV did just fine.

Lubec is the easternmost point of the US – established in 1775 – and was well-known for its herring, pollock, and shellfish production until the War of 1812 halted some of the transport herring. It never rebounded and the population declined. 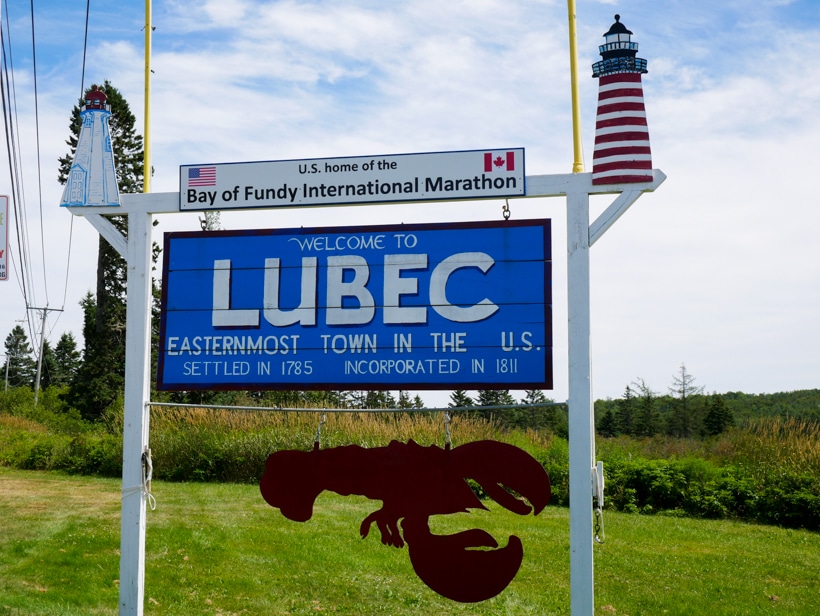 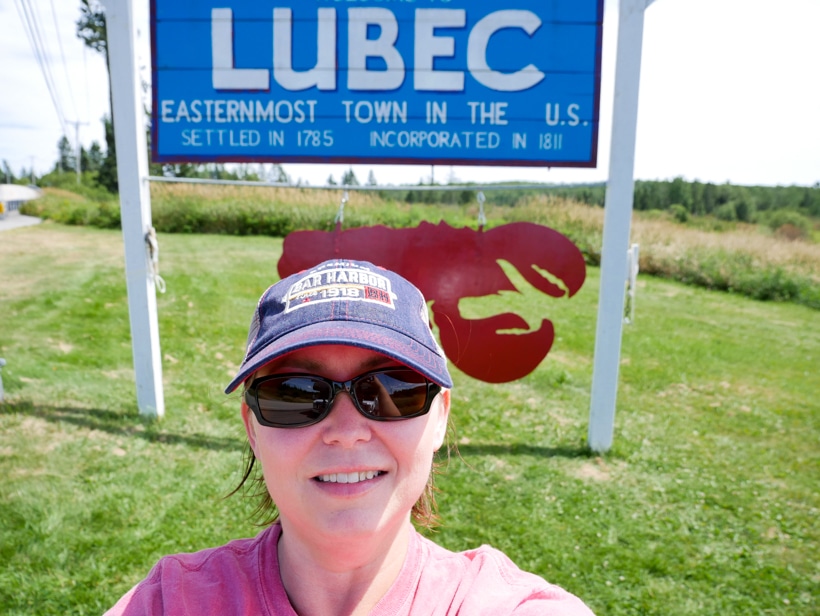 Lubec still relies on the fishing industry and the tourism especially when the bridge was built in 1962 to Campobelloe, Canada and the establishment of the West Quoddy State Park.

Overnighting at the Only RV Park in East Maine + BEST SUNSET EVER!

Before heading out on the “Big Sur” of Maine on Highway 1, I scoured the area for places to stay since there wasn't any BLM, National Forest, or Walmarts. So I found the only RV park in Lubec, Maine.

I must say I wasn't quite sure what to expect, given there was no competition in the area, which can make for a not-so-favorable experience at times.

Let's just say I was impressed!

There wasn't anything overly fancy about it. It had your basic water and electric hookups with a sewer dump area. My campsite spot, #5, was level with grass all around – which was really nice.

However what makes this place so amazing is: 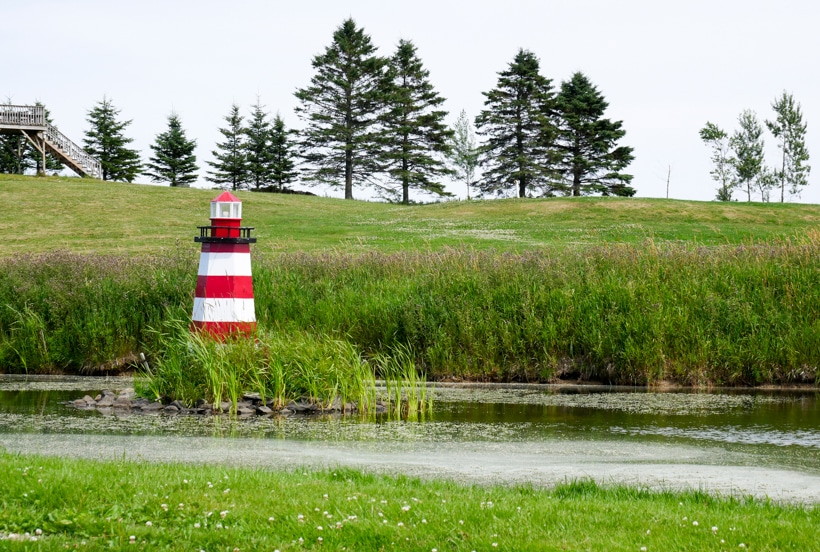 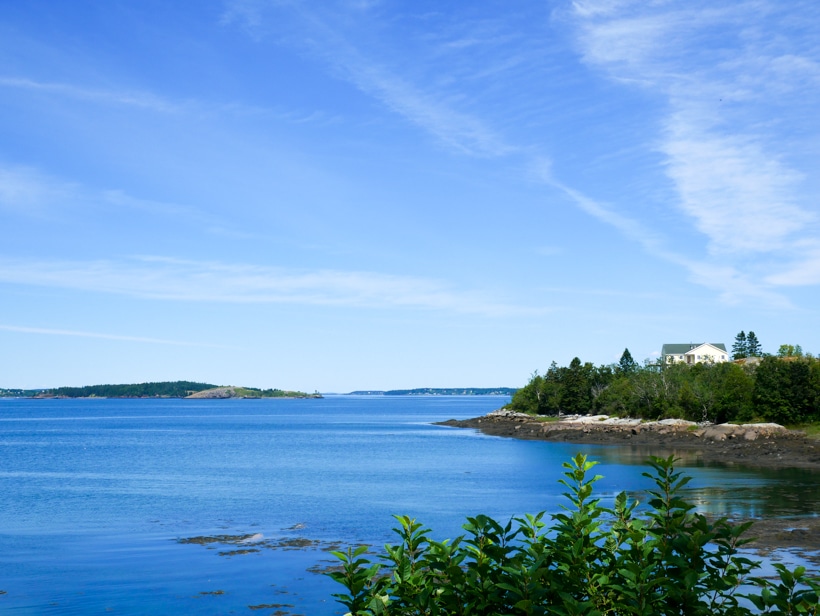 However, my favorite part was the sunset and the incredibly nice people I met who were also staying at the RV Park. I'm always astounded by the generosity of others and how well we all connect as RVers. I met Bunny who was parked just next to me with her husband (please forgive me for forgetting his name, but who can't remember Bunny!) and we talked about her love of photography, our RVing adventures, and just really enjoyed our conversations.

As we were about to sit by a campfire – we being Bunny's husband – we all watched the sunset. Talk about a beautiful color show! 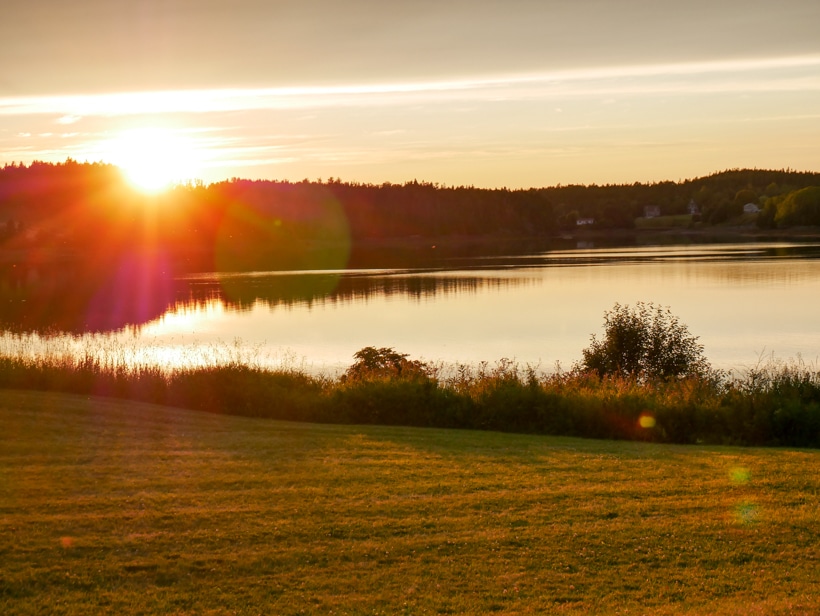 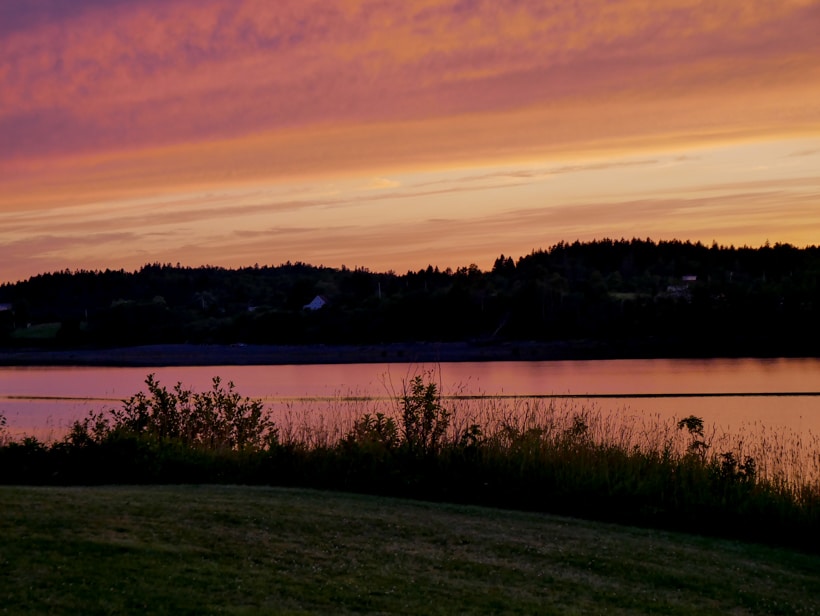 It literally was purple, then orange and yellow, then faded into black. I couldn't believe my eyes. With each snap of my camera's shutter button, the color show before me was changing. 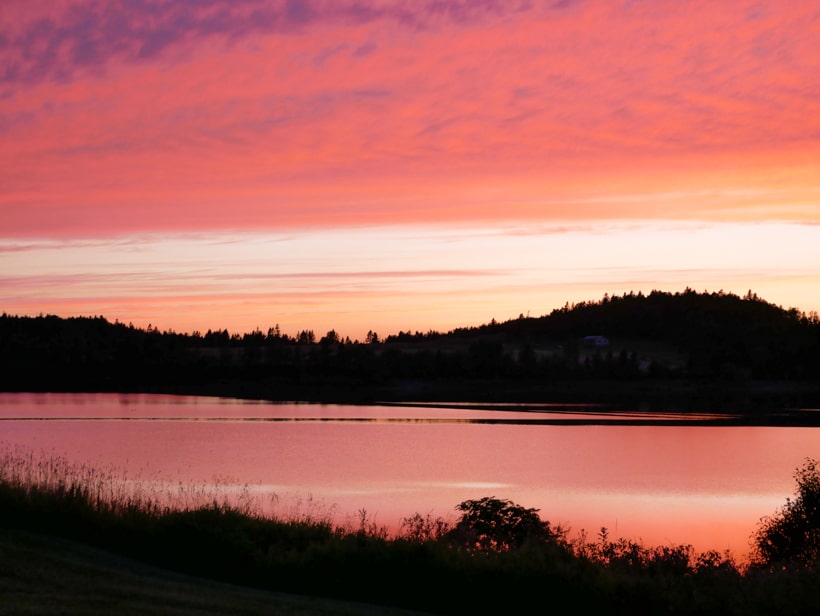 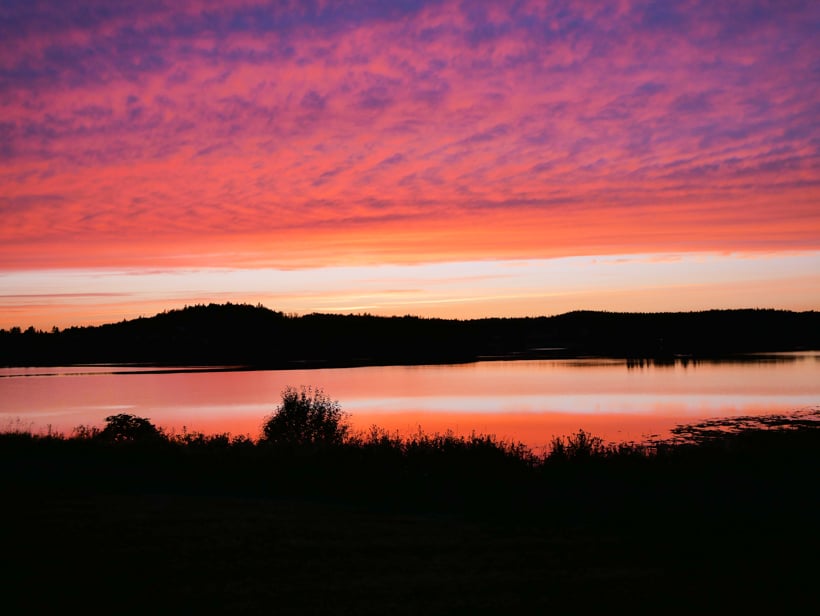 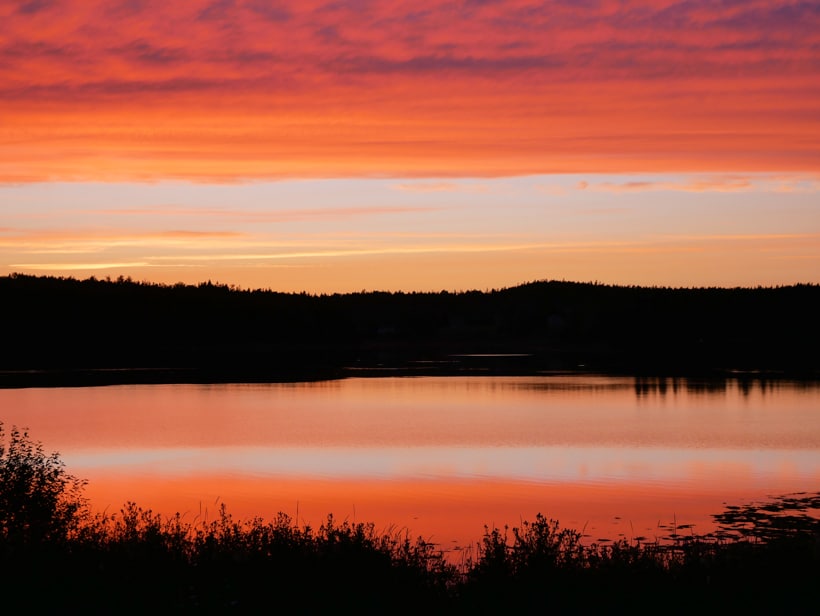 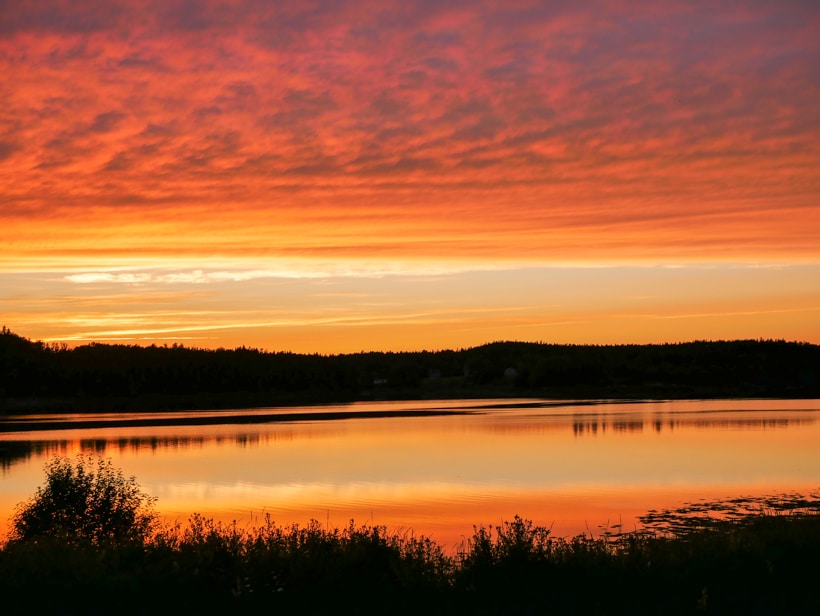 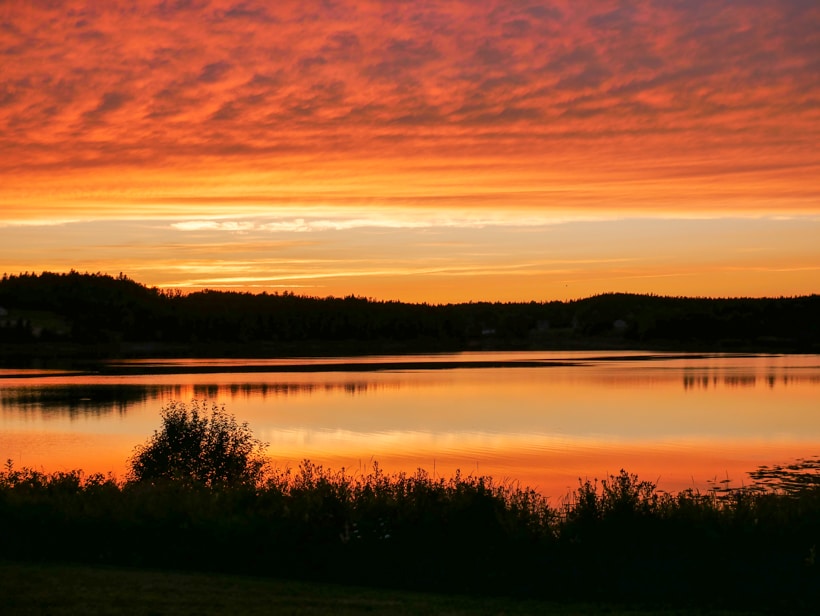 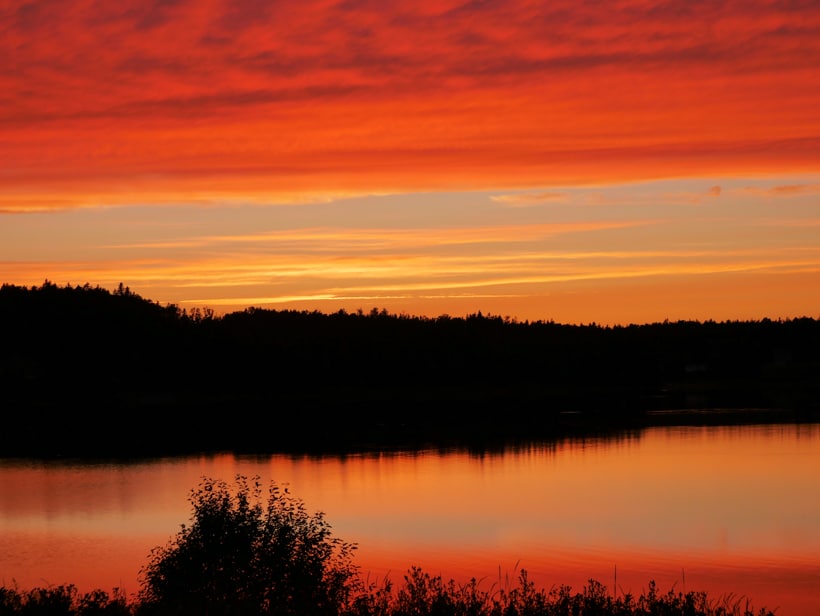 I'm constantly surprised by the beauty in this world and the painting it's always giving us as morning turns to night and the seasons change each year.

My heart is so full of gratitude and I absolutely appreciate this life I've been given and the ability to travel and explore.

Quoddy Head Lighthouse – Easternmost Point of the US

I stayed for only one night at Sunset Point RV park and then it was off to leave for Calais, Maine and then on to Canada, but before heading out, I stopped at the West Quoddy Head Lighthouse, built in 1858, between the Bay of Fundy and Gulf of Maine. It's now a museum and visitor center. 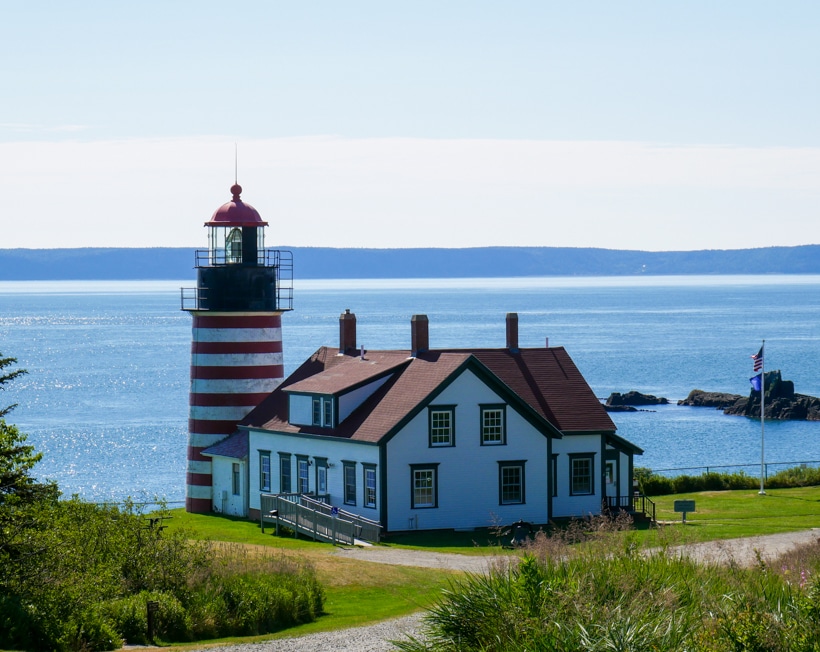 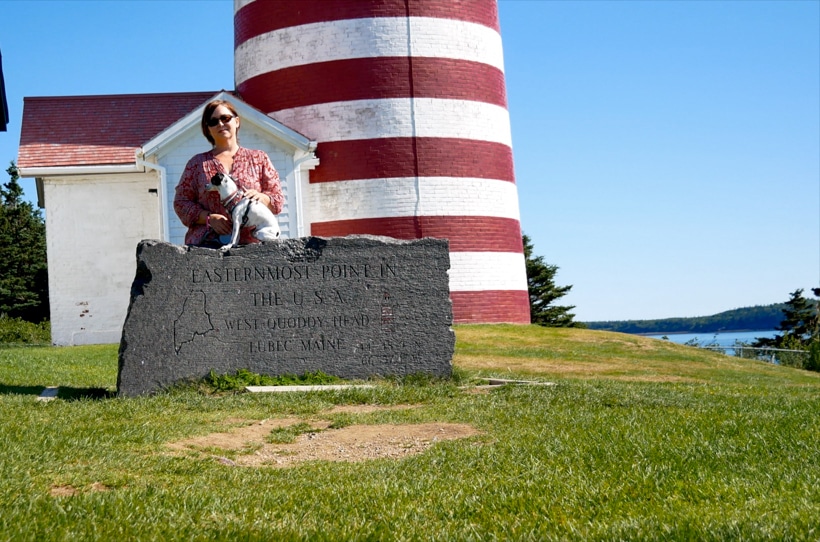 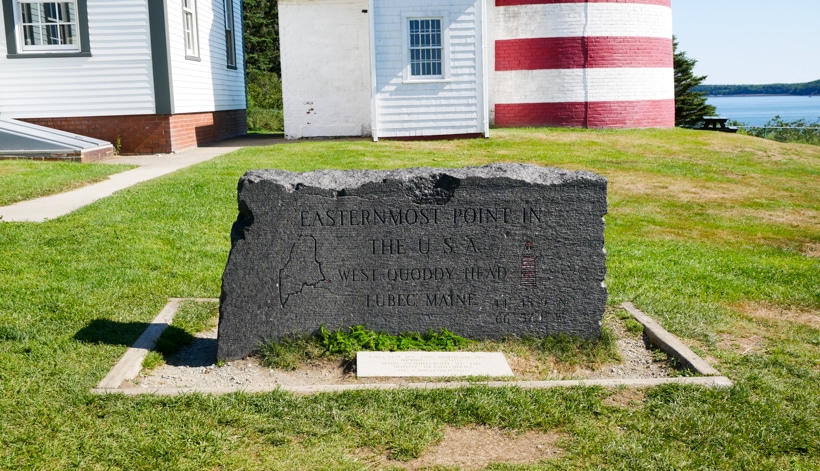 We ended up at the Walmart in Calais, Maine just before heading into Canada, but not before we visited Ray's Mustard which is a historic working mustard mill.

It was so much fun to learn about the history of this mustard mill from Abby and it's part it played in this region. You better pay attention though because Abby will test your knowledge during the tour.

Take a look at the small film on their website where you can learn more and if you're in that area, stop in and get a tour. 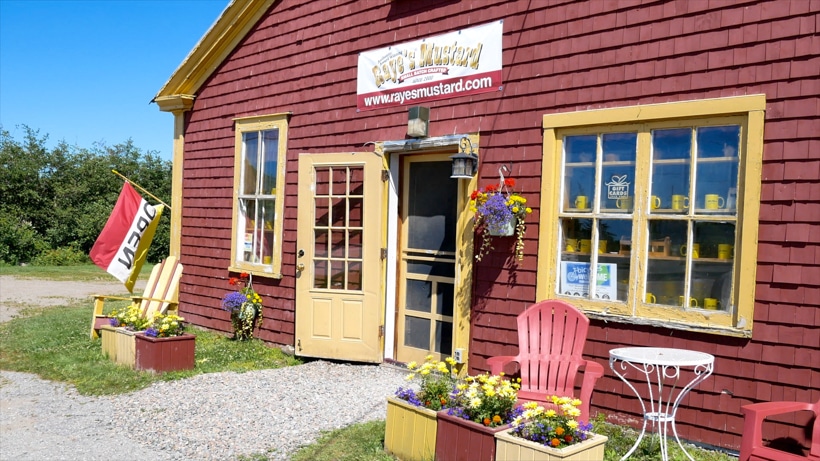 There's taste testing galore with a little tasting table of tiny spoons and all of the gourmet flavors as well as the yellow classic. Admittedly, I am a mustard lover so I walked away with $70 of mustard! In all fairness, before you gasp at the dollar amount of my purchase, I did send some to my cousin who is a food blogger so she could also test out the goodness.

I think my favorite is the Dundicott Hott and the Down East Schooner. Yum! 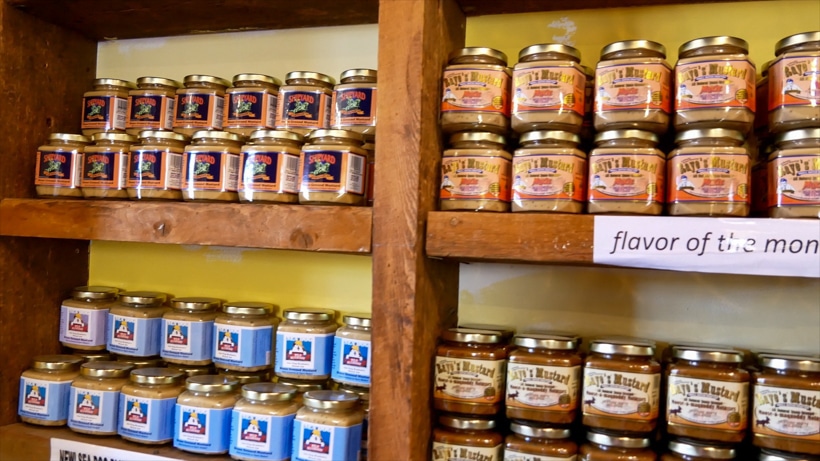 Have you been to the Easternmost point of Maine? Tell me your story.