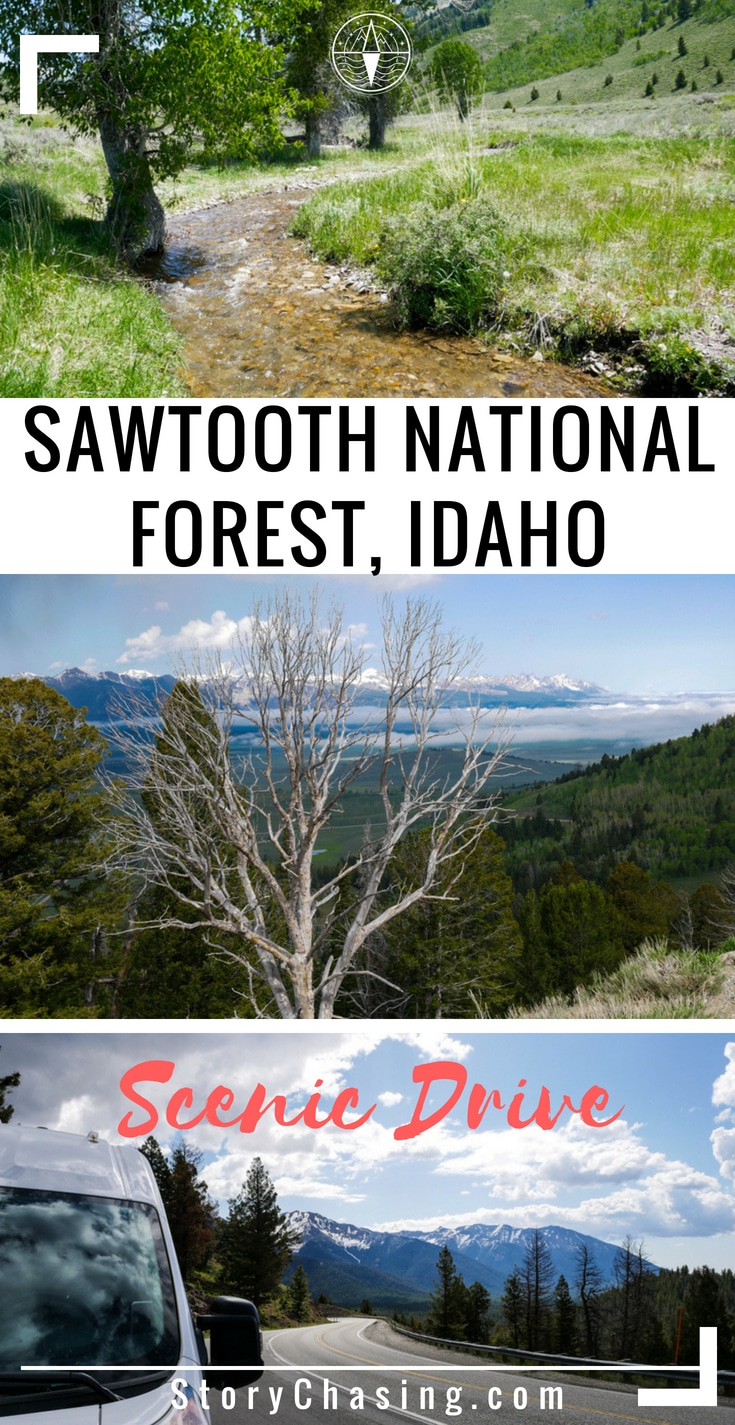 Well I’m off on another National Geographic scenic quest drive through Sawtooth National Forest. This was my first time stealth camping in a city, albeit small city of Ketchum, Idaho in Sun Valley resort area.

Sawtooth National Forest is a place so rich with wildlife, rolling hills and mountains, densely forested trees, and temperatures ranging from 45-85 degrees – when I was there in early June – depending on your elevation.

There’s definitely something for everyone when you travel to Sawtooth National Forest. You can hike through the forest and along the many trails, take your boat out to the lakes, ski in the winter time in Sun Valley, make use of the day camping areas, boondock on BLM, and more.

I could have stayed for so much longer, but it was time to depart and get moving to visit friends in Boise, Idaho.

I also visited Craters of the Moon National Monument, which was just a several hour loop drive in the park, and then made my way around the scenic drive from Shoshone, Idaho to Boise, Idaho through the Sawtooth National Forest.

Craters of the Moon National Monument

This is one of those spots where you literally have to go out of your way to see Craters of the Moon. It’s on a road off of the main highway 15. From Blackfoot, Idaho, it’s about 120 miles before you get to the national monument.

It’s well worth the drive though for a day trip or even an overnight at the campground within the national monument.

My annual America the Beautiful pass had expired so I took the opportunity to renew while at the visitors center. As much as I visit national parks and national monuments the $80 for the annual pass is well worth it.

I thought I might stay at the campground while there, but it only took me a couple of hours within the park to travel the loop, site-see, and do some light hiking so I decided to forego the campground and the expense.

The campground was like nothing I’d ever seen. It was like these pitted boulders of volcanic rock with spaces for you to park your RV or place a tent. 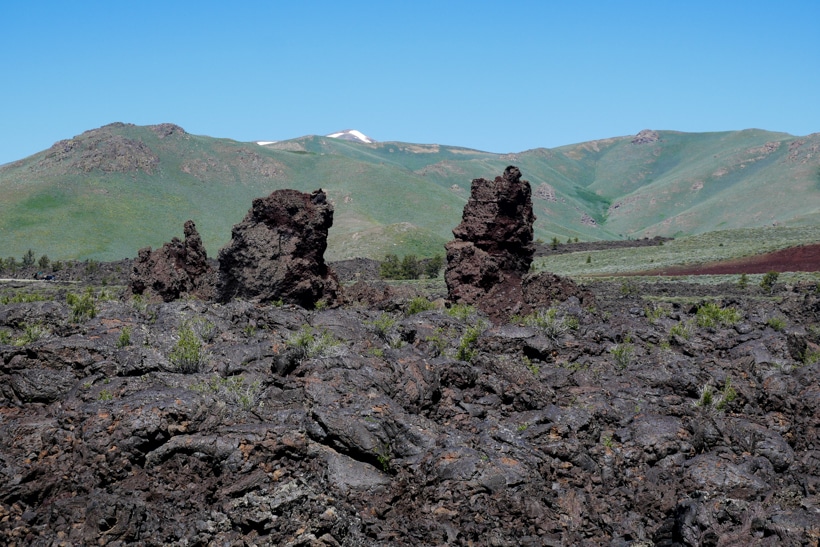 Also note that there is no cell signal within the campground (I drove around it first before doing the scenic loop) though I did get a signal most of the time throughout the loop drive through the park.

Craters of the Moon was quite the sight with volcanic rock formations, lava flows, and cinder cones that made me think I was on a different planet. It was really unique and a huge difference than the lush green, rolling hills just before the national monument and after. 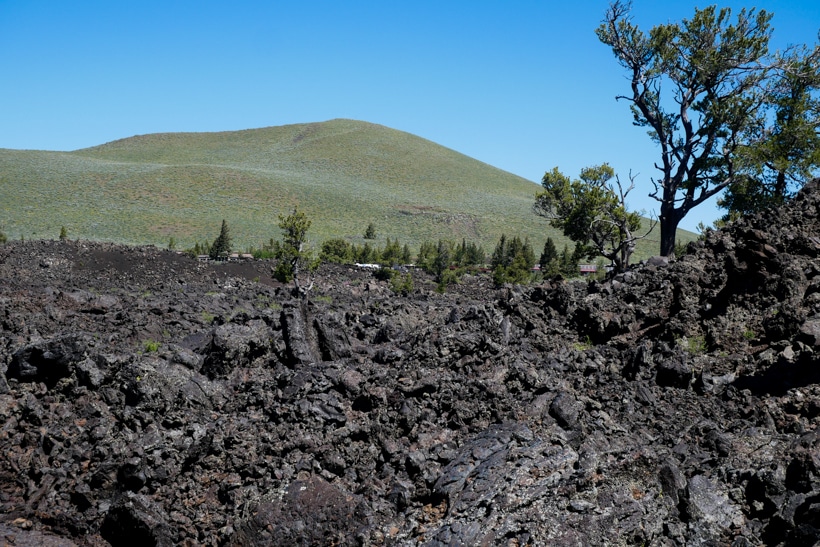 What’s weird too is that there is no volcano, but instead the lava flow came from cracks in the Great Rift eruption between 2,000-15,000 years ago.

Despite the seemingly hard landscape of lava flows, the national monument is filled with breathtaking beauty of plants and wildlife. 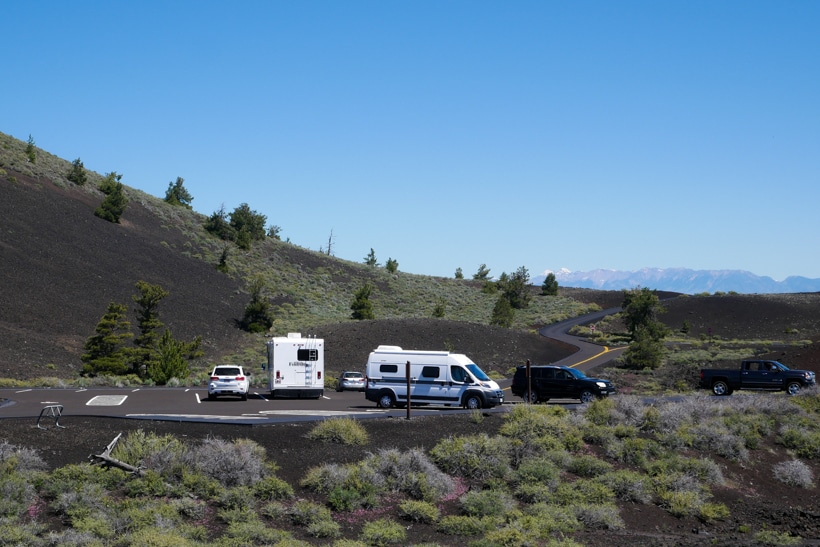 I also found some little chipmunks munching on these pink dwarf monkey flowers that covered many areas of the park along with yellow rabbitbrush.

Ketchum and the Sun Valley area are pretty cool in the summer and OMG the views, the land, the day use parks – it was all amazing.

I found some BLM land just a couple of miles outside of Ketchum, in the Sawtooth National Forest, to stay while I was in the area and I was looking forward to the incredible nature around there.

The BLM was located just past a swanky residential area on a well maintained gravel road and oh, the views are incredible!

Beautiful green mountains, lush green grass, sun shining, and wait – what is that I hear?

Is there a river?

I walked down a short distance from my campsite and there it was, this sparkling, flowing river dotted with trees. It’s truly nature at its finest and I couldn’t believe how incredible the surroundings were. 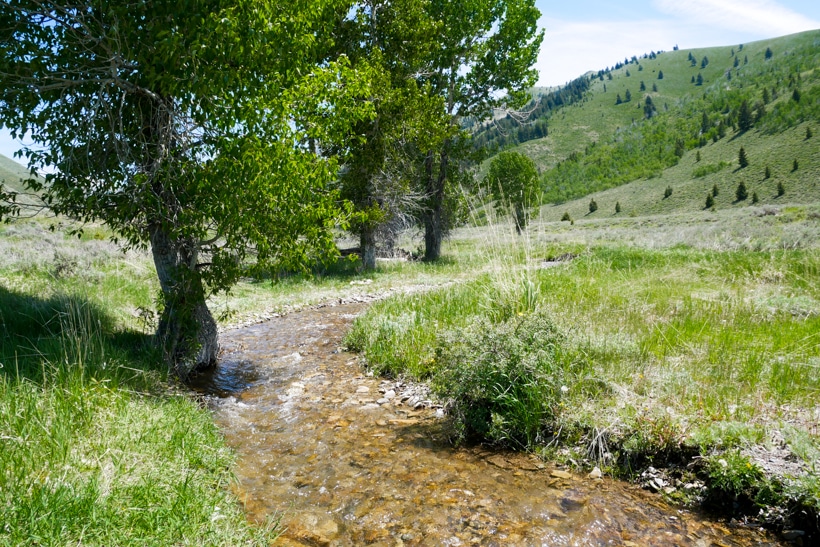 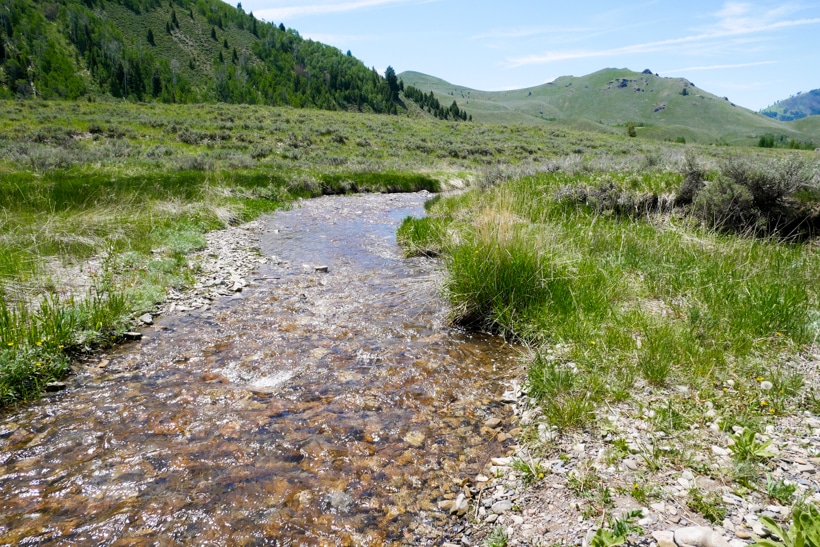 I only wish I could have stayed longer, but there were so many field mice running around and I swear they were circling my van trying to find an entrance.

This was in broad daylight too.

Okay – I hate mice, but I wouldn’t just kill one for no good reason. A good reason would be that I couldn’t live trap it in my RV and therefore have to resort to quick-kill bait traps – which I’ve only had to do once, but it was awful.

Now that I’ve prefaced with why I would’t kill a mouse – I killed a mouse that day. It was an accident. It was the one that accidentally got sprayed.

I felt really bad. I even tried to get him to move along to the river to wash him off. I wasn’t about to pick him up.

I’ll spare you the rest of the story because I know he died painfully. It upset me so much I had to leave.

Yes – I know, it’s just a mouse. Some will think, “I can’t believe she’s getting upset about killing a mouse” and some will understand my pain.

After the murder of an innocent mouse – which is debatable on his innocence considering he was circling my vehicle – I was pretty sure his family was going to come after me for revenge and find some way into my van.

So I left my beautiful spot after one day and headed into Ketchum for some stealth camping.

First task was to figure out where I could stealth camp. I’ve never stealth camped before and I wanted to make sure I stayed in place that was legal, wouldn’t get me a knock on the door at night, and also not freak out residential neighbors for an unknown van parked on their street.

I did find out through the Ketchum City website that it’s completely legal in Ketchum during the non-winter seasons to overnight on specific streets. You'll want to review their parking map to make sure you're in compliance else you'll get a knock on your door at night or towed.

I choose a residential neighborhood just a couple of streets outside of the main downtown area in front of some swanky condos – which by the way are being sold at close to one million dollars if you’re interested.

This is a resort town after all so you’re going to pay to live here. However, I lived there on the “streets” for about a week and half stealth camping and it was pretty amazing.

It’s a bit expensive in town to eat and grocery shop, but it was well worth the time there.

It has this small town feel, yet great village shopping areas with all the typical restaurants you might expect from pizza, Mexican food, American fare, sushi, and even a raw food restaurant.

Ketchum has lots of outdoor activities like music in the park, poem readings on the street, a Brewfest, bicycle rentals, kayak rentals, ski shops, and more.

I just loved walking around through the town and exploring with Lily and partaking of the restaurant food.

During the day when I needed to work I headed over just about a mile north of town to a day use park right off of the raging Big Wood River.

It was perfect with a great cell signal, picnic tables by the river, a trail for walking Lily, a trash bin for, well trash, and a pit toilet restroom where I could empty my cassette toilet.

Then at night I’d head back into Ketchum, have some dinner, go for a stroll with Lily, and then settle in to my street stealth camping – which I changed each night.

My Hymer Aktiv van is doing well and I love the ability to stealth camp, hang out in the cities, go to restaurants and groceries without having to scope out the parking ahead of time. I love my Hymer!

Finishing the Remainder of the Sawtooth National Forest Scenic Drive

After a week and half of taking it easy in Ketchum, I decided to leave and visit some friends in Boise, Idaho and pick up mail and packages I had sent there.

Plus I heard the mountains were going to get hit with snow the next day so I wanted to get moving before that cold front came through.

It was just a day drive north to Stanley, Idaho, and then cutting over west then south through the Sawtooth National Forest. 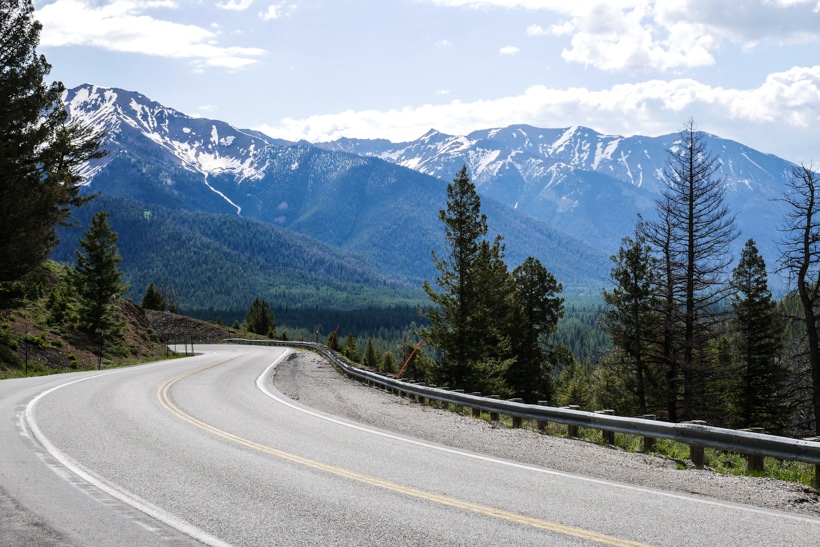 Temperatures went from 60s to 40s at the highest elevation and then into the 80s as I descended into Boise.

Sawtooth National Forest is lush with an abundance of beauty. 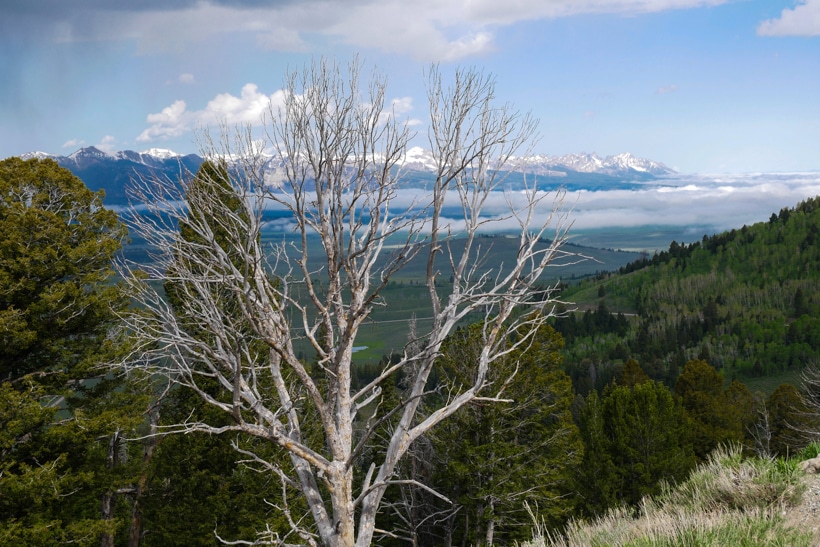 Even the burned out areas were beautiful.

At one point I had to pull over. I couldn’t believe my eyes. I know I grew up in the city and in places where we barely got snow, but there was this huge measuring stick coming up out of the ground.

Its measurement went all the way up to 12 feet.

I like adventures, but 12 feet of snow doesn’t sound like my kind of adventure. Now maybe if I were in a snow mobile or something, but that’s a lot of snow.

The Sawtooth National Forest scenic quest drive ended in Boise, Idaho with high temperatures and a stop at my friend Cortni's home, who by the way, flips trailers for a living so if you’re ever interested check out her crazy beautiful work to see her past and current projects.

Have you stealth camped before? Any knocks on the door? How about driving the Sawtooth National Forest scenic drive?

If you missed my van tour of my new Hymer Aktiv, check it out and see the inside and outside up close.

Oh, and if you haven't already subscribed to my YouTube channel, head over there and subscribe soon so you can partake in the giveaways I'll be doing. I think you'll like it. No it's not a new Hymer van. I wish! 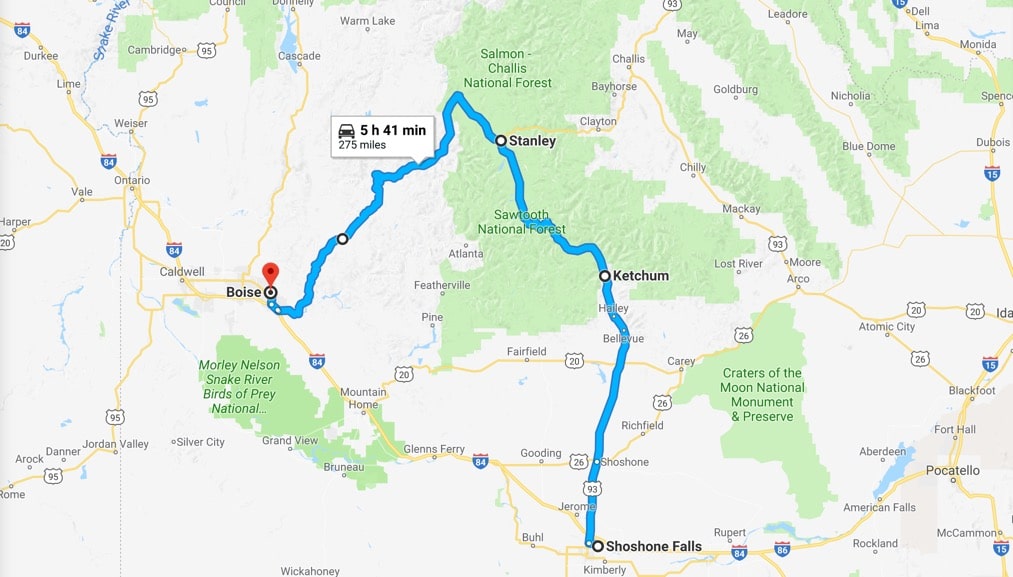 Road Conditions: Road were clear and very well maintained though on Idaho 21 the road was very curvy and speed was between 25-35 for many miles.

Weather Conditions: Cool at night in Ketchum and warmed up to 60s-70s during the day. Highest elevations in Sawtooth National Forest was 40's during the day and 20's overnight.

Cell Phone Signal Strength:  0-2 bars in Craters of the Moon National Monument, 3-5 bars around Ketchum, Idaho, 0 bars through most of Sawtooth National Forest until you got closer to some small towns.