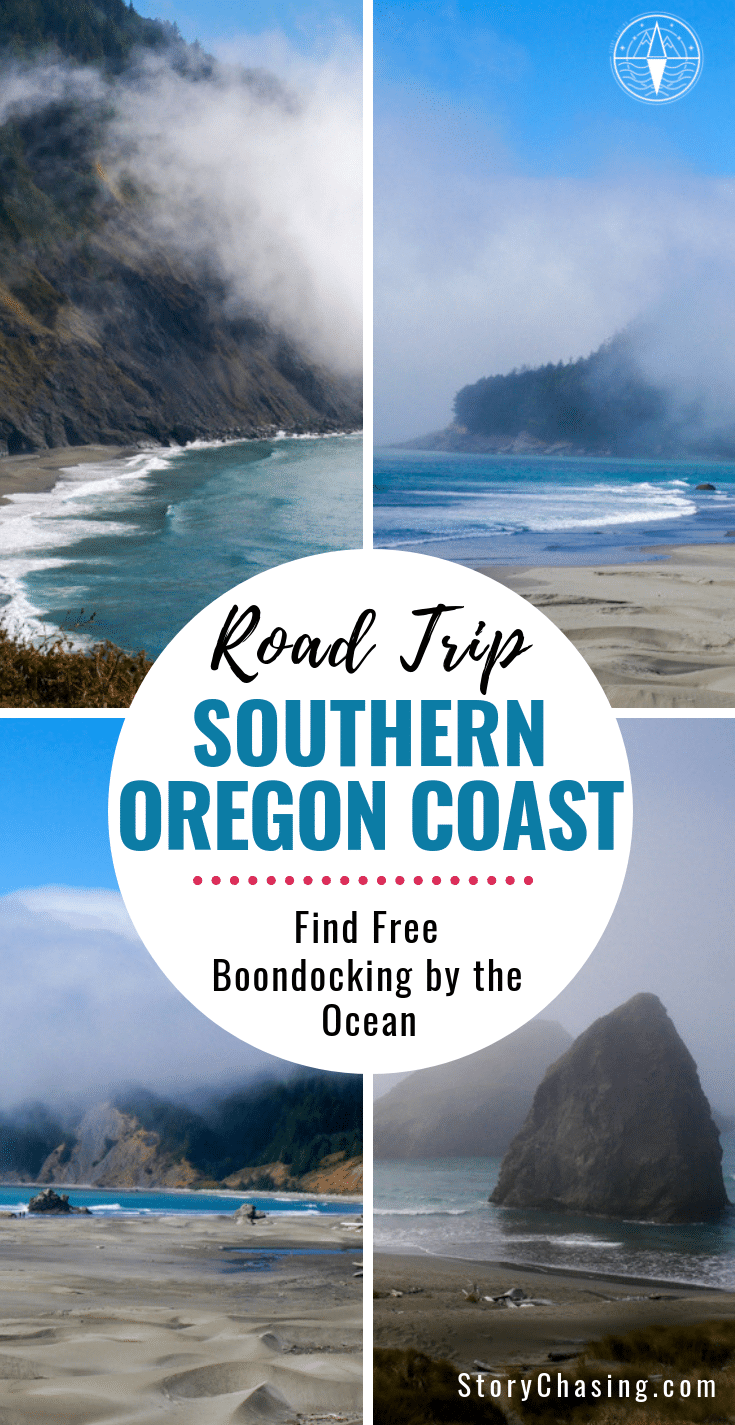 The Southern Oregon Coast drive was a perfect end to the entire Oregon coast road trip that I started in the latter part of August and ended in September for a total of three weeks.

We experienced quite a bit of fog traveling through the southern region of Oregon, so it made for an exciting drive and magical pictures and footage for the video from Bandon to Brookings, Oregon.

The topography is also starting to look more and more like what I remember from California with fewer trees and more rocks. The trees along the coast have that heavy windblown look – you know the kind where the tops of the trees have been shaped by the wind and slant inland.

We had a leisurely drive for the rest of the trip – nothing overwhelming or significant – just beauty all around us and taking in the cool breezes and sun.

Related Post/Video All of Oregon Coastline:

When Heather and Nick, from Vicaribus, and I left Bandon, Heather had the entire rest of the Southern coast planned out. You know me, I don't plan very well these days. I'm getting better, but she had found some great places along the way to visit, so Heather became my new travel planner for the day.

I followed them in their Vicaribus all the way to Brookings, stopping off at waysides, parks, beaches, and even a dinosaur park. The dinosaur park was pretty fun – I must admit – even though I was unsure of it. Heather gave me her disclaimers that it was a total tourist trap – yep – but it would be fun.

I thought it would be a park with dinosaur footprints – kind of a historical marker area – nope – fake dinosaurs spread amongst beautiful tall trees with some education mixed in between. It was a blast actually and so glad we stopped. 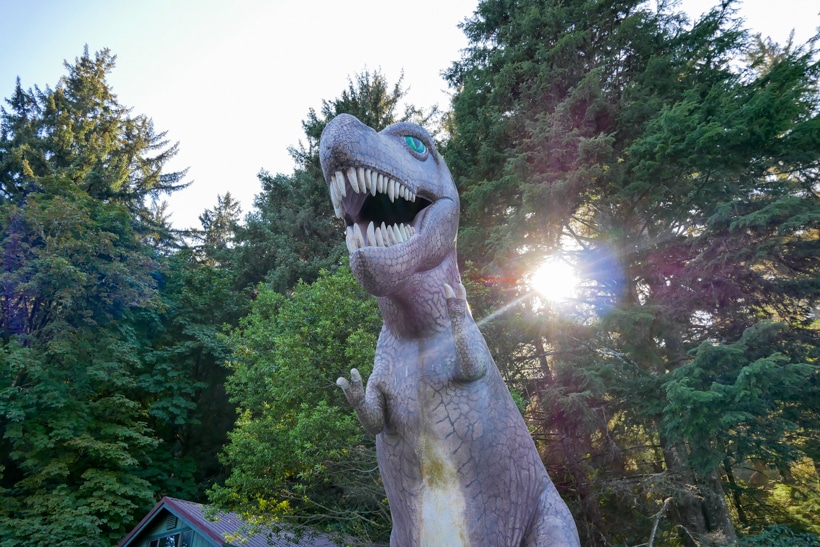 So while these weren't the real dinosaurs, it provided an enjoyable time, and I found a beautiful necklace in the gift shop with a tree pendant and a few tiny stones on one chain.

Port of Port Orford – Boat Haul Outs and the Beach

One of the first stops was at the Port of Port Orford to walk on the beach and watch boats hauled out of the water.

Miles and Lily ran like crazy after each other on the beach – flipping sand everywhere with tails wagging and ears flopping. What a life for a dog. Lily makes me so happy and to see her having fun too is even better. She and Miles became best buds during this trip.

Look how their legs are in unison! 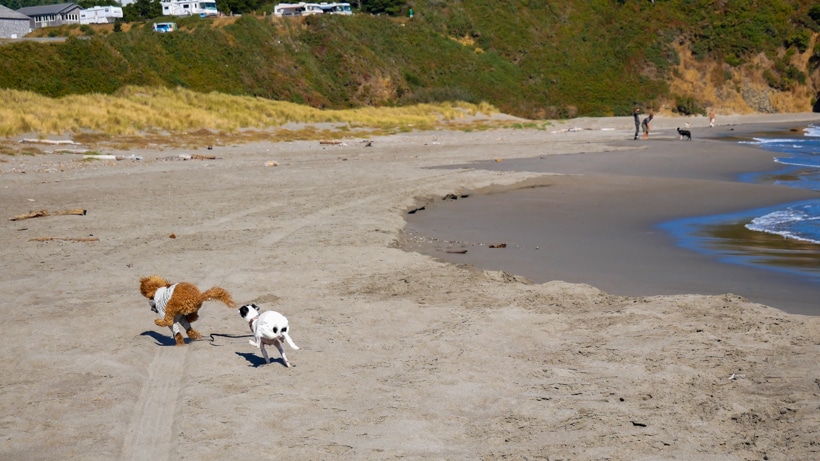 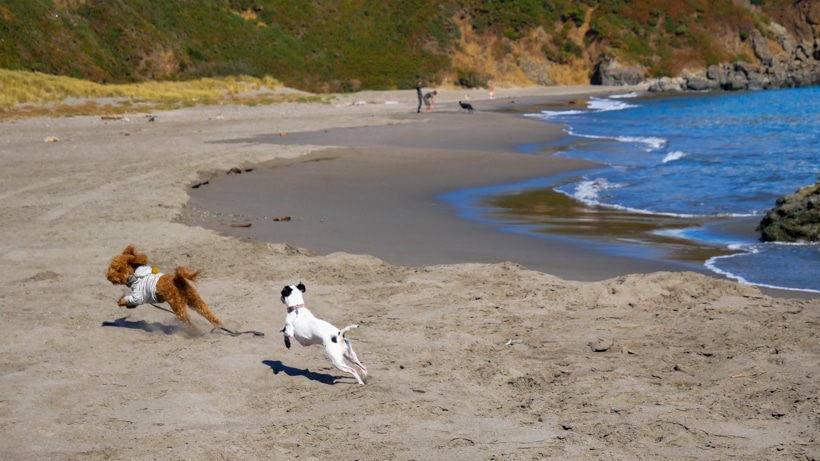 It was quite interesting to see them haul out boats from below in the water. This crane would drop with a hook and then pull the boat up from out of the water. I couldn't tell how they hooked it to the boat though. All of those vertical black tubes are to protect the boat as it rises in the air. 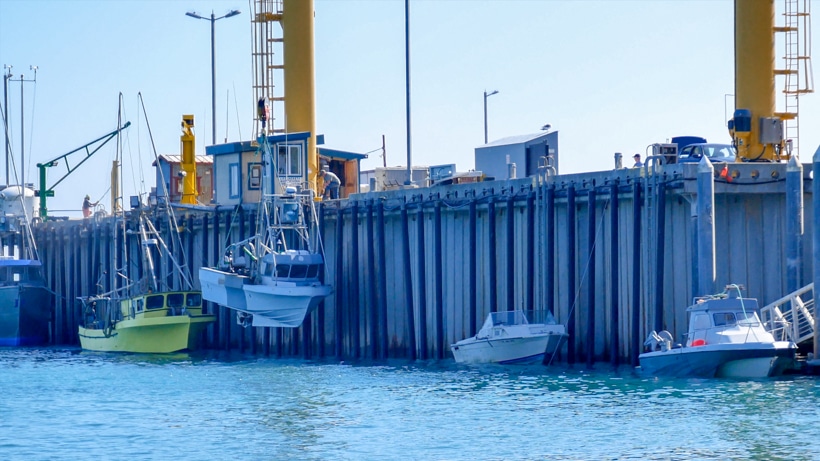 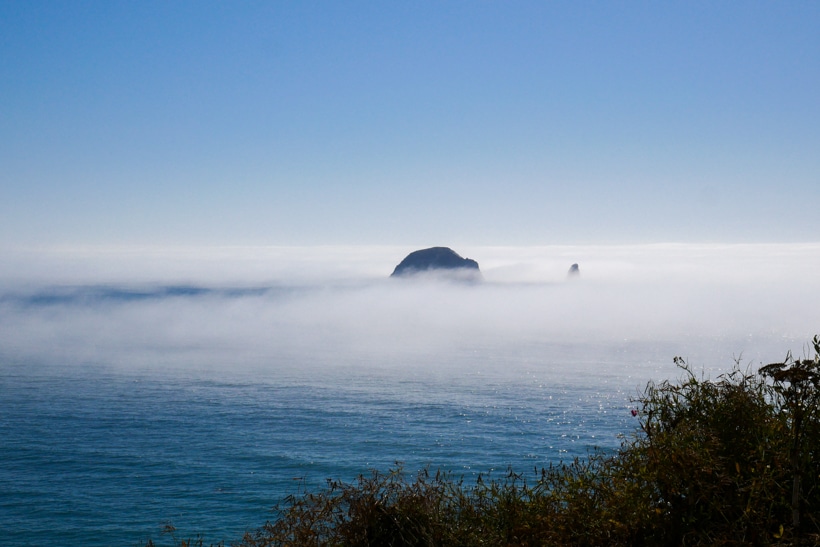 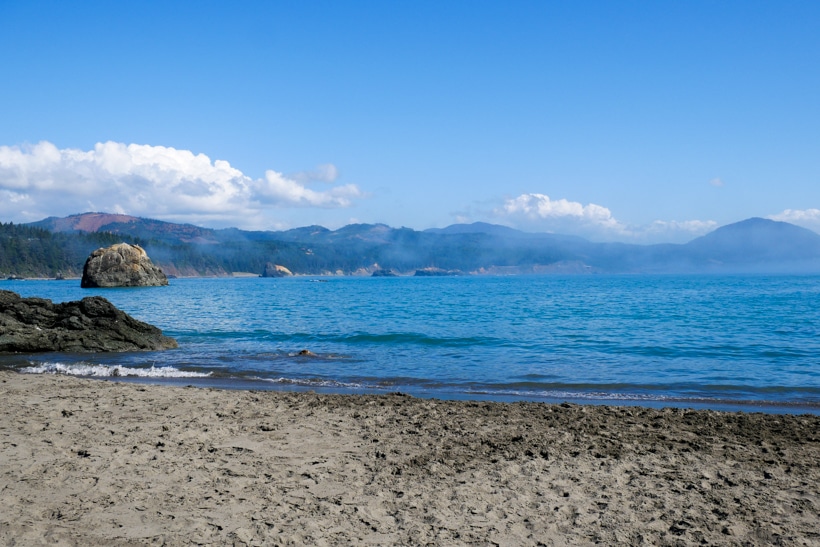 Today would be our last night in Southern Oregon, and we wanted to find a beautiful overlook off the ocean and beach.

As I followed Vicaribus through the twisting turns that brought us from shore to inland, we stopped at waysides to soak up the beauty and the fog rolling in. 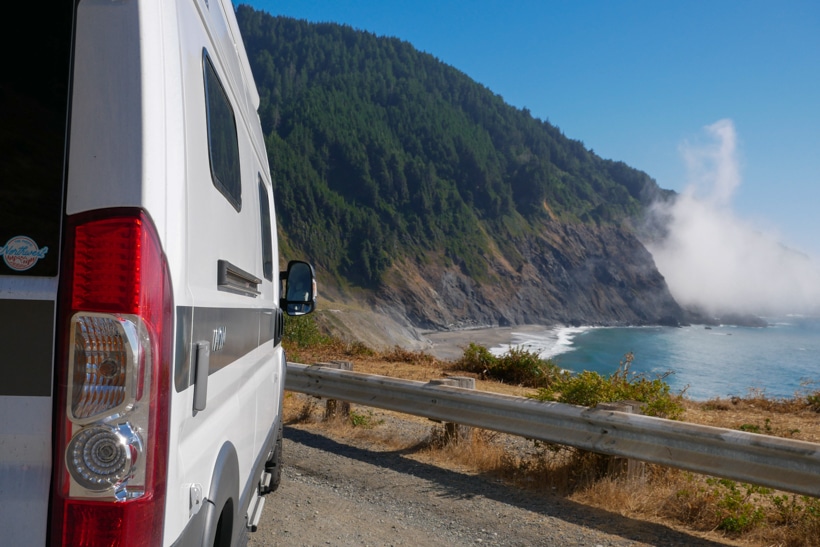 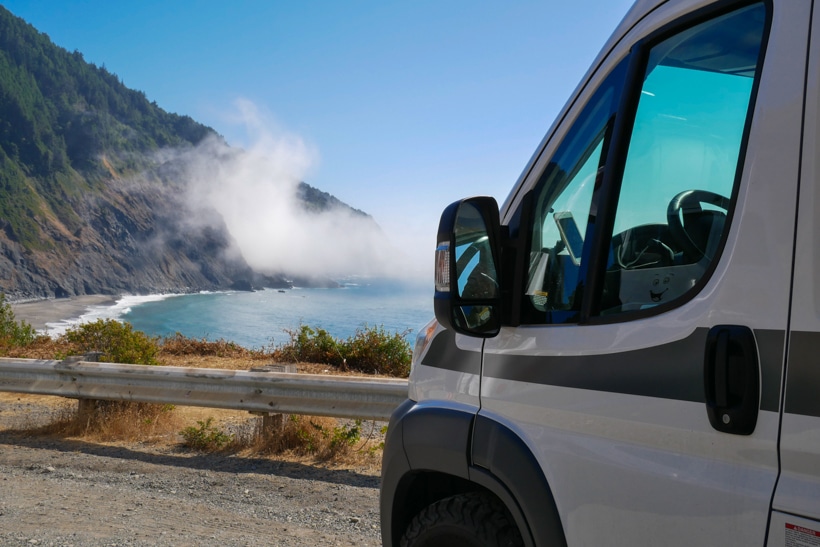 These rocky coves with colorful water and fog settling along the coast are breathtaking. I'm mesmerized by the beauty when I look at this picture – which looks like it was taken in Hawaii. Well, I think it does, but I haven't been to Hawaii – yet – so I'm only going off of pictures I've seen of Hawaii. 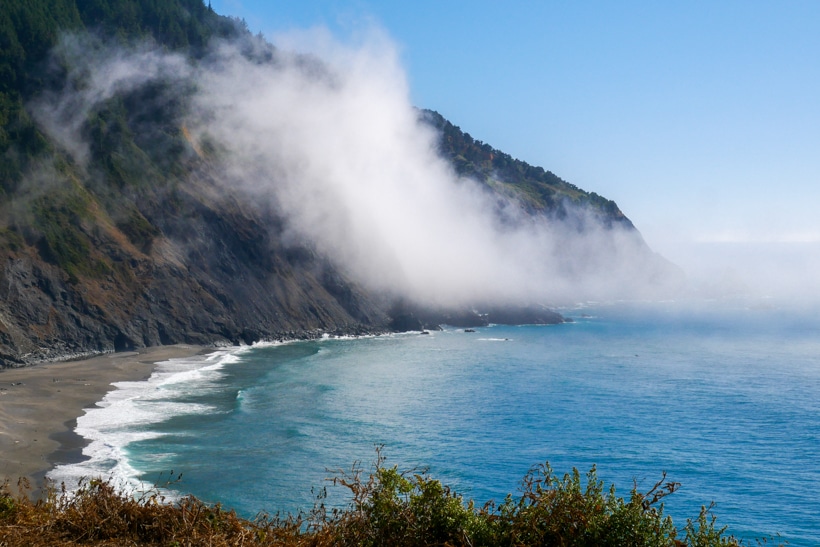 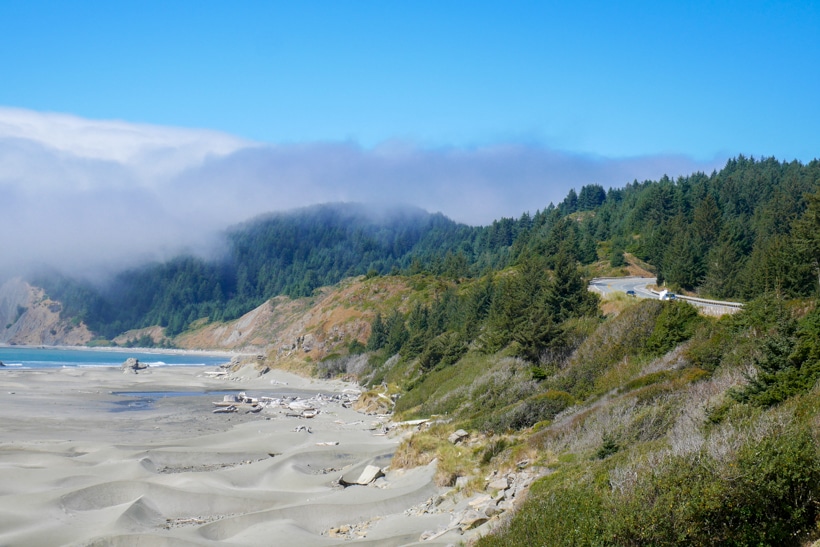 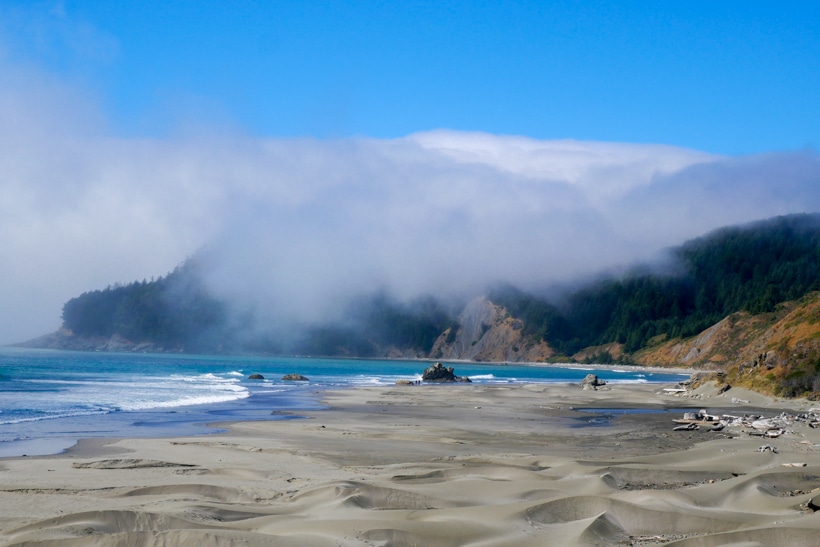 Finally, we found a place to park for the night. It was a very, very large overlook, well off the highway – which I like – and a trail down to the beach. 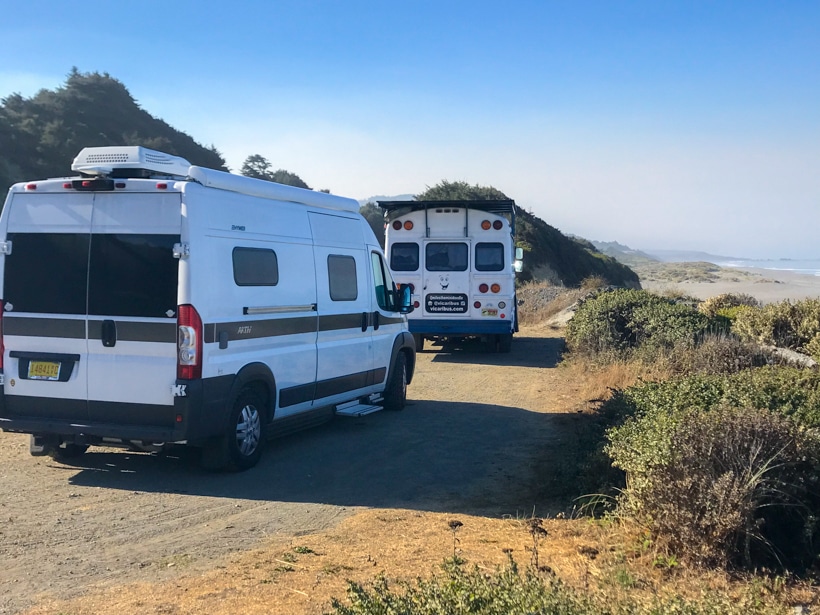 It was still early in the day when we arrived, and more people showed up to surf, take pictures, and hang out and talk with us. We met a guy who is from Ontario and had just made a trip up to Alaska in his truck and converted cargo trailer. He was traveling down the coast as well and then back up to Canada. 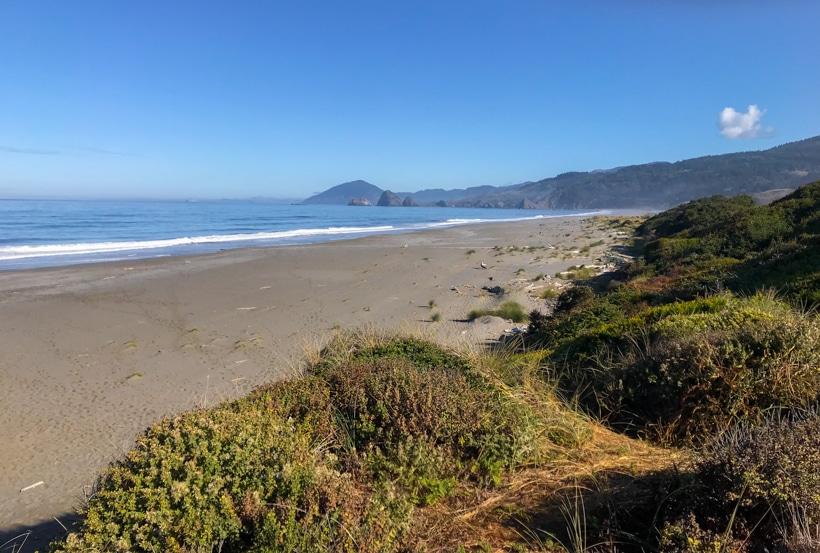 That's one of the joys of RVing full-time is meeting so many people on the road, and I get to hear their stories. Some are full-time some are just out for a quick adventure. Either way, I love being able to talk with them and share in the delight of travel and how it makes us all so happy.

It's a vast difference from my days of working in an office building or even working remotely in my home and doing the same thing day-after-day. I never know where this journey will lead or who it will bring into my life. 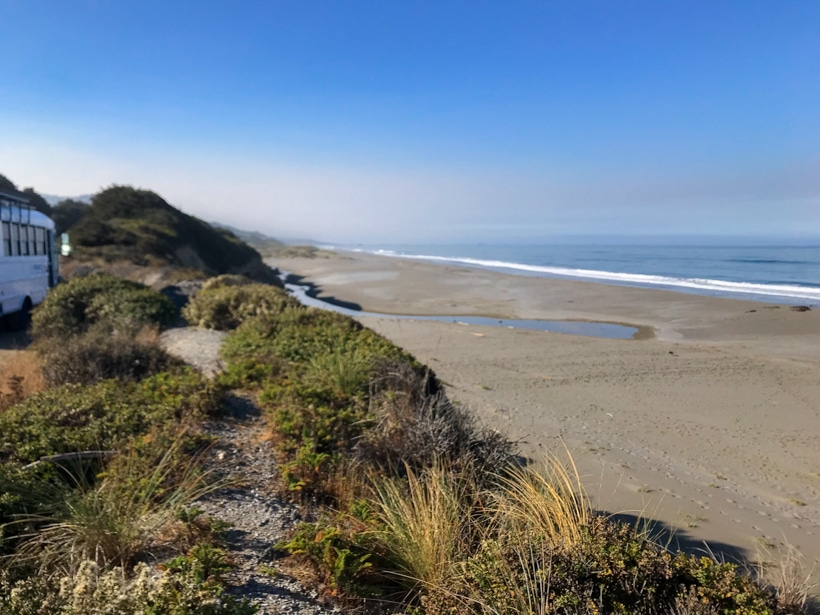 How do you like the hat? I think it works for its intended purpose. Somehow it brings me joy. I seem to smile bigger too! Lily looks a bit grumpy though. 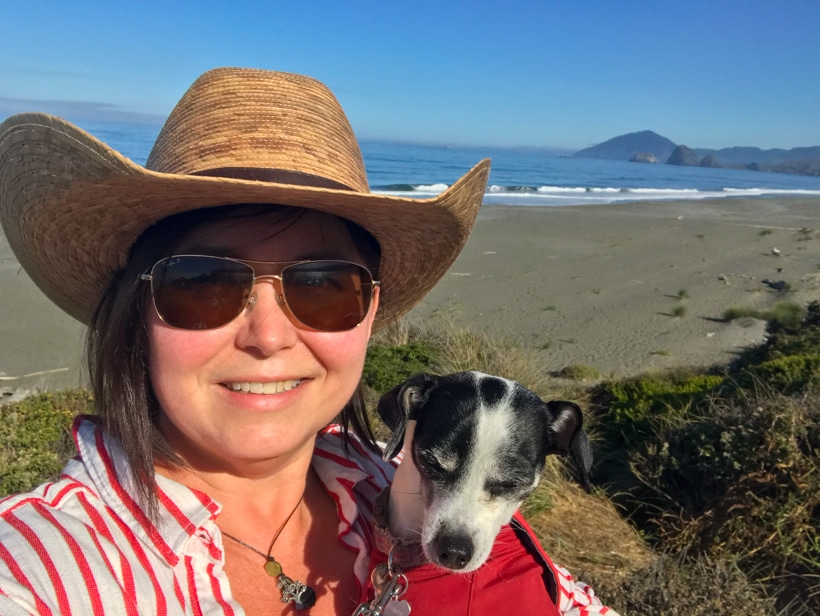 As the fog rolled away, the sky became black with night, and the moon was shining brightly. I stepped outside into the blackness to let Lily out for her last potty before bedtime only to shed a tear for the beauty in front of me.

I tried to get a picture, but iPhones don't work on capturing the night sky that well and my astrophotography is awful. I seriously need to learn this skill.

The sky was so clear, and you could see every star, including the Milky Way.

The moon was shining off of the water.

There was a slight breeze.

Stillness everywhere except for the ocean water crashing below.

I'm in awe of this moment. It felt incredible. Empowering. It's been a long time since I've seen the night sky like this off of the ocean where it's so clear.

It reminds me of being at my grandmother's house in West Texas (minus the ocean of course) as a little girl and laying down in the grass at night and gazing at the sky above. The town she lived in was so small and hardly any city lights so you could clearly see the stars.

I look back at those moments with fondness – like I am now in Oregon – in complete and utter gratitude.

Today was a speedy trip from our perfect overnight spot, which, by the way, had 5 bars of AT&T cell signal. So this was a HUGE plus!

The fog and marine layer were incredibly thick this morning as we traveled to Brookings for the last leg of the Southern Oregon Coast road trip.

Haystack rocks loomed in the distance in ocean waters and the fog circled its peaks. The sun was trying to shine through, but the fog smothered it a bit in some areas. 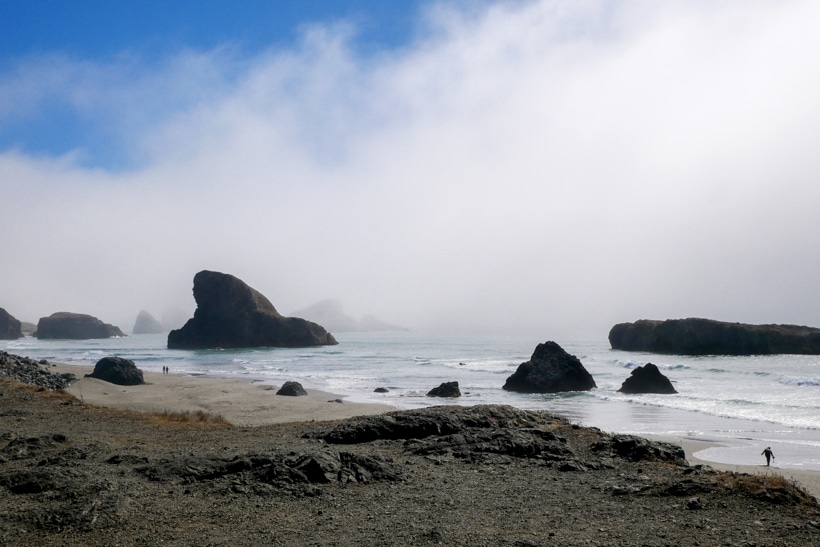 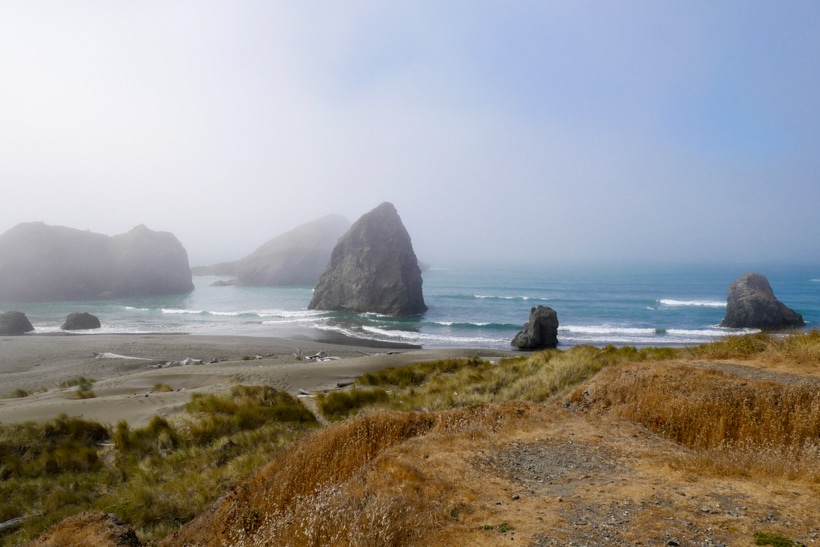 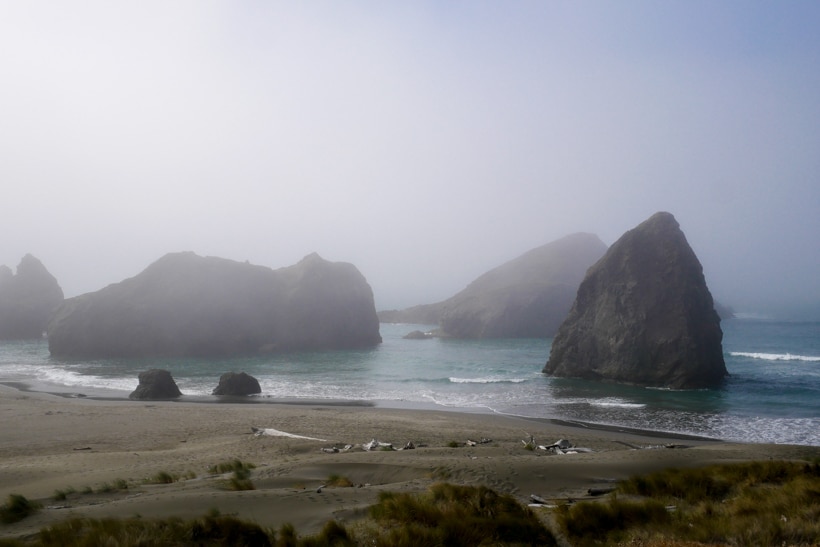 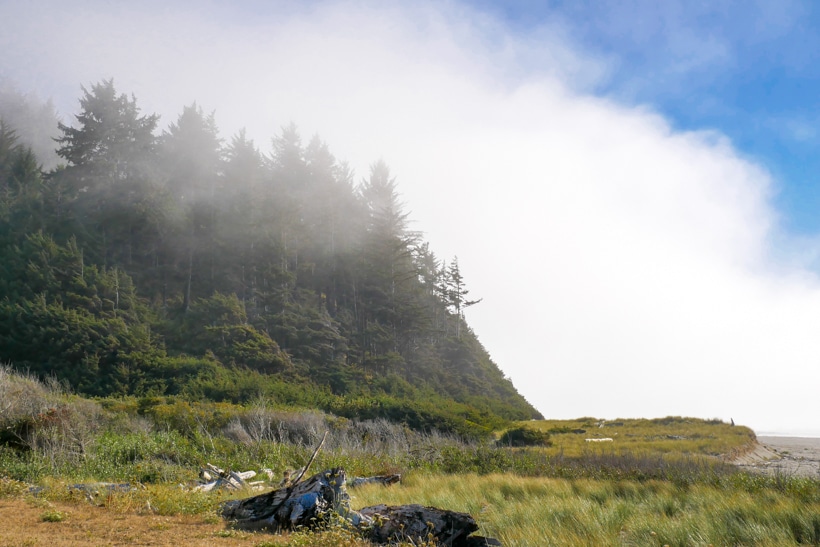 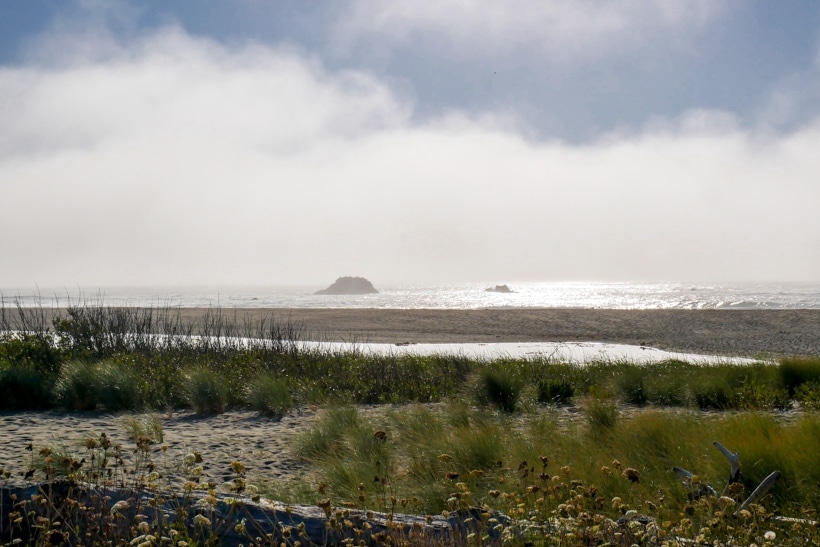 After stopping at multiple waysides to gawk at the beauty and snap some pictures, I made it to Brookings, Oregon which wasn't such a great place to find free overnight camping.

It's a busy little town, and the one place that seems to be okay to park at overnight was the Fred Meyer grocery store, but it was incredibly busy and crowded, and I didn't feel like staying there.

So I opted to keep moving, saying bye to Vicaribus, and moving on towards Crescent City, California so I could make my way back inland to Eugene, Oregon.

We still had one more veterinarian appointment for Lily on her tail wound before we left the area.

Have you been to the Oregon coast? What are some recommendations for future travel on the coast?

Related Post/Video All of Oregon Coastline: 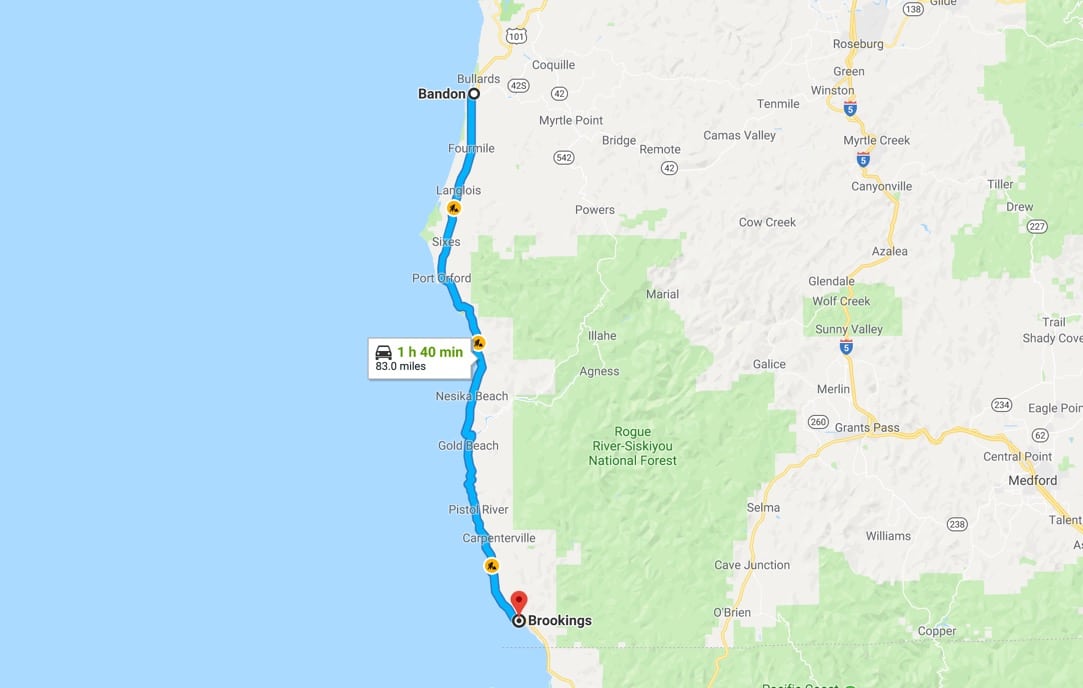 Weather Conditions: Pretty chilly at night with quite a bit of wind off of the ocean, but during the day it was in the 70's with some fog the further south we drove.