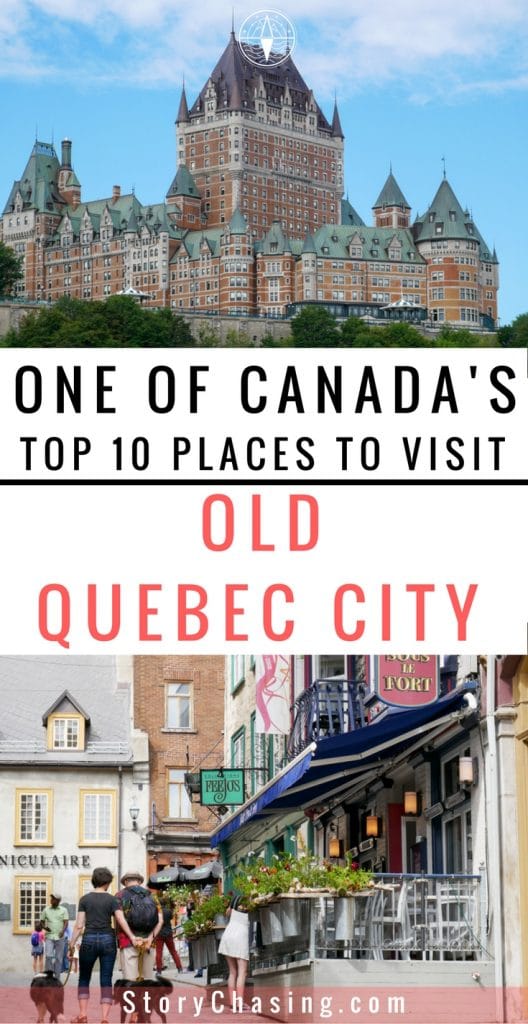 Old Quebec City is a place I’ve been wanting to visit for some time now.

I’ve always wanted to travel to Europe – and will sometime in the future – so being able to see just a taste of what Europe is like was truly an amazing experience.

Bonus you can drive to it or take a quick flight from the States.

Makes sense for the province of Quebec that is French-speaking – also referred to as French Canadian.

Some signs I had no idea what it was saying, but I could start to figure some signs out based on my limited remembrance of four years of French classes in high school.

High school was many, many years ago, but I could pick out certain words and figure it out. Google maps also helped with road directions since it still speaks English even after traveling over the border. You may find that last sentence to be odd, but have you ever pulled up a map in a Canada and it automatically changes from the United States miles to Canada’s kilometers?

Probably makes sense for somebody in Canada – or for any other country besides the U.S. for that matter.

Hey – you never know, Google might think it’s smarter and needs to auto change language after crossing the border into a French-speaking country.

My senses were definitely on overload with the language change. 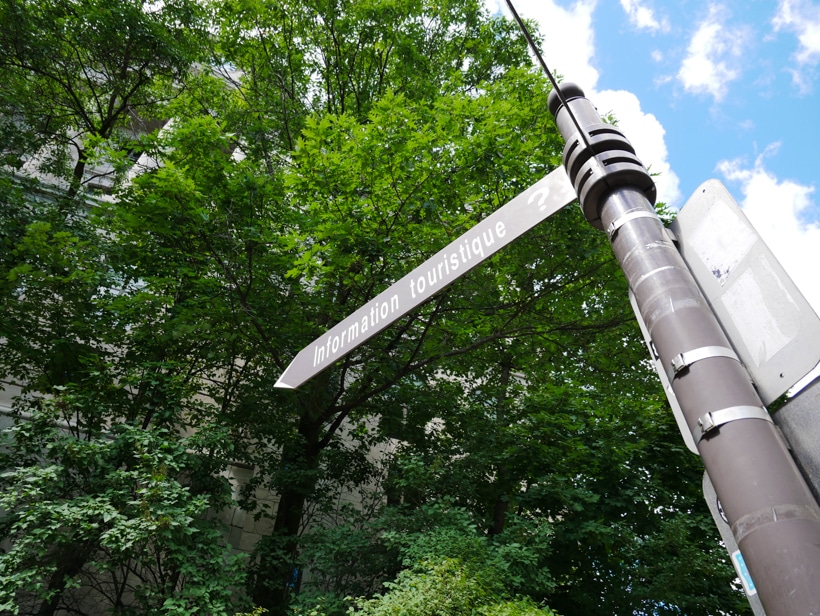 Should I Reply with Bonjour? 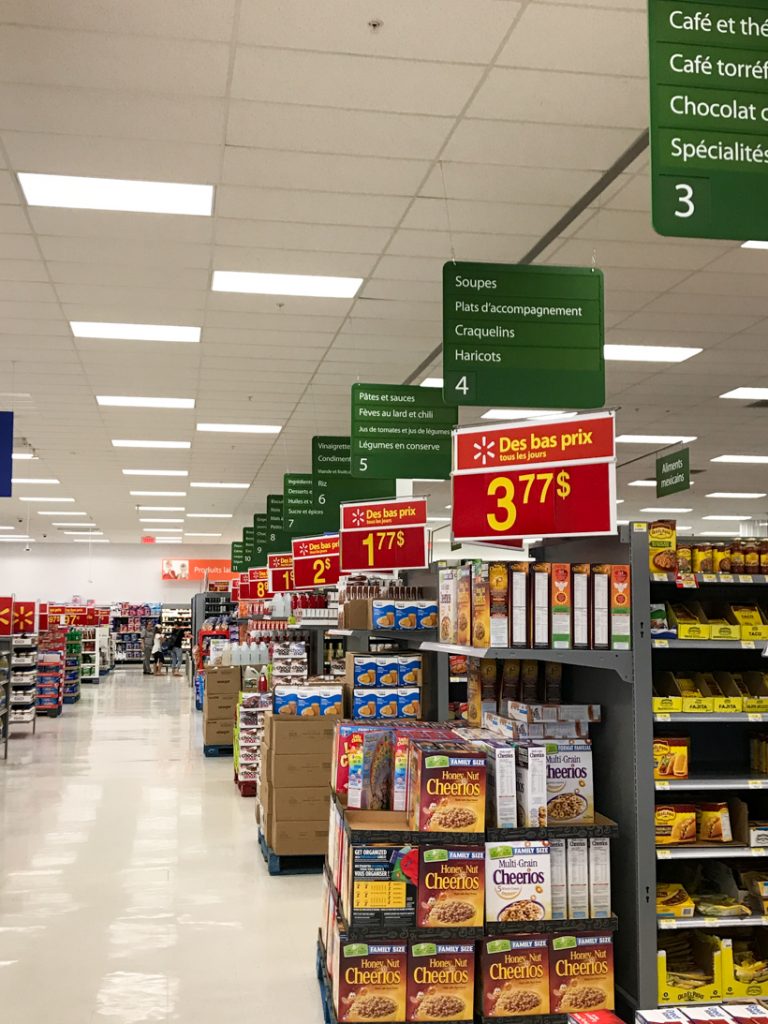 However I was unsure if when somebody said, “Bonjour” (hello in French) to me if I should speak the language and reply back with bonjour or just say hello in English. Here was my dilemma.

I originally went with the “bonjour” reply; however they would start speaking to me in French and then I would have to explain that I speak English and couldn’t understand their French.

If I instead replied “hello” they automatically knew I spoke English.

I also didn’t want to offend. What’s your take on it?

Most people would speak a little English back to me and some were better than others, but everyone was very nice about it. 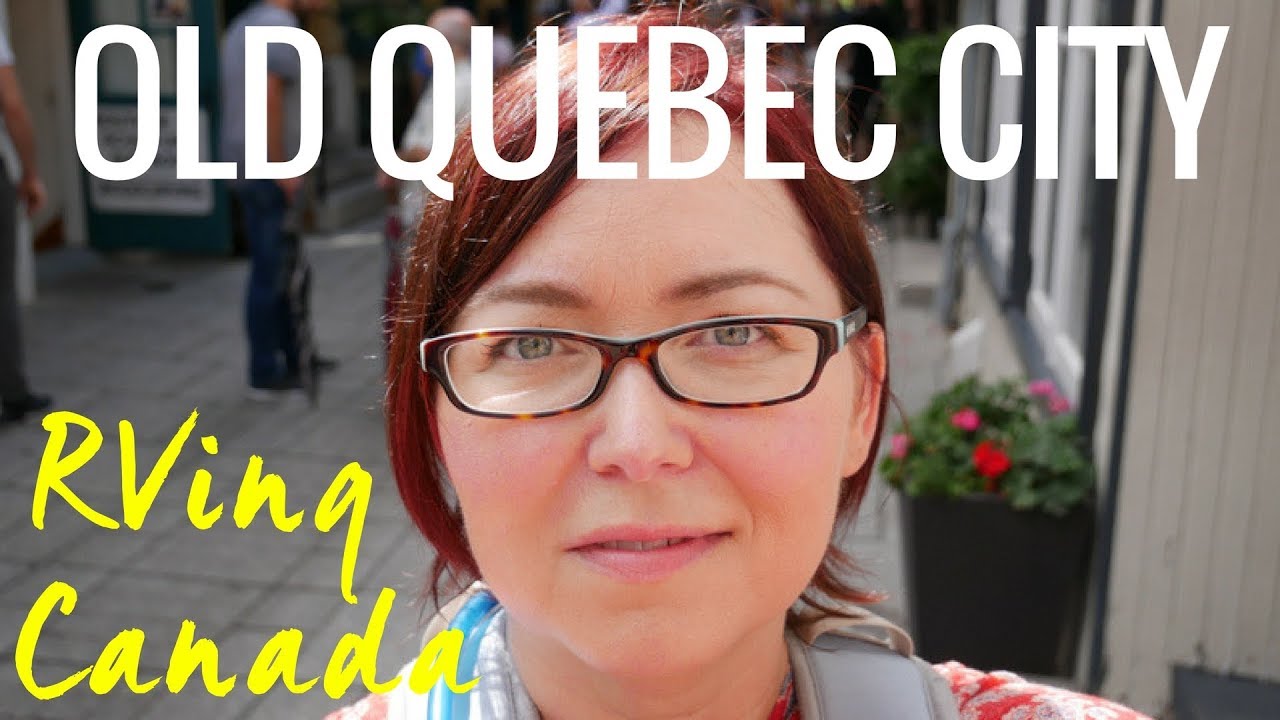 Getting Gas Isn’t So Simple in Canada

The only difficult situation I had was getting gas at Costco. I pulled up to the gas pump ready with my Visa, which is what the U.S. Costcos now accept; however when I went to insert the card, it flashed up 3 different options to choose from.

Oh dear, what are all of these options? I felt like it was a multiple choice quiz I was staring at.

All 3 options were in French. All 3 options had the word MasterCard in it and I had to choose something and there was a line of people behind me. I mean forget the fact that I’m in an RV with a 55 gallon tank that will take a lengthy time to fill up, but now I obviously need a MasterCard and I still don’t know what option to choose since I can’t read what the options are saying in French.

I could have broken out my Google translation app, but can you imagine all those people behind me patiently (or maybe not so patiently) waiting for me while I spell out all 3 sentences in French into my phone to find out what it’s saying?

I’m sure I would have gotten to the last sentence and forgotten what the first two translations were.

So in a split moment of panic, I looked over the gas pump and asked the gentleman on the other side pumping his gas if he spoke English.

Thankfully he spoke just enough so that he could tell me what these options were.

So I ran back into the RV, grabbed my MasterCard, hopped back out, inserted Costco card, inserted MasterCard and just like that, the pump decided it liked me and gave me gas.

I felt like I needed a stiff drink after that or maybe a lathering of calming essential oils!

Needless to say, I survived pumping gas in Canada.

Prior to traveling to Old Quebec City, I had done a fair amount of research to find out where I could park the RV and overnight. I figured with the relatively compact spaces near the city that pulling the RV in would prove difficult.

RV parks in the area were not too costly, but you know me – if I’m going to be gone most of the time and just sleep, I’d rather stay somewhere for free especially since I have solar panels and had already filled up the fresh water and dumped the black and grey tanks.

I found a Walmart across the Saint Lawrence River from Quebec City in the city of Levis. I figured I would just find the bus and ride the bus around to Quebec City.

The location at Walmart was perfect with other travelers and a bus stop near the parking lot.

Traveling from Levis to Quebec City on the Ferry

As I researched the fare of the bus and how much Canadian dollars and coins I would need to bring with me, I discovered that dogs aren’t allowed on the bus, unless they are in carriers, and Lily was definitely going with me to Old Quebec City.

I was a little shocked by this as my research had showed me that this area was very dog friendly.

Being that I didn’t have a carrier – and I wasn’t going to buy one – I discovered that the walk to the ferry, just down the hill, was only 1.6 miles. 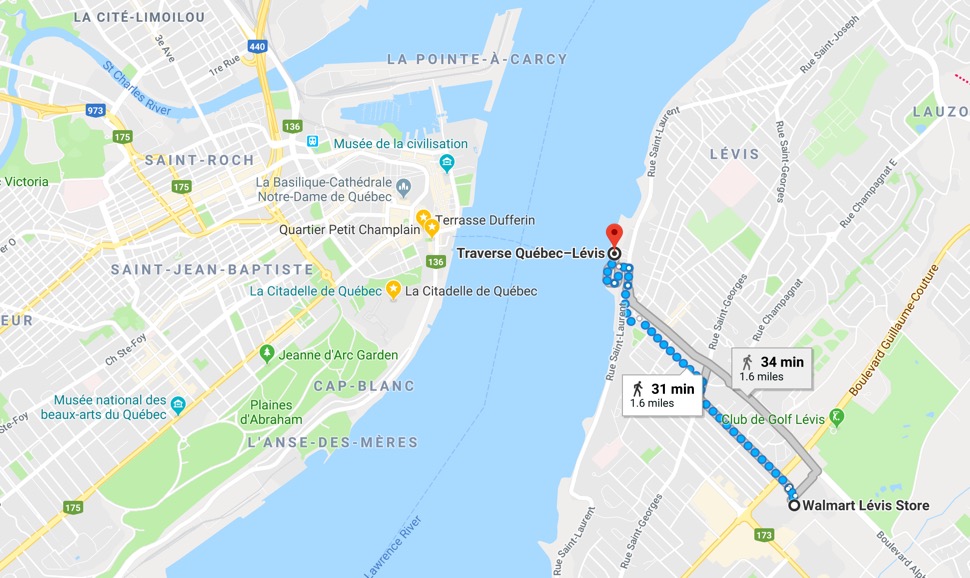 Not bad at all.

Until I started walking it.

I don’t know what the descent grade percentage is, but it’s super steep. You’re walking downhill the entire 1.6 miles. Not so bad going down, but coming up – well – that was another story. 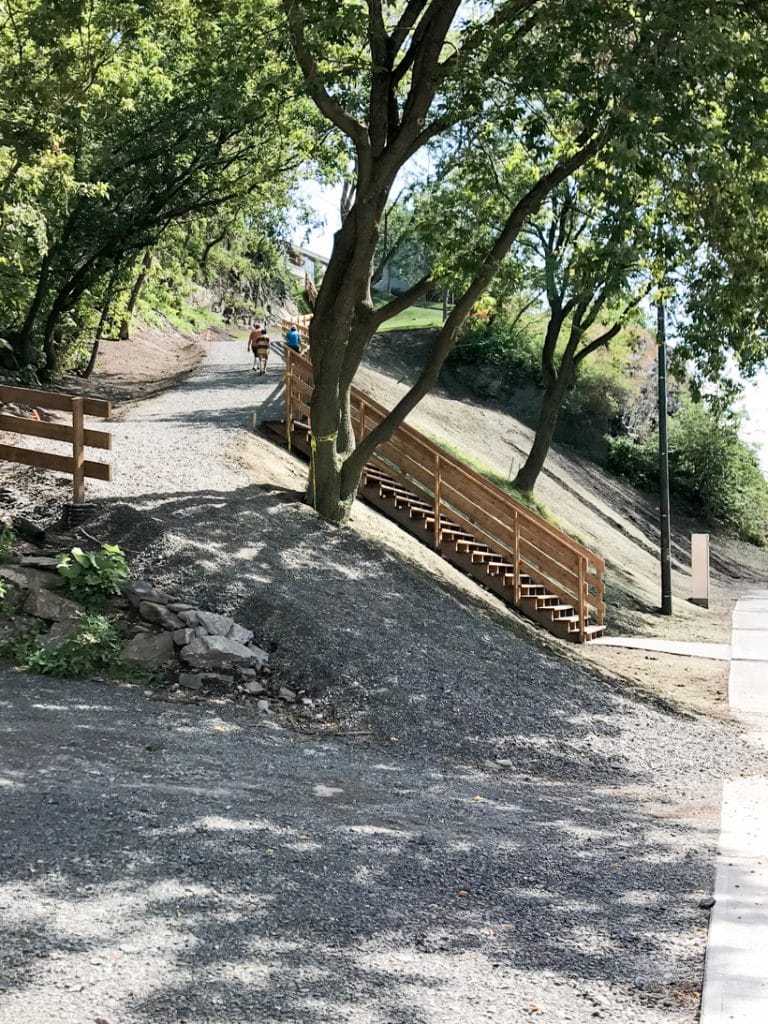 I’m losing weight and walking a lot, but I was a little concerned about the trek back up, especially with all the stairs and after spending the entire day walking in the city.

I was momentarily thinking I could stuff Lily in my backpack and catch the bus back up the hill on my way home. I’m sure Lily wouldn’t have liked that very much so I scrapped that idea and decided to walk the whole length back, stairs and steep inclines.

It was rough and it was hot out. I think Lily was even tired!

Stepping onto the ferry to cross the Saint Lawrence River to Old Quebec City was so magical. You could see the city and especially the Fairmont Hotel or Fairmont Le Château Frontenac.

The archticture off the building is impressive even on the other side of the river. Up close, it was even more impressive.

As you hop off the short ferry ride, you’re immediately in the Quartier Petite Champlain shopping and restaurant area with the beautiful old world, European feel. 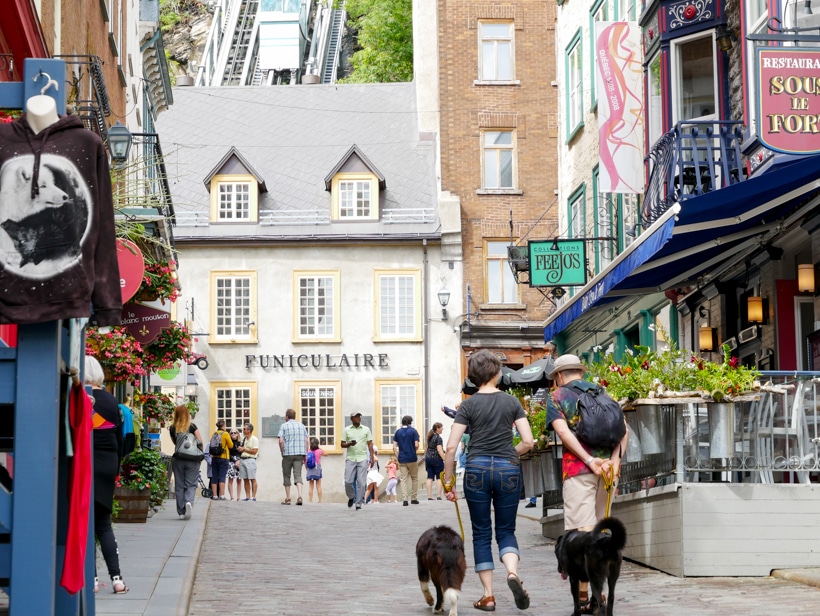 There are musicians on every street corner singing, playing instruments, and some doing both.

Not only was it a beautiful weather day, but the French influence and the European beauty was such a surreal experience. It couldn’t have been any better that day.

Lily and I walked the cobblestone paths, ducked in out of shops to explore, and ate at a little cafe, L’Escale, for breakfast and a latte. The terrace was beautiful at the top of the stairs and looking down on to the Quartier Petite Champlain and Lily was allowed to hang out there too. 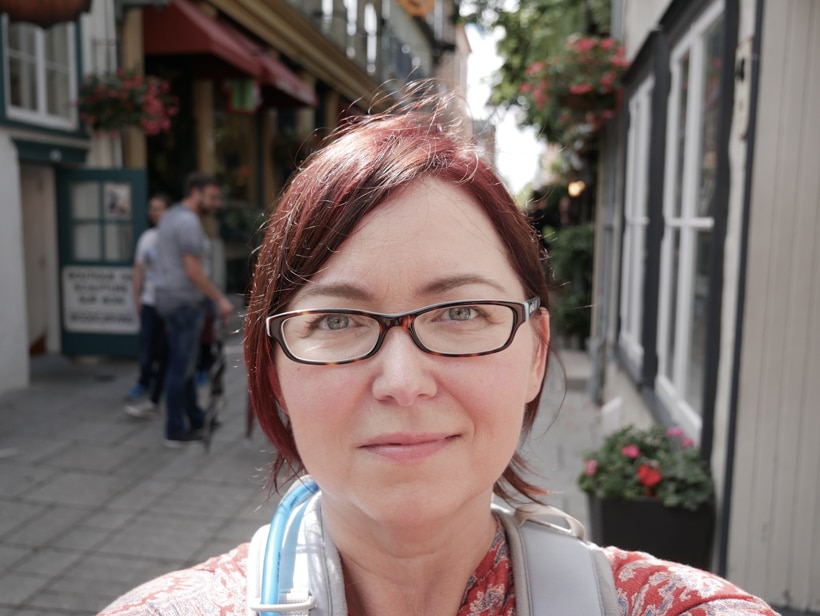 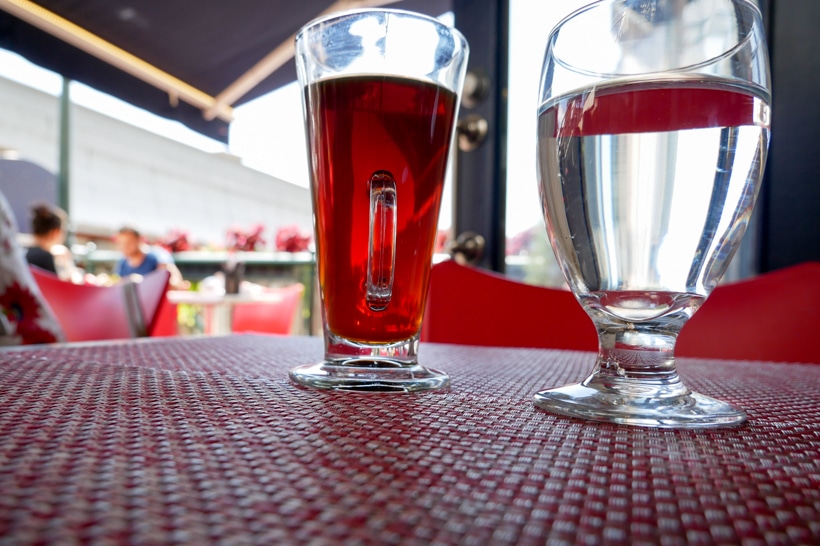 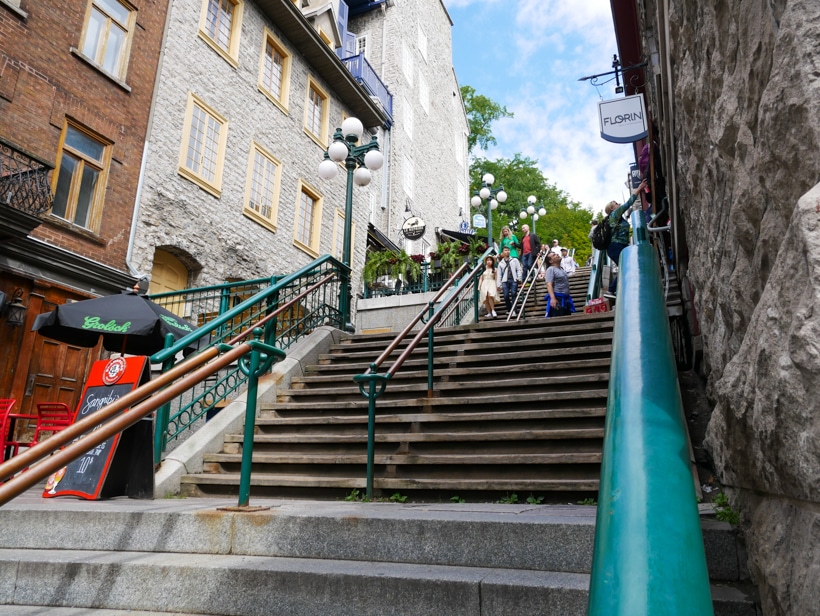 The city is definitely dog friendly. They allowed Lily in the stores and the cafe outside seating areas which I was so appreciative. Lily loves hanging out with me and walking around – not to mention all the attention she gets. 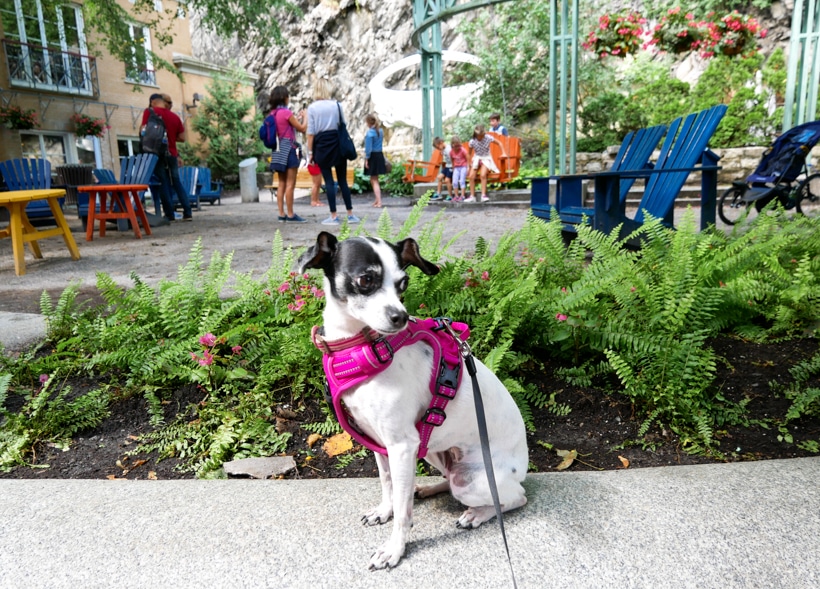 She was actually allowed in a gelato shop as well where I ordered a sorbet (no dairy for me) and sat outside at a little bistro table and people watched.

Lily sat in the chair beside me and so many people wanted to pet her or comment on how well behaved she was – and of course my sweet girl is well behaved. 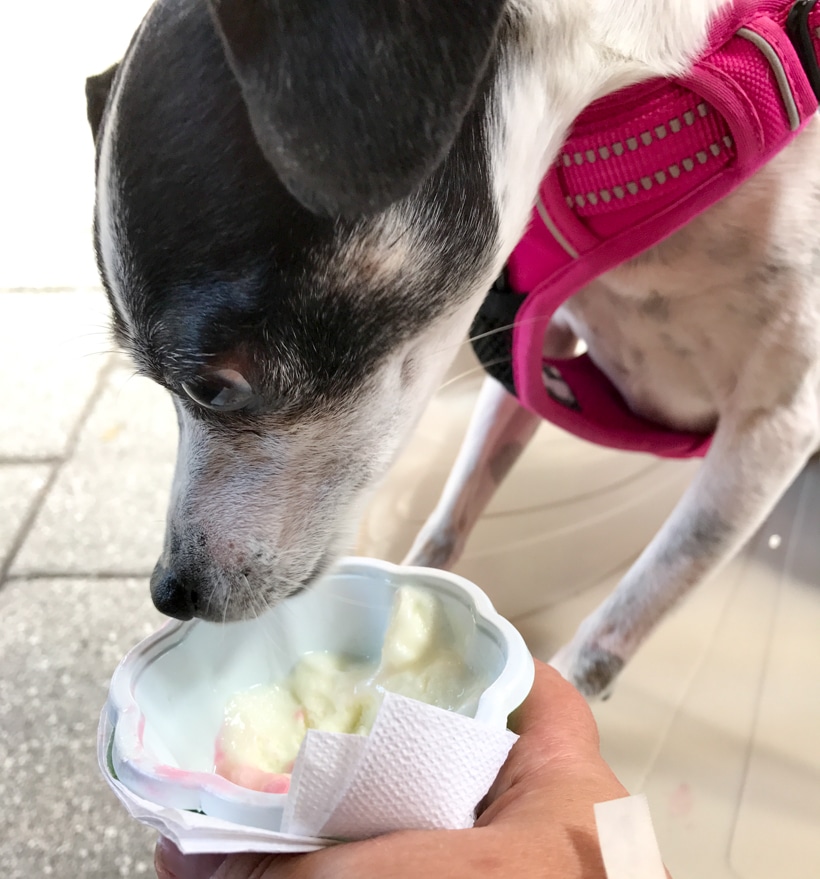 There is an upper and lower town of Old Quebec City so in order to get to the upper part, you must either climb the rather lengthy flights of stairs up the side of the cliff or take the electric funicular cableway, Funiculaire du Vieux-Québec, up the side. 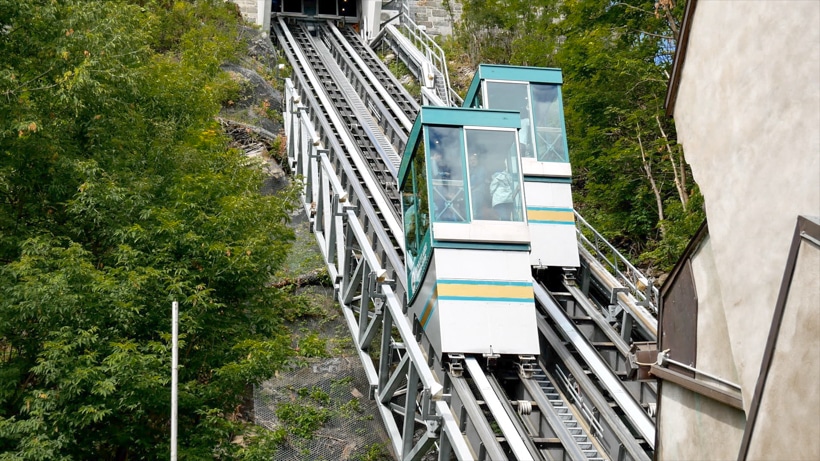 The eclectric funicular cableway opened in 1879 and rises 195 feet between the upper and lower towns and costs $3.00 Canadian to travel one way.

I opted for the stairs since it costs $0 and, well the exercise would be good for me. It was’t too bad. I stopped once on the way up to catch my breath, but I made it.

I had such a wonderful experience in Old Quebec City and will definitely return.

By the way, in case you’re wondering, on this day of touring Old Quebec City I ended up walking 13,692 steps, climbed 22 floors, and walked a total of 5.3 miles.

I was exhausted after that trip, but what a fantastic day!

Have you been to Old Quebec City? How do you handle the language barrier? 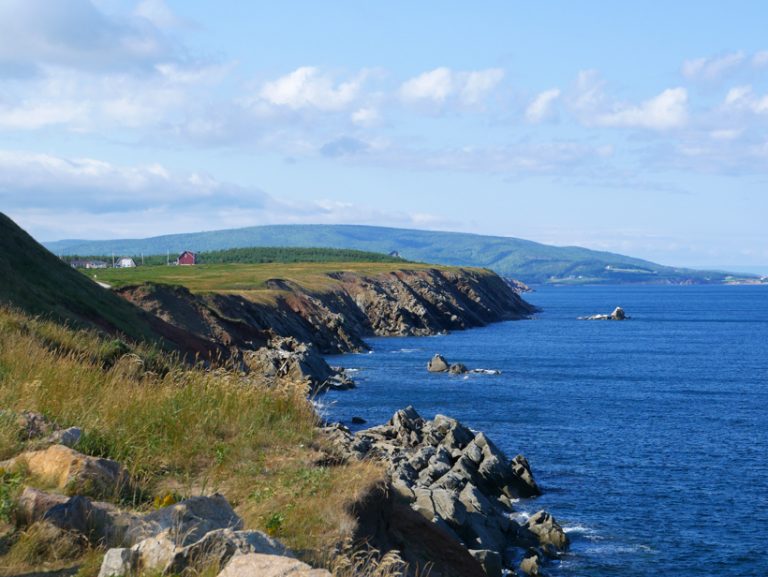